An interesting combined tour combines simple biking in the mountains of the Southwestern Tien Shan in the area of ??the famous ski resorts Chimgan, Beldersay in the Ugam-Chatkal National Nature Park, around the Charvak mountain reservoir, among the unique nature of Zaamin, in the area of ??the picturesque Nuratau ridge and Aydarkul Lake, Kyzylkum desert (with a safari on camels-Bactrians) and through the petroglyphs of Sarmysh, as well as an excursion program around the ancient cities of Uzbekistan, where tourists will find world-famous medieval monuments of Bukhara, Shakhrisabz, Samarkand and city-tour of the capital of Uzbekistan - Tashkent. 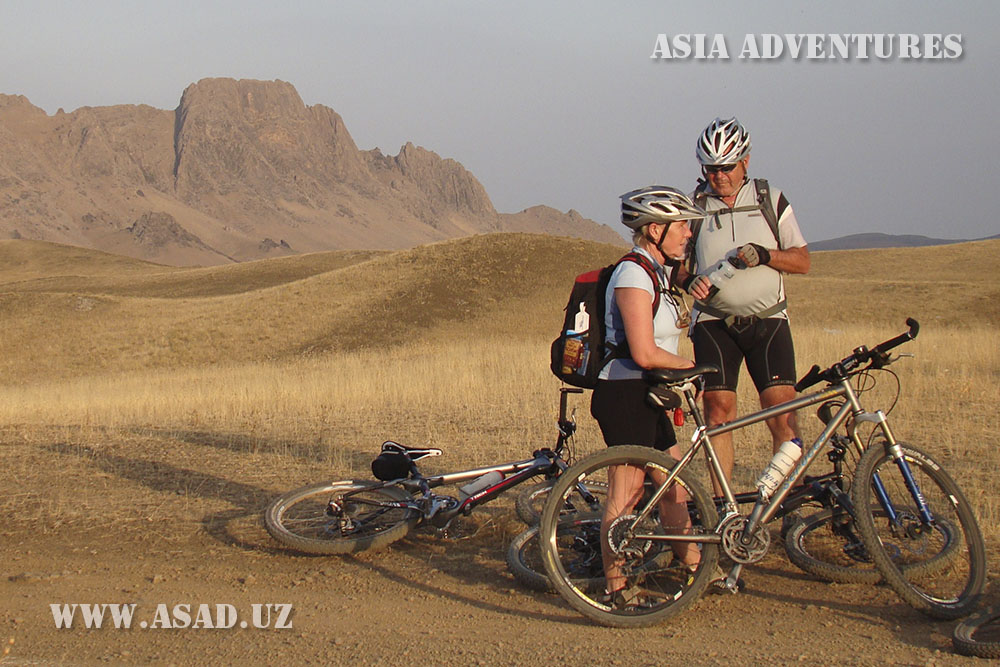 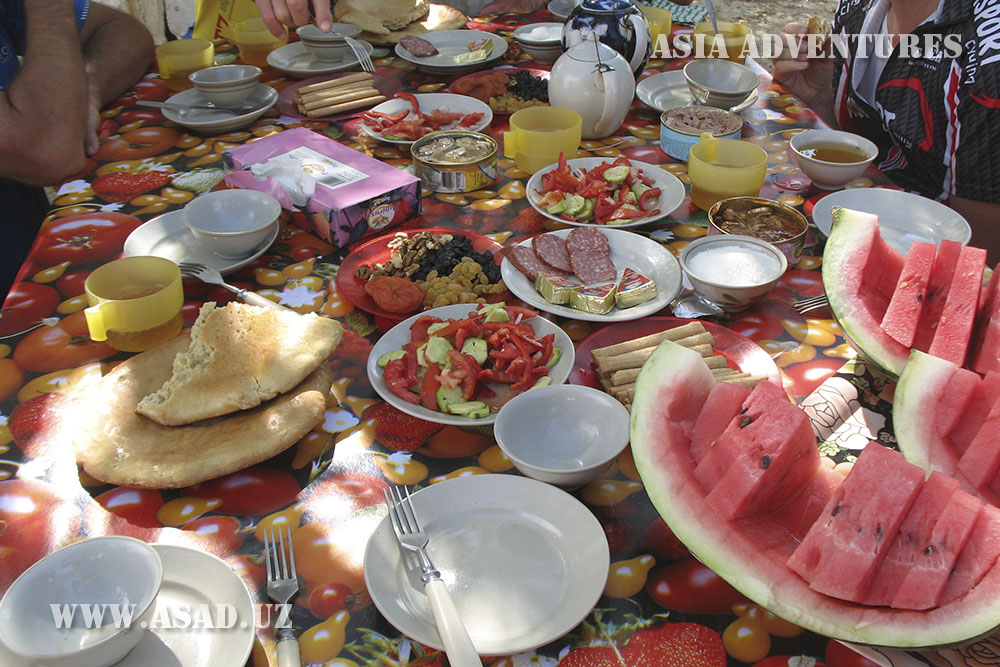 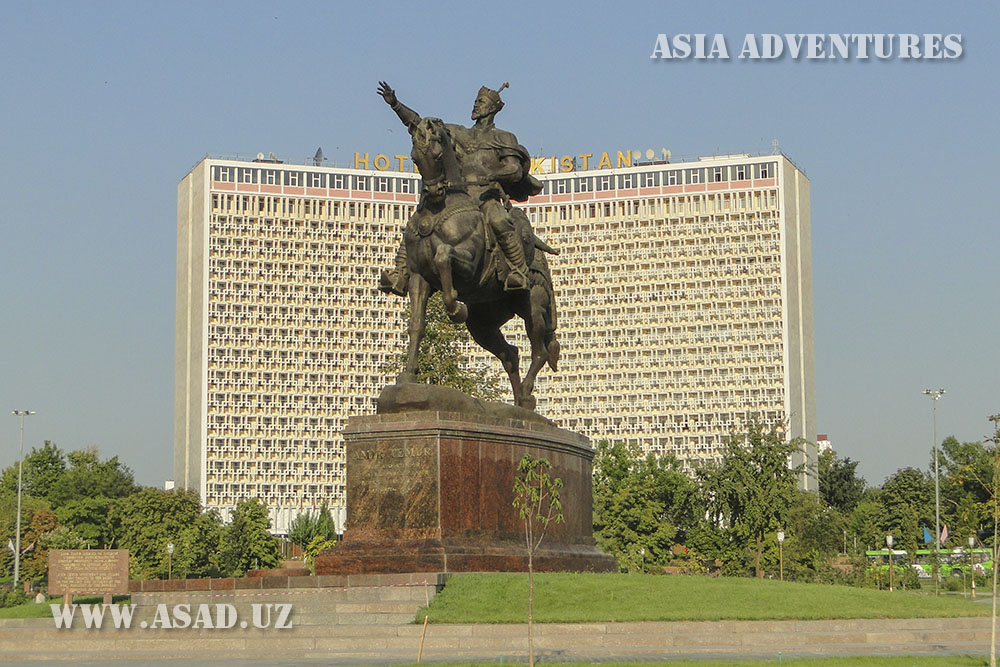 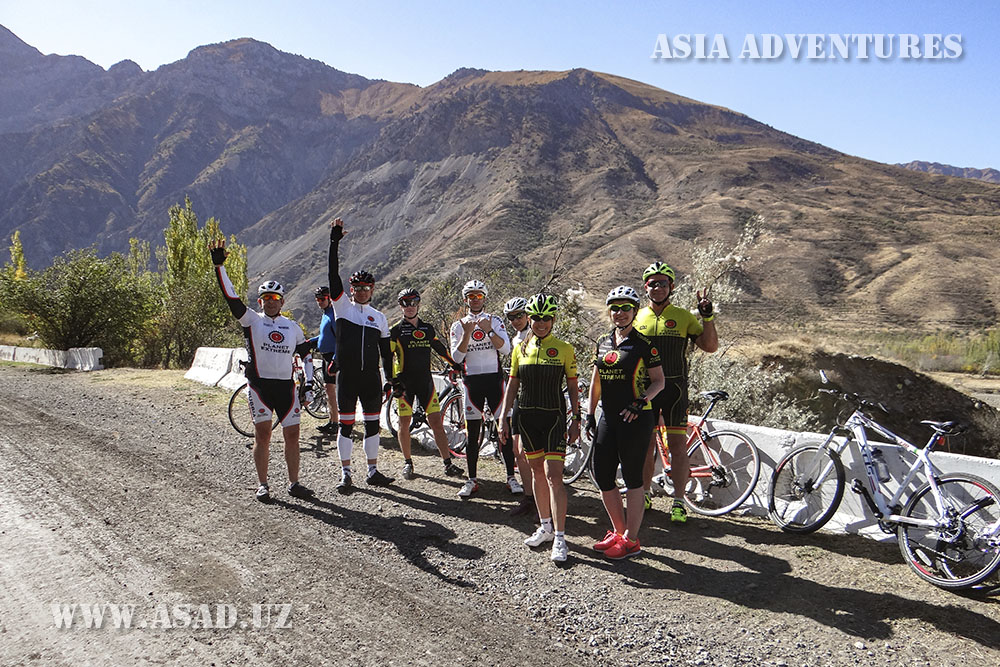 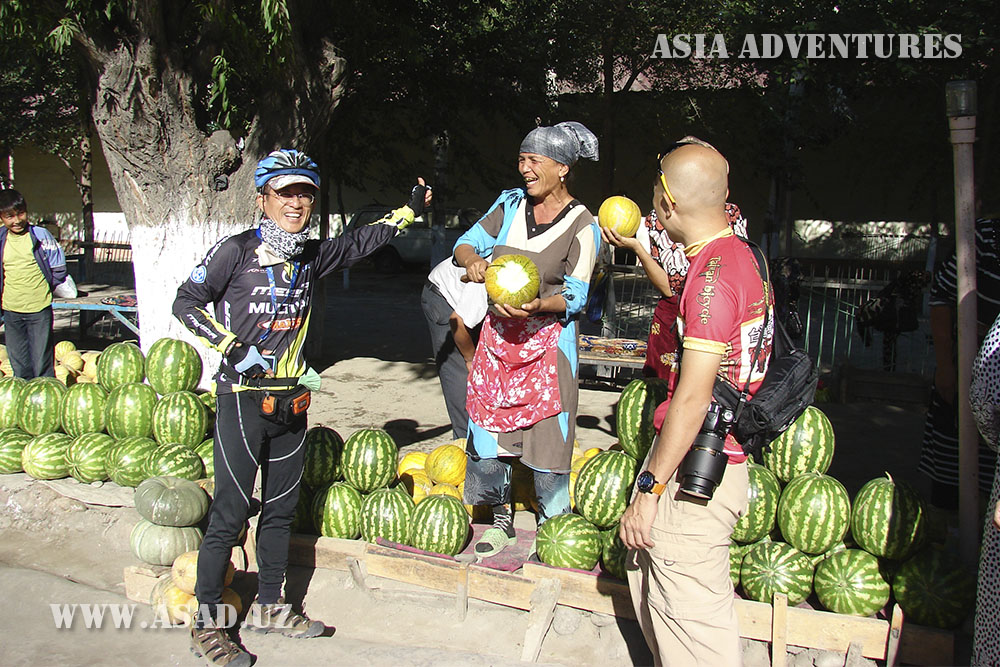 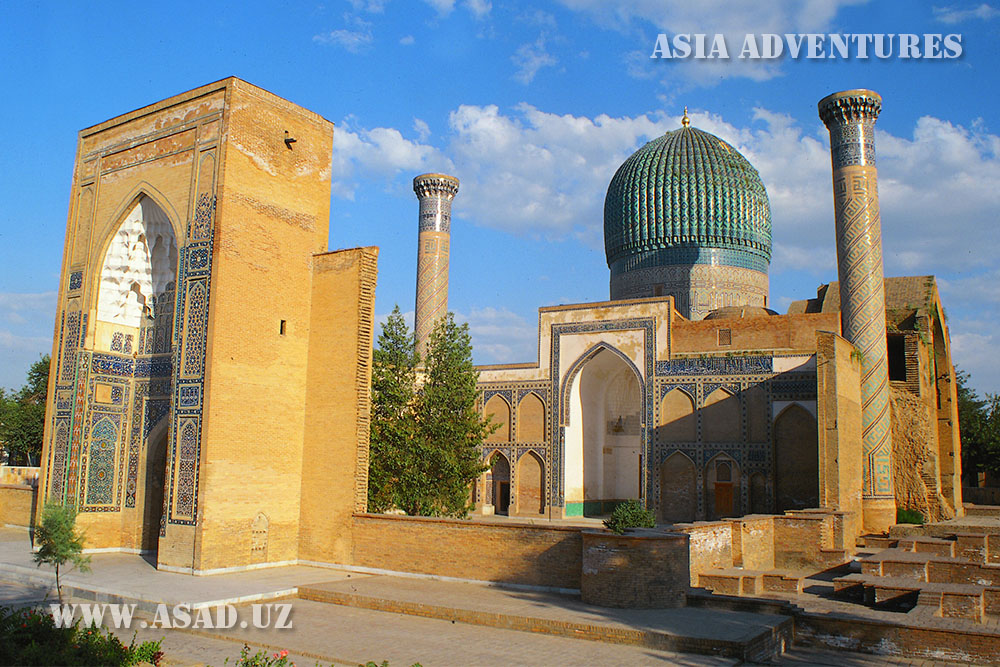 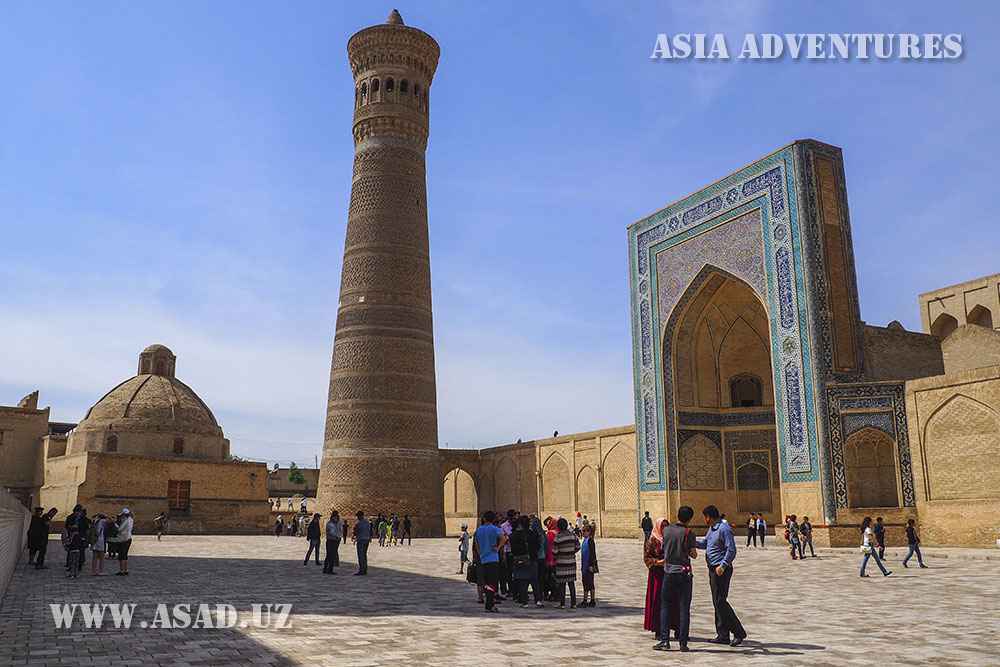 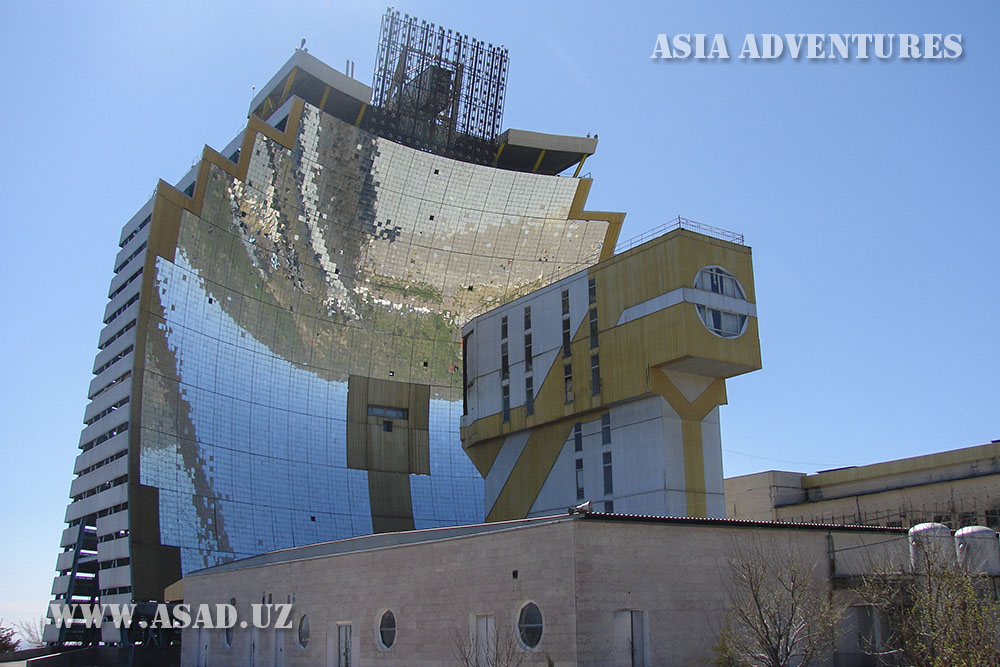 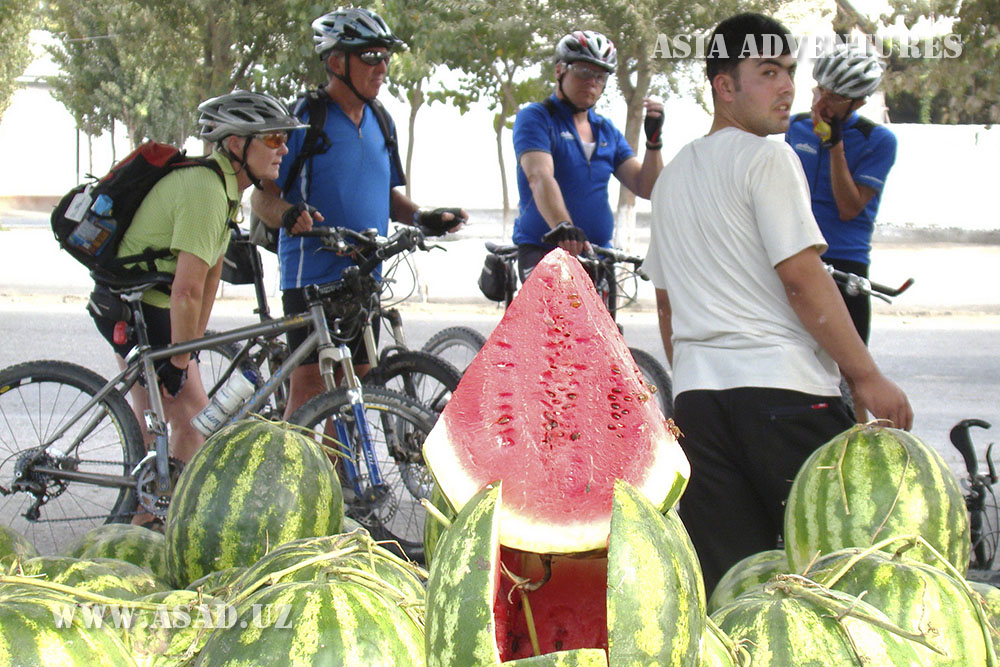 Biking in the spurs of the Chatkal ridge (35km, -100m, + 250m, -100m, + 200m, asphalt). We will drive along the hills in the foothills of the Tien Shan, through the exotic mountain villages of Nevich, Sanginek, Sukok, Zarkent, where the best varieties of wine grapes risen under the gentle sun of Uzbekistan. Tourists can taste wine at one of the houses of local residents. Accommodation in a guest house in Kumyshkan (1300m).
3

Biking Kumyshkan - Karamanas in the direction of Ugam-Chatkal National Nature Park. The road passes through picturesque villages around the Surenata ridge. On the way, tourists will take an excursion to the unique FIZIKA-SUN Solar Complex. Built in the 80s of the last century, the complex still amazes with its fantastic "space" view, reminiscent of either a launch pad or an alien station, see the link: http://centralasia-adventures.com/ru/sights/geliokompleks_fizika_solntce.html Along the way biking offers excellent views of the mountains and surroundings. Transfer by bus to the mountains of the Southwestern Tien Shan (70 km, 1.5 hours). Accommodation at a hotel on the shore of the Charvak reservoir (1020m).
4

Scenic views of the surrounding mountains open along the way. As you can see the ridges - Ugamsky, Pskemsky and Karzhantau, in the distance - the blue of the Charvak reservoir. The route runs along the spurs of the Chatkal ridge, from the Aksai gorge through the Chimgan mountain village and further along the Charvak mountain reservoir to the Nanai village, crosses the bridges of the Chatkal, Koksu and Pskem rivers along the way. Further ascent through the village of Sidzhak, a photo session at the top observation point of the route above the reservoir and a spectacular descent to the town of Charvak (-510m). Panoramas of the Charvak reservoir and the mountains of the Southwestern Tien Shan during biking will not leave you indifferent. Transfer to Tashkent (70 km, 1.5 hours).
5

Accommodation in a guest house (1700m). Lunch at a national cafe. Hiking in the mountains (8 km, + 270 m, - 430 m, ~ 4 hours). The route is laid along a good path through green meadows with a variety of mountain flowers and thickets of juniper forest, which has a healing effect on the respiratory system. http://centralasia-adventures.com/ru/sights/zaamin_park.html
6

Tourists will drive along the green foothills of the northern slopes of the Turkestan ridge, see mountain peaks crowned with "snow caps", nature untouched by human activities, mountain juniper forests, rare mountain settlements in these places. http://centralasia-adventures.com/ru/sights/zaamin_zapovednik.html Then we change to the bus and go to the city of Jizzakh - the capital of the Jizzakh region (50 km, 1 hour). Hotel accommodation.
7

Transfer to the starting point of biking. Biking.

In the morning, transfer by bus from Jizzak to the Pistalitau Mountains, 660m (50 km, 1 h). Then tourists change to bicycles - the biking route runs through the bizarre rocks of Ortachek, similar to the ridge of a dinosaur, along the Nuratau ridge to the picturesque village of Hayat (~ 60 km, + 100m, -100m, + 400m, dirt road, asphalt). First, we drive along an asphalt rural road, then the group will have to drive around the rocks of Ortachek on a good dirt road and go down to the village of Yangikishlak. Tourists along the way can get acquainted with the life of local residents, the unique traditional construction of houses. The uncomplicated relief of the road makes it possible to enjoy the beauty of the area. After lunch in a national cafe, we smoothly ascend along the asphalt road to the village of Hayat. Overnight at the guest house (960 m).
8

Biking Hayat-Kyzylcha (70 km, -690m, asphalt, dirt road) on the way to the yurt camp in the Kyzyl-Kum desert.

The route runs along an asphalt rural road, on the left there are spurs of the Nuratau ridge, on the right, in the distance, the surface of Lake Aydarkul is occasionally visible, there are few cars, and villages are also rare. On the way, an excursion to the exotic village of Majrum (5 km from the main road, + 180m, -180m) is possible - here you can see the largest thousand-year-old tree of the Nurata reserve - the eastern biota. In circumference, its trunk reaches 8.5 m. Transfer by bus from the village of Kyzylcha to the Safari yurt camp (60 km, 1.5 hours). Accommodation in yurts (270m). Camel riding, walking in the desert, swimming in the Aydarkul lake (5 km from the yurts) is possible. After dinner - songs of the local akyn (folk singer) by the fire.
9

Today is the final day of biking. The route goes along a rural road through picturesque spurs of small mountain ranges to the village of Karmana (40 km, -430m, 80% asphalt, 20% dirt road). Tourists can observe the idyllic rural life of Uzbekistan - summer shepherds, grazing herds of sheep and cows, exotic villages in the national style. We pack the bicycles and get on the bus. Further our way lies in the fabulous Bukhara - one of the most ancient cities of the East. On the way, stop at the pottery workshop of the famous Narzullaev dynasty. Excursion, master class and family lunch. Upon arrival in Bukhara, accommodation at the hotel. Relaxation. Dinner with folk show.
relief profile Karmana - Bukhara
11

Excursion in Bukhara: Lyabi-Khauz complex (XVI-XVII) - the "heart" of old Bukhara, a favorite place for recreation of residents and guests of the city, includes Nadir Divanbegi madrasah and khanaka (XVII century), Kukeldash madrasah (XVI century), the oldest artificial pool (hauz) - in Central Asia (XVII century), surrounded by centuries-old shady plane trees. the Poi-Kalyan complex (XII-XVI centuries) - a visiting card of Bukhara with the Miri-Arab madrasah (XVI century), the Kalyan mosque (XV century) with an original multi-domed gallery and the Kalyan minaret (XII century) - one of the the most ancient, miraculously survived during wars, invasions and earthquakes, a building with a height of 69 meters; Ayub Mazar (XIV - XIX centuries), a sarcophagus mausoleum over the ancient sacred spring, “appeared at the behest of the biblical Ayub (Job)”; trade domes Toki-Zargaron, Toki-Sarrofon, Telpak Furushon (15th - 16th centuries), where local craftsmen have been selling their products since ancient times. And today tourists can buy here magnificent souvenirs and products of folk crafts: gold embroidery, carpets, suzane, ceramics, chasing and much more. The Samanid Mausoleum (IX-X centuries) - a pearl of ancient architecture, a family tomb of the rulers of Bukhara and one of the first monuments in Central Asia, built of burnt bricks; Ark fortress (VII - XIX centuries) - the most ancient building of the city; the residence of the Bukhara emirs with a mint, a jewelry workshop, the office of the vizier, a prison, the harem of the emir;
12

Continuation of the excursion in Samarkand: the observatory of Ulugbek (1420) - the grandson of Tamerlane, the famous ruler and scientist-astronomer, Shahi-Zinda (XI-XVIII centuries) - the necropolis of the rulers and nobility of Samarkand, consisting of many magnificently decorated mausoleums, the exotic Siab bazaar ... 17:00-19.10 transfer to Tashkent by high-speed train Afrosiab. Hotel accommodation.
15 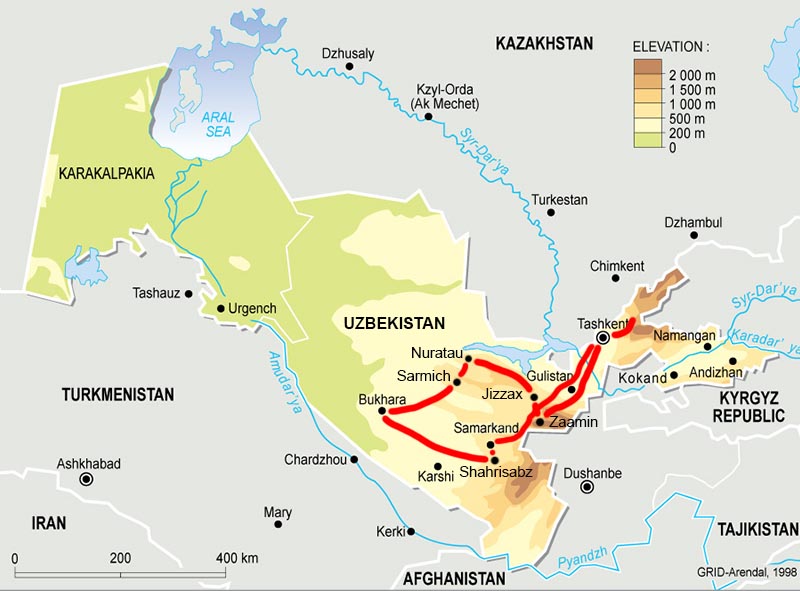