A fascinating tour repeats the road walked by great traveler Marko Polo in XIIIth century in Central Asia. In spite of the fact that from those times 7 centuries were gone many places still remain less visited. Your road will pass through the rough Pamir Mountains to Kashgar oasis and farther across Taklamakan and Goby deserts to the residence of KhabibulayKhan – the ruler of large medieval empire (Balik) nowadays Beijing. You will see the ruins of ancient zoroastric Kaahka, Yamchun, and Ratm fortresses in Vahan corridor, buddhistic Vrang caves, healing Garm Chashma hot springs, mountain Lake Kararul, famous Alay valley, Peaks (7000m) of Zaalay range, mountains of Afghan Gindikush, Kashgar oases, ancient legendary towns: Yarkend, Hotan, Aksu on The Great Silk Road; you will see the western part of the Great Chinese Wall in Dunhuang, terracotta warriors in Xi’an, an emperor palace in Beijing’s “Forbidden City” and many other outstanding monuments and nature objects. 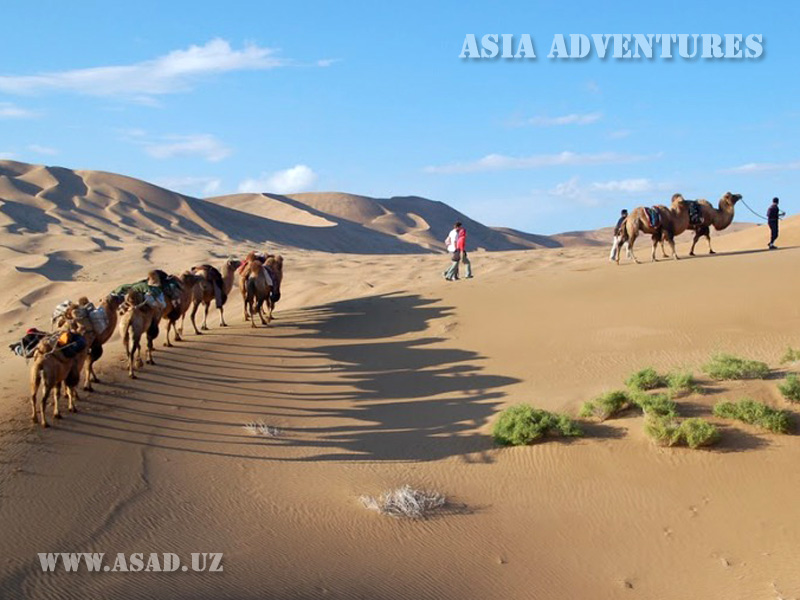 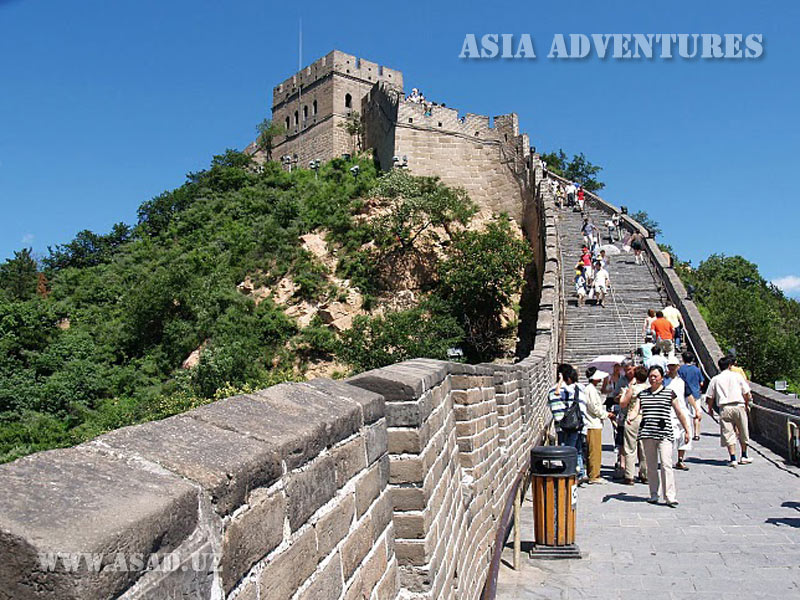 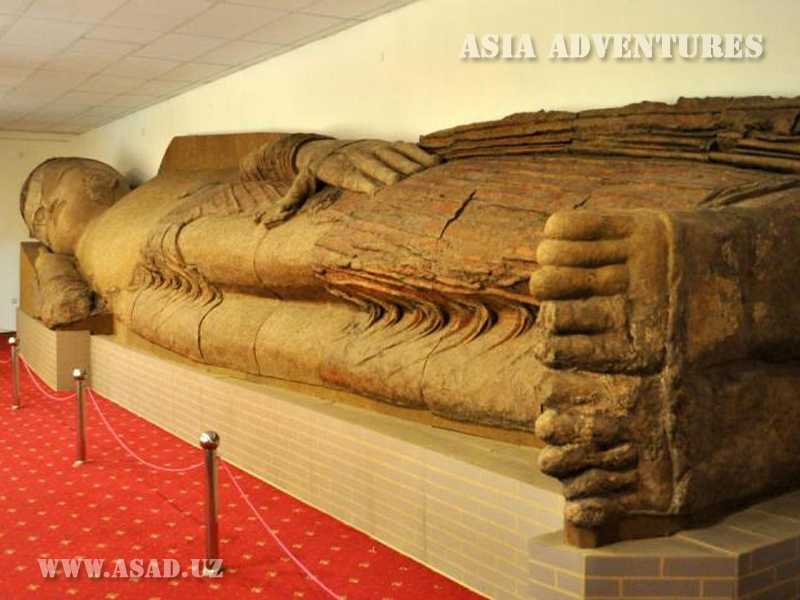 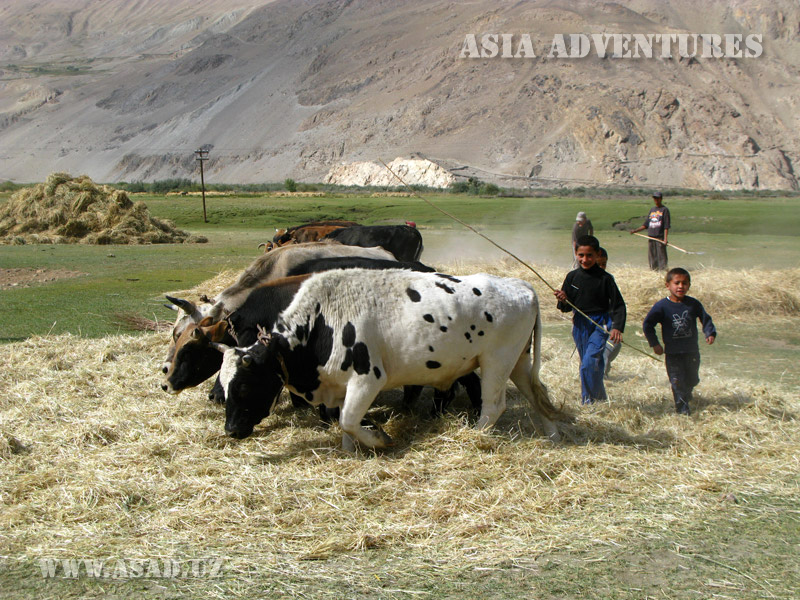 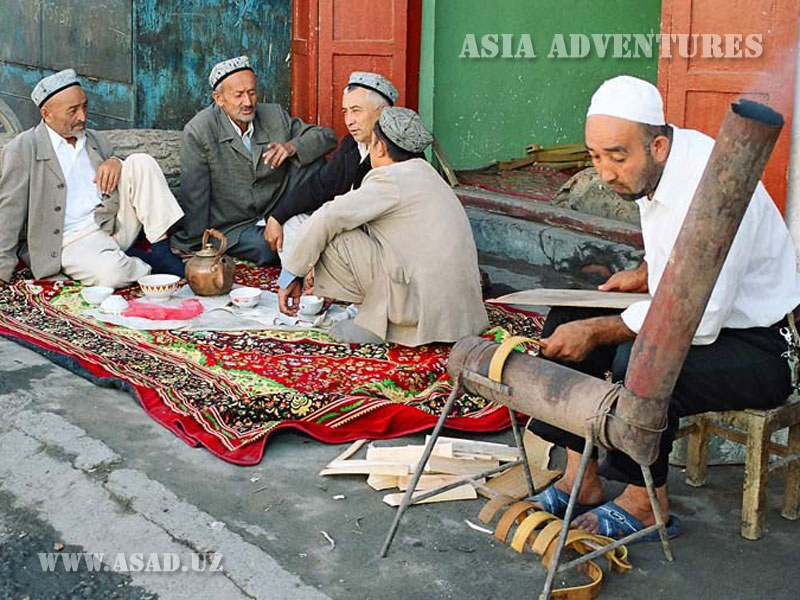 Arrival to Dushanbe – the capital of Tajikistan. After rest sightseeing of the city tour: Independence square, Samani monument – the founder of Tajik State system, Rudaki Avenue, museum of antiquity with an interesting collection of ancient artifacts which includes 13 m. ceramic Buddha figure in nirvana (VII-VIIIcc.), Gissar fortress – the residence of Gissar beks. Observing the fortress and historical museum situated in ancient madrasah.
2

Transfer through Haburobad Pass (3252m.) to Kalaykhumb (280km, ~8 hours) – small settlement on Pamir high road. En route – the unforgettable mountain landscape: “Tulip” cave, Blue Lake, building Rogun Hydroelectric Power Station with the highest dam in the world (325m.), which is planning to be the most powerful in Central Asia. Overnight in guesthouse.
3

Transfer to Yamg settlement (150km,6hours), on the way visiting the famous Garm – Chashma hot spring (40km), antique Kaahka and Yamchum fortresses of fire-worshippers, the saint Fatima-Bibi thermal spring. Acquaintance with the local people’s way of life. Overnight in houses of the local people.
5

Brief excursion in Muboraka Vahan (1843 – 1903) museum – “Leonardo de Vinci” of Pamir, self-taught inventor who was making by hands from improvised materials musical instruments, papers, looms, stony sun calendar and etc. Transfer to Lyangar settlement (120 km, 8 hrs) - a rather large mountain settlement on the fusion of Vahan and Pamir rivers. Here begins Pyanj river and a famous Vahan “corridor”. Walking along picturesque settlement to petroglyphs and to the ancient fortress Ratm. Night in the house of local people.
6

Transfer via Khargush Pass (4344 m) and picturesque Alichur Valley to Murgab settlement (170 km, 6 hrs). The valley is situated on about 3000 m height. It is surrounded by snow covered mountains. On road one can observe the yurts – the abodes of locals, grazing yaks. Murgab - is a small settlement near the Chinese border, the most remote district centre of former USSR. From here Muztag-Ata (7546 m) the dominant peak of the region is revealed. Accommodation in homestay.
7

Transfer to Saritash settlement through the highest in CIS Ak-Baytal Pass (4652m) and picturesque mountain Karakul Lake. The vast lake is surrounded from each sides with mountains. Up to the end of June one can see snow and ice on its banks. On a good weather from here you can see Lenin Peak (7134m.). Introducing to locals’ way of life, walking along the lake. In the evening descend to Alay valley to Tajik-Kyrgyz bordobo border, crossing the border. Here is the best and splendid panorama of Alay and Zaalay Ranges with ever ice peaks. Night in guesthouses or in yurts.
8

Transfer from Sari-Tash settlement via Irkeshtam Pass (Kyrgyz-Chinese border) to Kashgar. On the road splendid views on surrounding mountains and Kizilsu river.
9

Day 12. Drive from Hotan to Mingfeng.

In the morning drive from Hotan to Mingfeng (300km, 4 hours). Excursion in a historical museum, visit the uyger family, an exotic Da Mazar settlement near the magic, reserved, ancient Niy town.
13

Transfer to Kuqa (700km, 9 hours) via great Taklamakan desert (with uyger “Death Sea” or “Place from which you won’t come back”) – one of the greatest sand desert in the world. ( the lengths from the west to the east is more than 1000km, width about 400km, the sand area is more than 3000m2 . A hard but interesting day. On the road you will see the sea of barkhan sands and a wonderful Tarim river. The fantastic landscapes.
14

Day 14. You will visit one of the biggest and interesting cave temples of China.

Kuqa is a small but very a important town on the silk road. You will visit one of the biggest and interesting cave temples of China – the complex of Kizil Thousand budda caves, the famous Kuqa mosque in the old city, Great Canyon, the Kizil Garh Beacon Tower. In the afternoon transfer to Korler (300km, 5-6 hours).
15

After breakfast transfer to Turpan (450km, 6-7 hours). In the afternoon excursions along the ancient city: Karez Well-ancient irrigational system of wells and channels for gathering the underground waters from Tyan-Shan mountains, Emin (Suleyman) minaret and mosque (XVIII c.) In the evening you can enjoy the uyger folklore show.
16

Arriving to Dunhuang – an important trade city on the Silk Road. This oasis is situated on the edge of Gobi desert and surrounded by sand dunes. In IVth century this town was full of traders and buddhists. Excursions: Magao caves and grottos. The quantity of the caves is about 500 and each of them is full of buddhistic manuscripts, sculptures and frescos. The total area is 45000 km2. The complex is included by UNESCO to the list of masterpieces of the world heritage. In the evening we will visit the Echoing-Sand Mountain and romantic “Crescent” Lake Yueya yuan. To the north from Dunhuag is situated the fortress of the Great Chinese Wall Yumenguan and to the south – the ruins of the Yanguan fortress. The fortresses represent gates through which were passing the caravans of camels and horses. After lunch transfer by train to Lanzhou. (19:02 – 09:19).
18

Arrival to Lanzhou – the capital of Gansyu province. Excursion program: the province museum with an interesting exposition “Cultural Heritage of the Silk Road”, Huan he river, White pagoda and Baytashan monastery.
19

Drive to Tibetan Labrang Monastery (the beginning of XVIIIth c.) - one of the major monasteries of of the Gelugpa (Yellow Hat) sect. The Labrang Monastery is included into 6 biggest lama monasteries of China. The Institutes of esoteric buddhism, theology, Tibetan medicine and astrology are situated on its territory. Lunch in Tibetan restaurant. Return to Lanzhou.
20

Day 21. Excursion to the City Wall.

Excursion to the City Wall (XIV c.) and the Tomb of great Chinese Emperor Zing Shi Huang who ruled in IIId c. B.C. The 8th World Wonder – the famous army of terracotta warriors and chariots the scale of which will impress your imagination. After dinner transfer to the railway station and farther night train till Beijing. (Z20 20:16 – 07:17).
22

Arrival to Beijing. Excursions: Tiananmen – the largest square in the world, Gugun-the imperial palace in a large “Forbidden City” with a history of 600 years. The Temple of the sky and Summer Palace.
23

Day 23. The full day trip to the Great Chinese Wall.

The full day trip to the Great Chinese Wall – one of the 7 wonders in the worlds and the symbol of China. Visiting The Saint Road which leads to the Ming tombs dynasty with the stony sculptures depicting the real and mythic animals. Grave of Ming dynasty – the only underground tomb with thirteen tombs of the emperors.
24