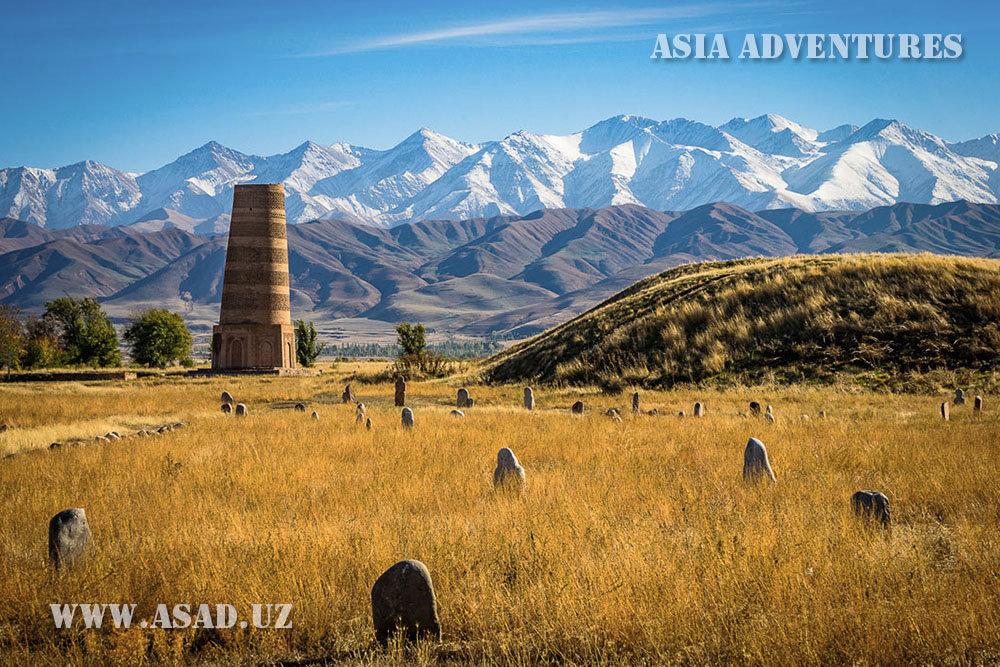 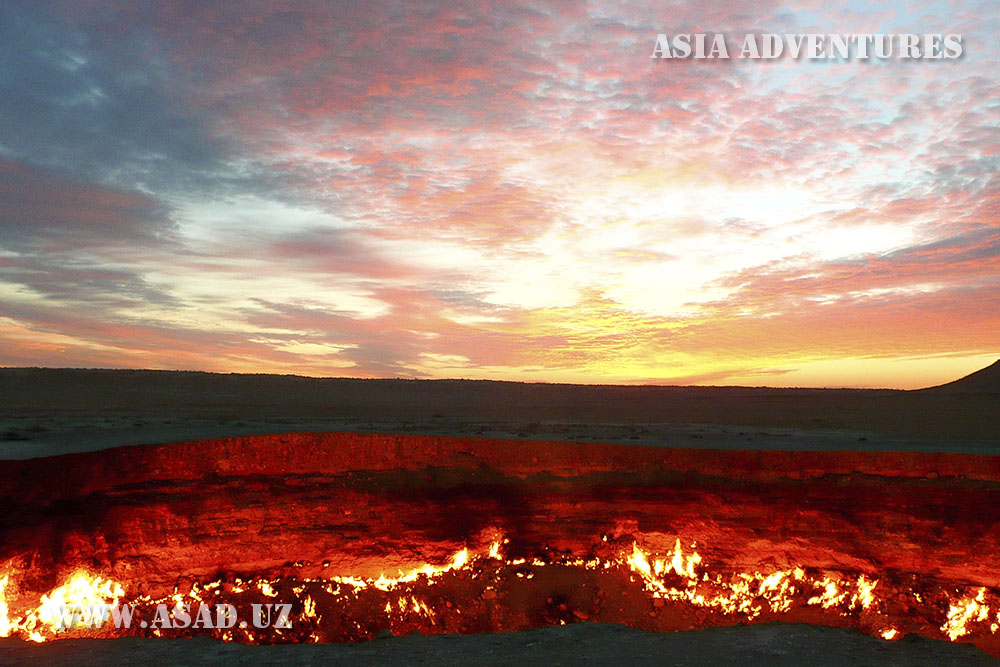 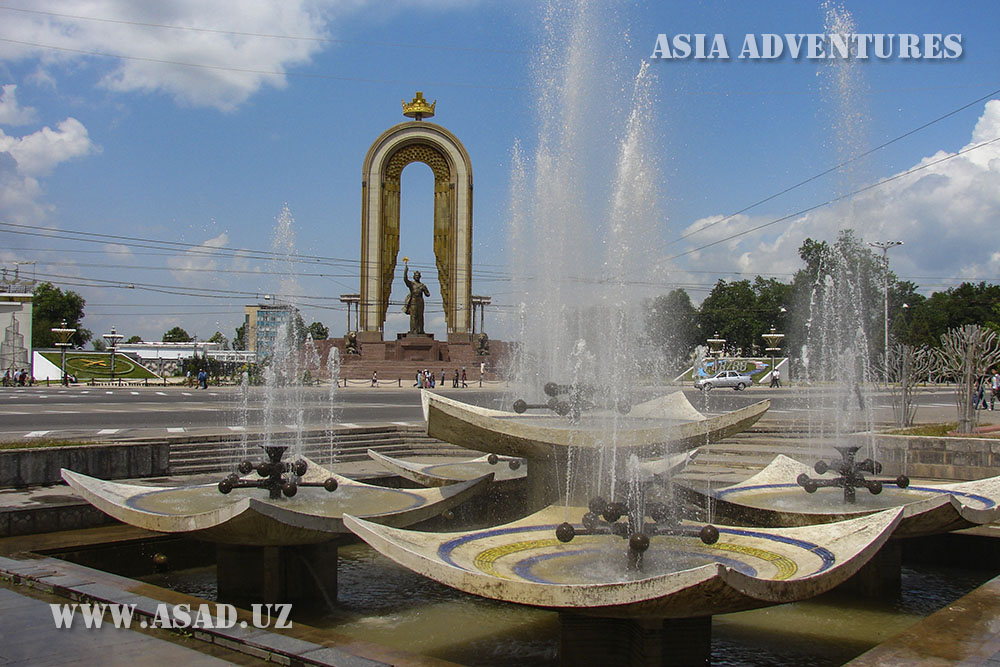 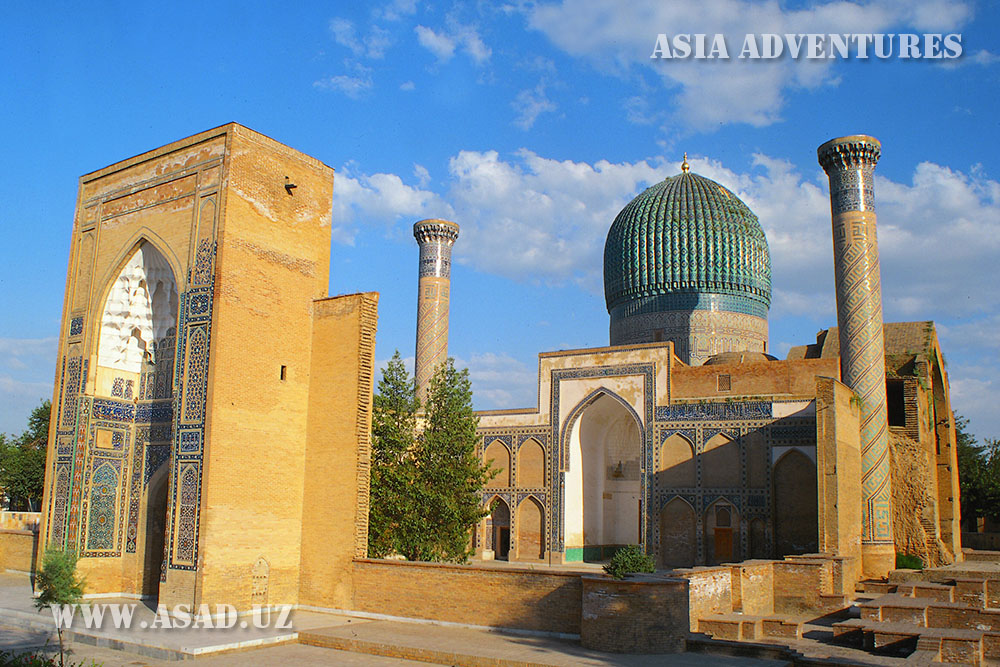 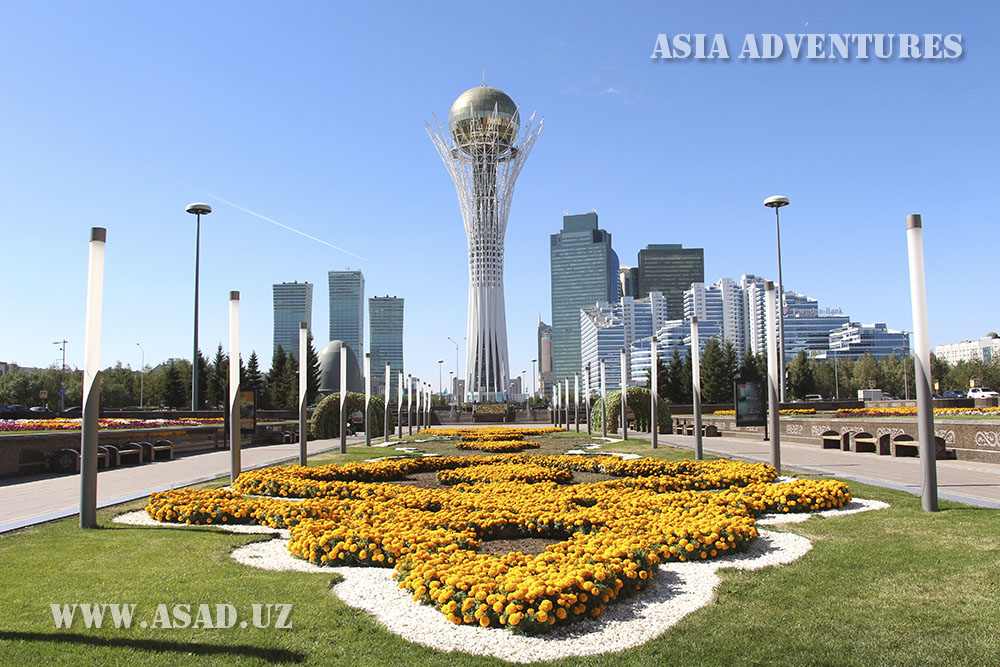 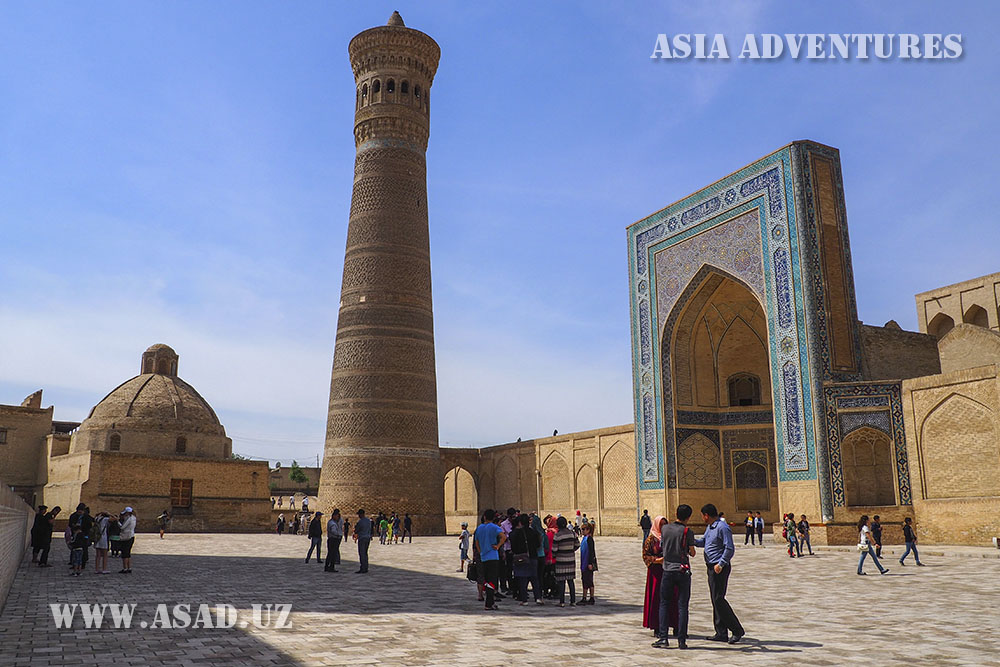 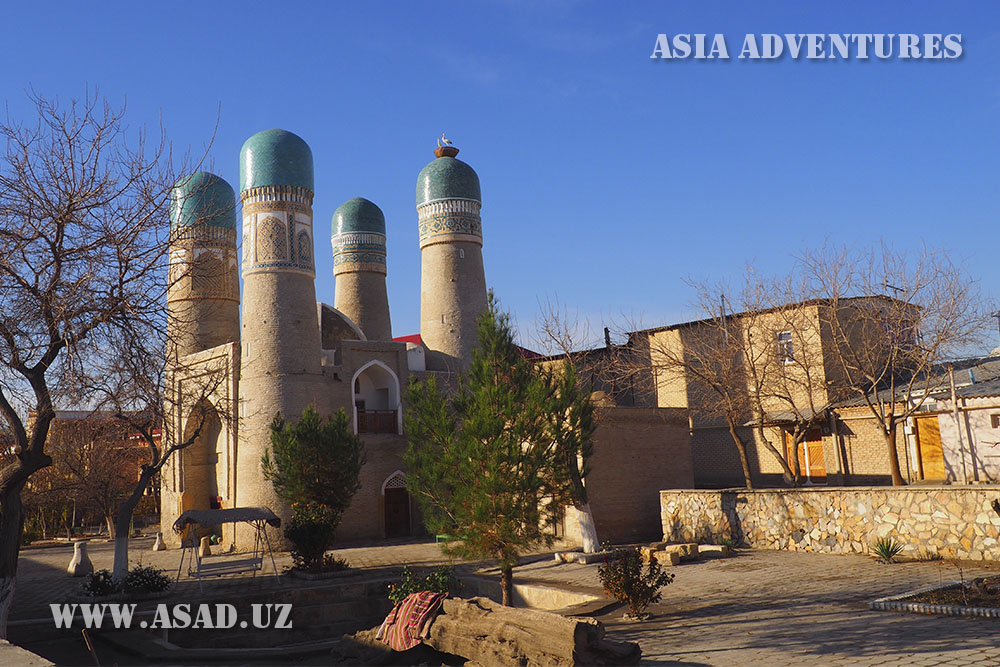 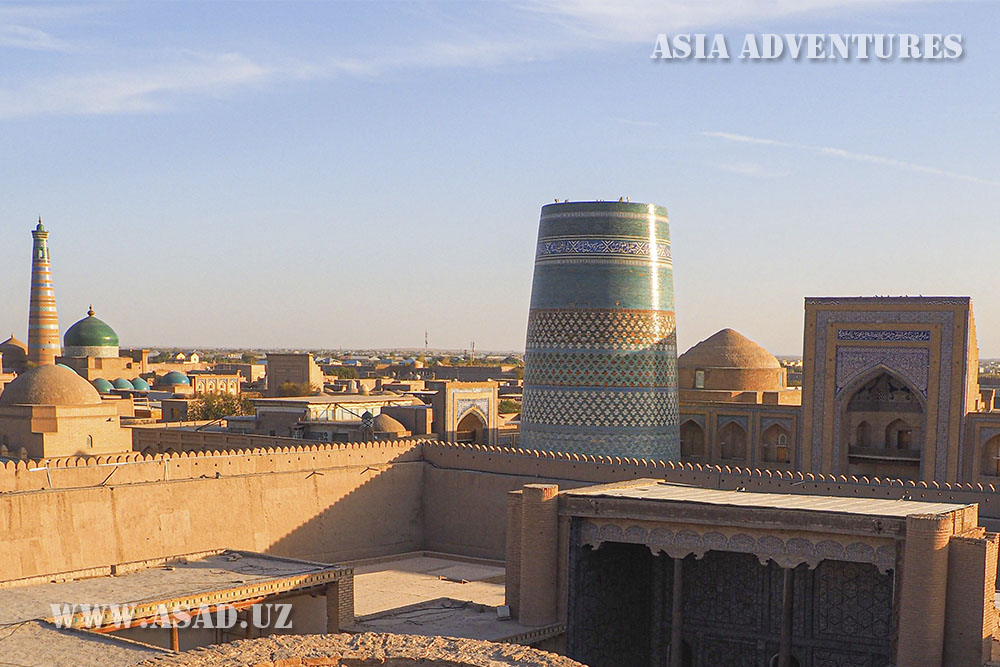 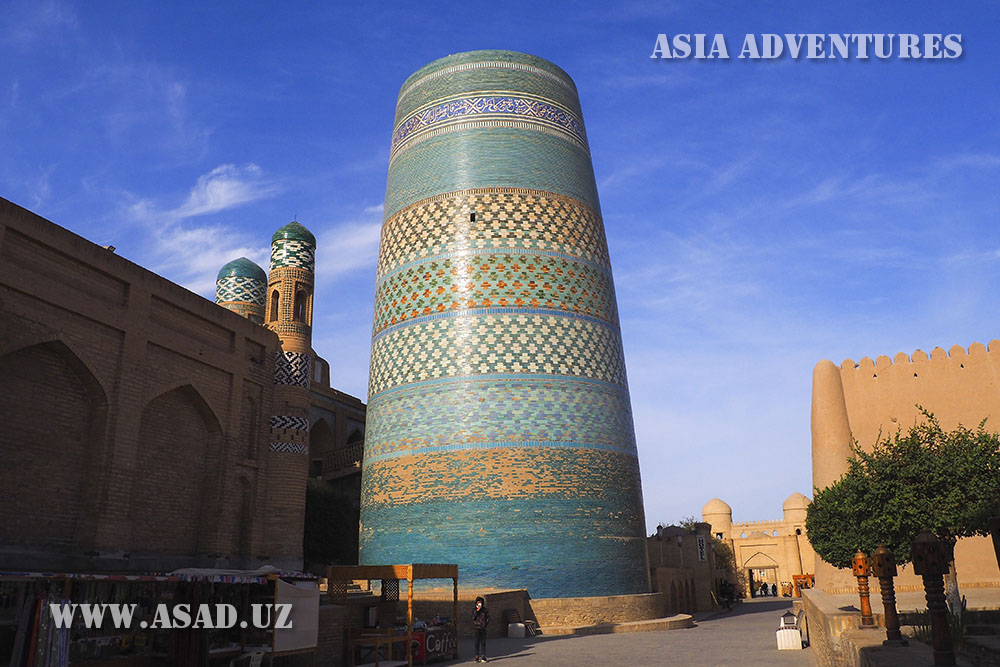 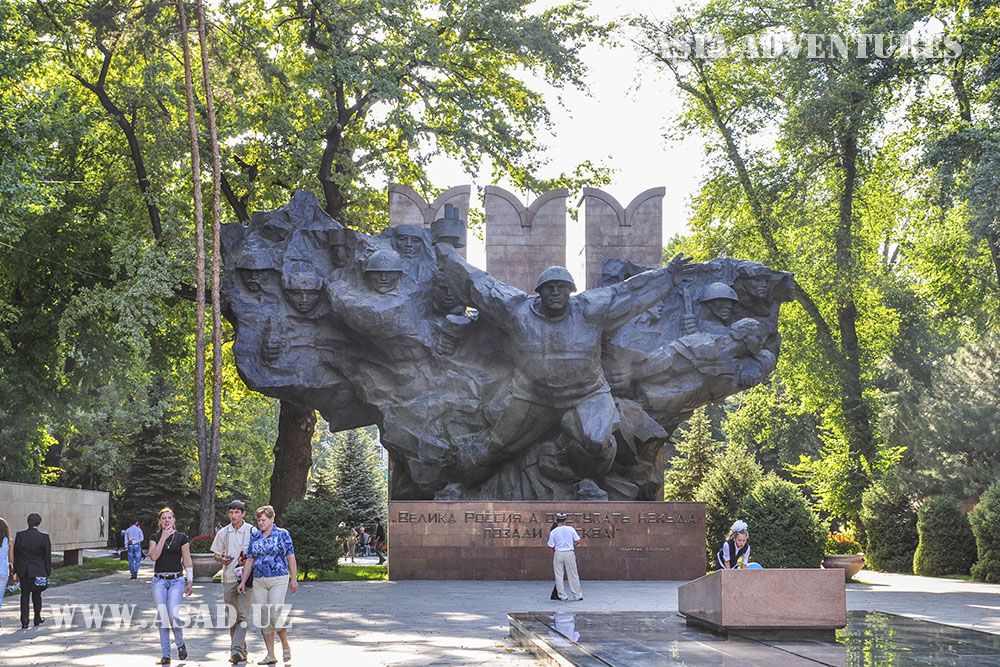 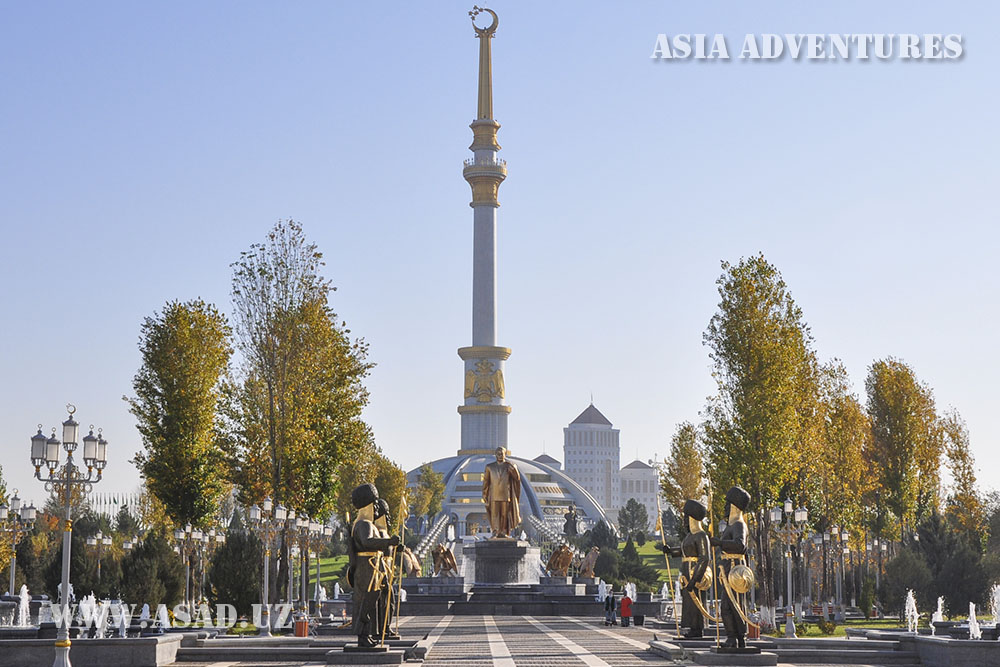 Arrival in Ashgabad at night (02.00 a.m), early check-in. Rest. After lunch  we visit some of the city’s greatest monuments, Independence Park, the Neutrality Arch, the National Museum., Earthquake Victims Memorial
Overnight in hotel.

Continue the excursions: the capital of ancient Parthia, the most powerful state of the region - old Nissa (UNESCO object), the Grand Mosque and the mausoleum of the 1st President of Turkmenistan - Turkmenbashi. After lunch, we move to the north of Turkmenistan through the hot Karakum Desert to the Gates of Hell - a gas crater that has been burning for more than 40 years. Seeing off the sun and barbecue dinner near the fire. Overnight at the yurt camp.
3

Today we will drive to the north of Turkmenistan to the center of the powerful medieval kingdom- Khorezm. Destroyed and plundered by ChingizKhan and Tamerlan in the XII - XIV centuries. During that time Kunya Urgench lost its strength, but some monuments of that era have survived to this day. It is not for nothing that it is included in the UNESCO World Heritage Site. We will see here: the mausoleum of the founder of the Sufi sect "kubra" Najimetdin Kubra (XII-XIII centuries), the mausoleum of the Mongol princess Torebeg-Khanym (Turabekkhanum, XII-XIV centuries BC), minaret Kutlug-Timur (XII-XIV centuries, the highest minaret in Central Asia - its height today is 67 m), Tekesh-Khorezmshah (XIII century).
Overnight at the hotel.

Sightseeing in Khiva: Ichan Kala – under the open sky museum protected by the UNESKO as one of the world heritage masterpiece. Kalta-Minor Minaret (1855 y) – unfcomplete minaret of 26 m height and base D=16 m. It was planned to be the highest minaret in CA. Kunya-Ark (XVII-XIX cc) - the first palace of Khiva. Pahlovan Mahmud mausoleum (XIV-XIX c) decorated with tiles gorgeous mausoleum over the grave of Khiva national hero and poet. Islam Khodja madrassah and minaret (XX c), Juma-mosque (XVII c) - the original Friday mosque with a roof, propped up by 218 wooden carved columns (X-XIX c). Tash-Khauli (1830-1838 y) – palatial and habitable rooms.
Overnight at the hotel.

Today we have a long drive to Bukhara through the Kyzyl-Kum desert. On the way, stop at a viewing platform near the banks of the largest river in Central Asia - Amu-Darya, photo stops in the desert and stop for rest and lunch at a roadside cafe. Accommodation at the hotel and rest.
6

Today we are leaving hospitable Uzbekistan through the Jartepa checkpoint and will visit the 3rd country of Central Asia – mountainous Tajikistan. The first stop is in ancient Penjikent – the largest shopping and cultural center of ancient Sogdiana. Penjikent is called the Asian Pompei, completely burned by the Arabs in the VIII century. We will visit the ancient settlement of Penjikent, the historical museum with Sogdian frescoes (VI-VII centuries) and the local bazaar. After lunch, along the picturesque mountain road, along the canyons of the Zeravshan and Fandarya rivers, we arrive at the legendary Iskanderkul Lake, the pearl of the Fan Mountains – the country of blue lakes and snow peaks reaching a height of 5489m. Locals believe that the lake is named after Alexander the Great. We will take a walk through the picturesque surroundings of the lake, including visiting the most spectacular waterfall in Tajikistan, "Tajik Niagara" (height of 40 meters). We will spend the night in cottages with fantastic views of the lake and high mountains.
9

Today we will cross the Zeravshan ridge through the Anzob tunnel and drive through the valley of the picturesque Varzob to the capital of Tajikistan – Dushanbe. After lunch, we will have a small but interesting tour of the city: Independence Square, the monument of Samani - the founder of the Tajik statehood, Rudaki Avenue with buildings of Stalin’s era, the exposition of the National Museum with an interesting collection of ancient artifacts, including the world's largest 13-meter ceramic figure of Buddha in Nirvana ( VII-VII centuries). Overnight at the hotel.

Today we are going to the north of Tajikistan to ancient Khojent through the picturesque mountains and the Shahristan tunnel with a stop in ancient Istravshan (Kiropol), which the Persian king Cyrus conquered back in the V century BC. In Istravshan, there will be a short tour: Mugh fortress, Kok-gumbaz mosque-madrasah (XVI century), Bobo Tago mausoleum (XVI century), Sari-Mazar cult ensemble (XVI-XIX centuries).

The city is also famous for its craftsmen who make original Tajik knives. You can buy them from blacksmiths at the local bazaar. Upon arrival in Khujand is a lunch. After lunch, a short tour of the ancient city. Khojent was conquered by Alexander the Great in the IV century BC in such heavy battles that he was forced to turn his troops home, calling Khojent as Alexandria Eschata. Excursion to the ancient Panchashbe bazaar, the mausoleum of Sheikh Maslekhitdin (XIV-XIX centuries), the fountain complex of the estate of the Soviet collective farm named after him. Urumkhodzhaeva (Tajik version of the Palace of the Russian tsars in Peterhof). Overnight at the hotel.

Today we have a busy, but interesting day. We will cross the border of Uzbekistan, visit the ancient Kokand (the palace of Khudoyar Khan (1871), with the local historical museum, the mausoleum of Modarikhon (XIX century), as well as the centers of ceramics production in Rishtan and silk in Margilan. Here you can watch their work and buy original products for memory.
Overnight at a hotel in Ferghana.

Today we are passing one of the major cities of Uzbekistan, Andijan, and are aiming for the next border crossing Dustlik and country number 4. We are heading to Osh, it is a legendary city on the Great Silk Road, a city with a 3-thousand-year history. There we will see the Osh bazaar (the largest market in Central Asia), as well as the sacred mountain Throne of the Prophet Suleiman (Solomon), the original history museum in the cave of the mountain. Overnight at the hotel.
13

Today we are flying to the capital of Kyrgyzstan – Bishkek. Upon arrival, we will visit the main sights of the city around the main square, Alatau Square. We will visit the Historical Museum and spend some time shopping for souvenirs or relaxing. After lunch, we move to the magnificent Issyk Kul Lake, surrounded on all sides by snow-capped mountain peaks. The beautiful mountain road will take about 4 hours. Today we will stay in traditional Kyrgyz yurts right on the southern shore of the lake and watch an incredibly beautiful sunset over the dinner.
14

Today is a very interesting day to get acquainted with the amazing nature of Kyrgyzstan. We will drive around Lake Issykkul to Cholponatu with hiking in the mountain gorges of Skazka and Jety Oguz and an excursion in the town of Karakol (Dungan Mosque and Orthodox Church of the 19th century, Museum of the great Russian explorer of Central Asia, Ktitai and Tibet-Przhevalsky) on the eastern shore of Issykkul. Overnight at the hotel.
15

After breakfast, swimming in the refreshing waters of Issykul and visiting the Cholponaty petroglyphs, we return to Bishkek. On the way, a short stop with a tour of the Burana complex (the minaret of the ancient Balasagun and a huge collection of balbals - stone grave idols.) Upon arrival in Bishkek, rest and personal time. Overnight at the hotel.
16

Today we are moving to the 5th and final country of our epic journey - Kazakhstan. Having passed the necessary border formalities, we arrive in the former capital of Kazakhstan, Almaty. After lunch we will visit the most interesting sights of the city: Panfilov's Park, the majestic memorial to those who fell in World War II, the Zenkov Orthodox Cathedral, Republic Square.
Overnight at the hotel
17