Almaty city is situated on the south-east of Kazakhstan, at the foot of Zayliyskiy Alatau. The city’s population numbers nearly 1,5 million people. Almaty was founded in 1854 as a Russian frontline fort in the district settled by nomads and was the capital of Kazakhstan till 1997.

At present the city remains financial, economic and cultural center of Kazakhstan. Almaty is a clean and tidy city with long straight avenues and beautiful parks. The mountains of the Zailiy Alatau rise as a wall along the south border of the city and make a beautiful background. Almaty has always considered a garden-city; even its name is translated from Kazakh like "father of apples". Since Kazakhstan became independent Almaty has began to develop swiftly as business and entertainment center of the republic. There is a big number of city centers, theaters, museums, art galleries, exhibition halls and countless entertainment facilities (cinemas, nightclubs, parks, restaurants, cafes, casinos), also stadiums, race tracks and mountain skating rink Medeo (it is situated on a height of 1700 meters above the sea level).
more...


City’s point of interest is Panfiloff Park, where the orthodox Cathedral Zenkova is situated. This cathedral is one of few pre-revolutionary buildings remained after earthquake in 1911, due to it was built from wood without any nail. In the Central State Museum is represented an exposition which represents history of Kazakhstan and the main archeological value of the state – "Gold Man". It is a soldier costume of 4 BC, founded in the Issikskiy tumulus.
The Issikskiy tumulus is known as one of the biggest archeological finds of skif-saksian period. The find is dated by 4 BC. A young man buried there was a member of a ruling house The Great Kushan. "The Gold Soldier" was wearing a hauberk ornate by golden plaques, a belt with weapon from pure gold, oh the head – arrow-shaped gear. The costume consists from4 thousands of golden decorations, made in famous "animal style" typical for saksian craftspeople.

Outskirts of Almaty are picturesque. The city’s peak Kok-Tobe mountain (wich is translated as The Blue Mountain) is situated at a height of 1130m, where it is possible to get by the rope-way. From this peak an amazing panorama of mountains and the city comes to light. Especially beautiful is there in the night, when the city is illuminated by colorful lights.

Two big rivers flow across the city – The Big and The Small Almatinka, which stream dawn from the mountains and provide fresh water to the city, filling the water stores and fountains with coolness and freshness.

In the ravine of the Small Almatinka are situated several spas and health resorts. Not far from Almaty, on a height of 2230m. Is situated a skiing place Chimbulak. A 1500 m. long rope-way operates there. It rises to a height of more then 3000 m, where a skiing descent begins from. From Chimbulak the road is going to the snowy peaks, which are popular among mountain-climbers.

In the ravine of the Big Almatinka at a height of 2511 m. above the sea level, 28,5 km to the south from Almaty, is situated the Big Almaty Lake. It is situated in the cavity like a sparkling mirror, surrounded by the mountain peaks on all sides. Three basic peaks rise over the lake: the Soviet Peak (4 317m.), the Lake Peak (4 110m.) and the Tourist Peak (3 954m.). It is possible to see them from the north side of the dam. To the west from a tourist is situated the ridge of the Big Almaty peak (a cairn of 3 681 m. high), which is observed well from the center of the city. Supplied by glacial water the lake represents a cup with the length of 1.6 km., width of about 1 km. and depth of 40 m. Depend on the season the lake’s color is changing from faintly-green to turquoise-blue. In the valley above the lake is situated a village with the spectacular cupolas of the Tian-Shan astronomical observatory (2 km. from the lake, at a height of 2 700m.). And higher (at a height of 3 300m), near the pass Jasilkezen, is Komostation, where it is possible to spend the night, observing stars.

90 km far from Almaty is situated a beautiful place - The Turgen ravine. It is rich in hot wells, waterfalls, coniferous and mixed forests, alpine and subalpine meadows, lakes and springs, herbs and berries. It goes deep to 44 km till enormous table Assi. The Turgen ravine is famous by waterfalls, there are about seven. The waterfall Medvejiy attracts by its 30 meters height among pendent rocks and green firs. And the waterfall Bozgul is well known by strong water flow made a tunnel in the rock. The rocks have traces of the preglacial period’s plants. The ravine is known by Chin-Turgen fir-groves, spreading on the ground and making the complete firry carpet. The most popular place in the ravine is the Botan-eger station. Here, by the junction of three rivers, the Turgen ravine reaches the biggest depth – 920m.. There is an observatory on the table. Along the Assi river are ancient tumuluses and rock paintings. There are a lot of ancient saksian and usunian graves in the ravine. Also there is a trout farm in the Turgen ravine, where it is possible to fish and cook trout for dinner.

Only 60 km far from Almaty, near to small town Issik, at a height of 1800m. above the sea level, lies one of the most scenic lakes of the Zailiy Alatau. In 1963 from the glacier zone in the Upper Issik river came out a big mudflow. The enormous waves destroyed the natural dam and as effect, the lake was washed out. At present it is partly restored, but the beautiful scenery of the surrounding mountains cause joy to tourists. 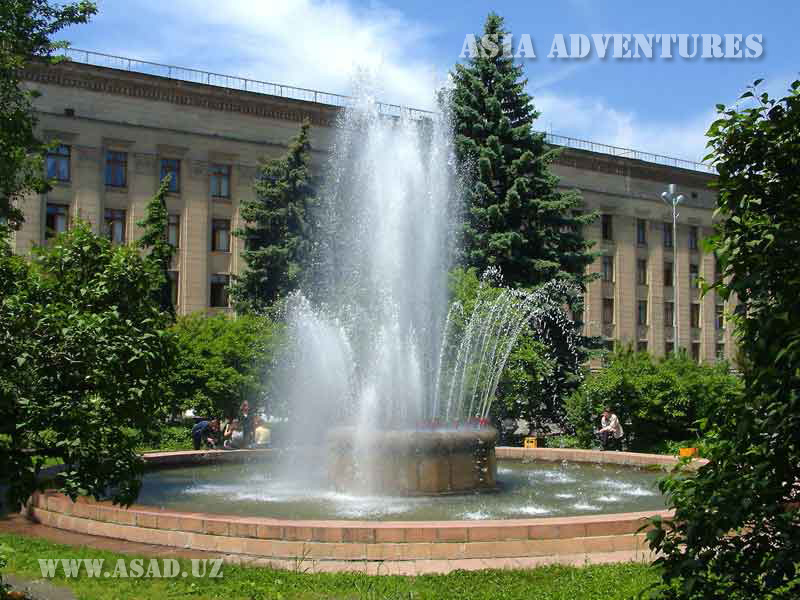