A Trekking tour in Terskei Ala Too mountain range is a wonderful combination of landscapes and romantics of adventures.

It is impressions and emotions that one remembers forever.
Overnights in tents under the starlit sky, campfire after a long day, amazing beauty of the hidder coners and unusual nature views… it is worth coming to our mountainous land – Land of Kyrgyzstan! 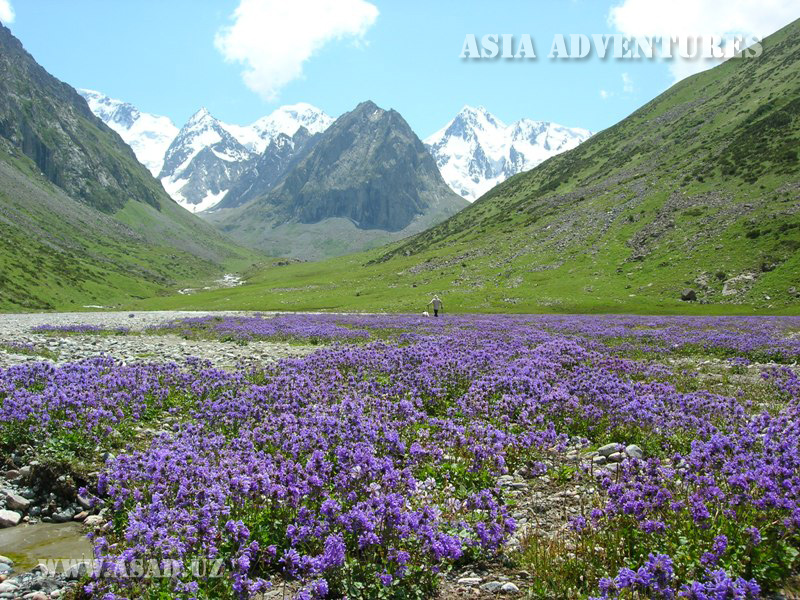 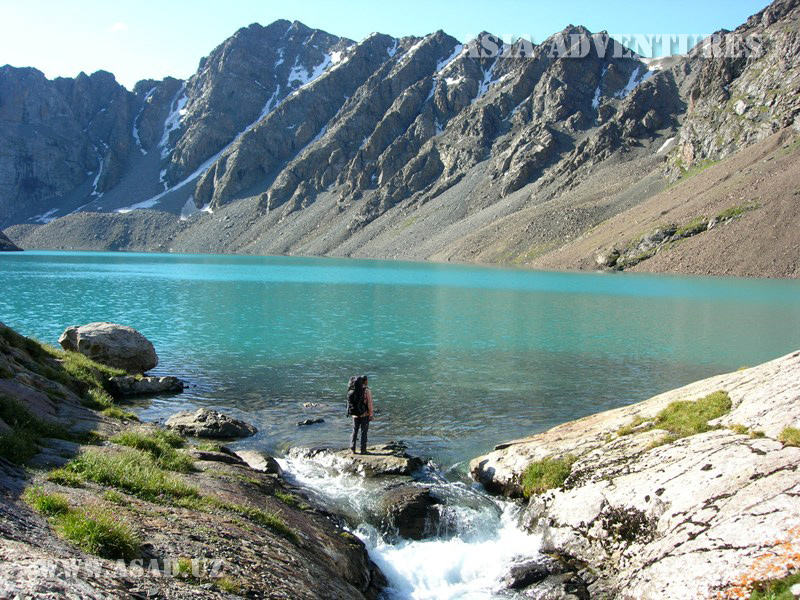 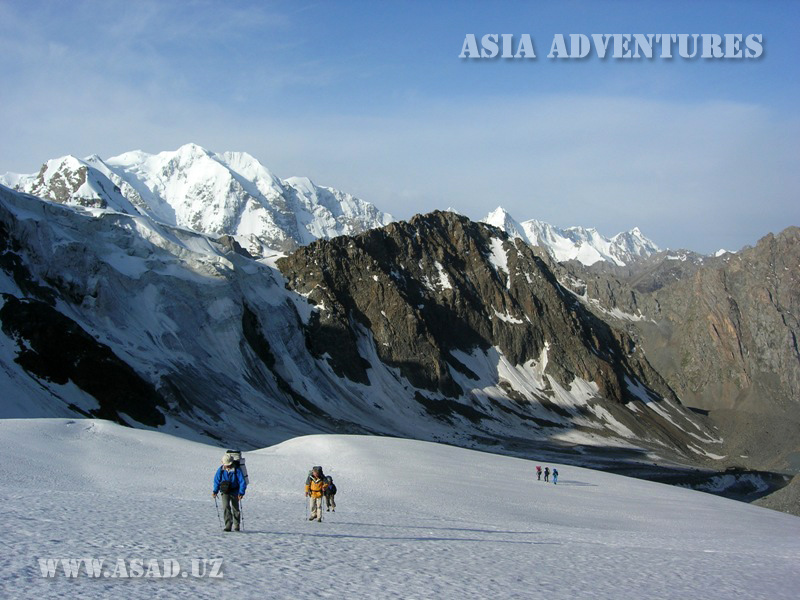 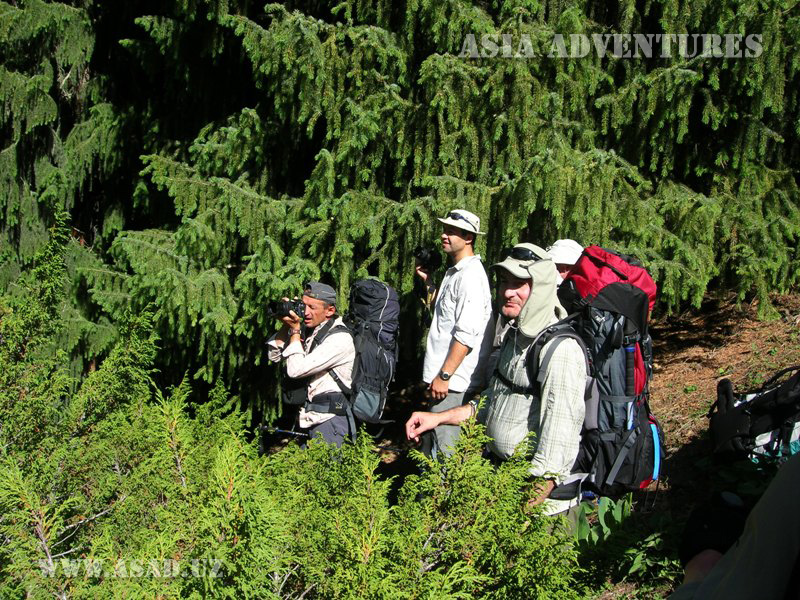 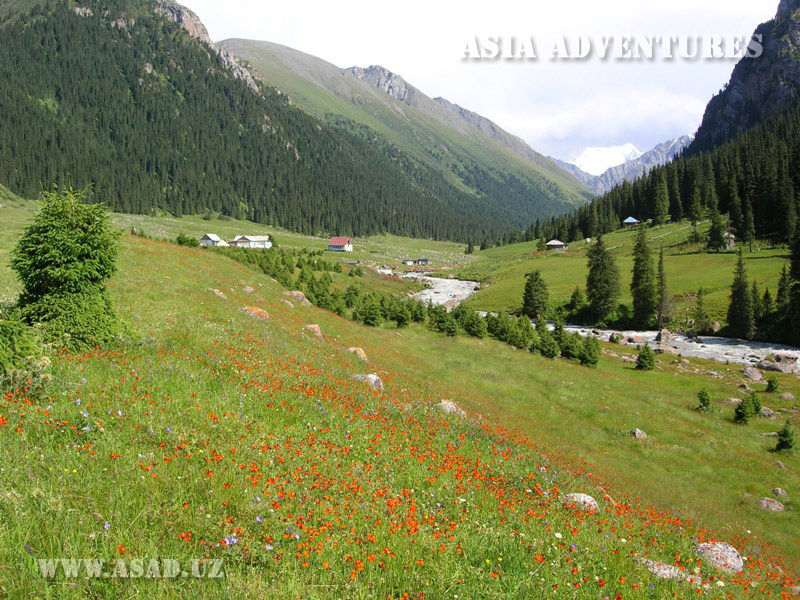 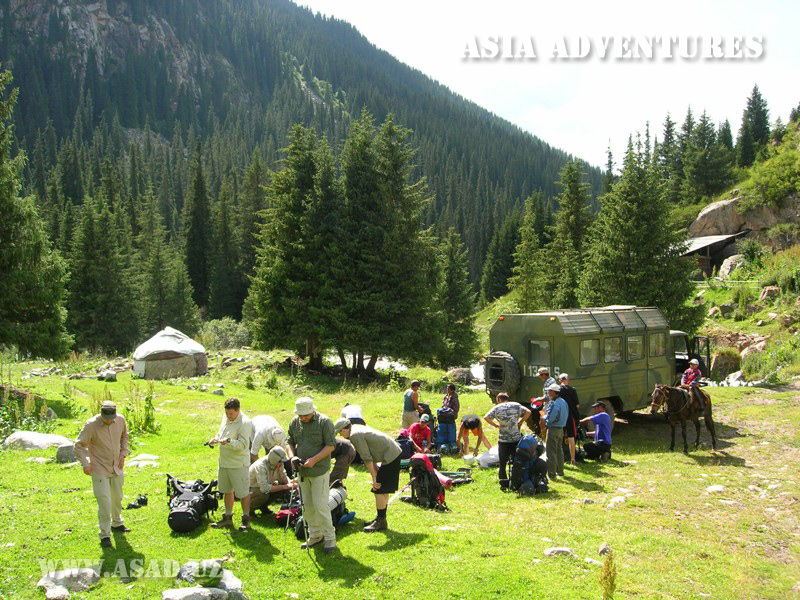 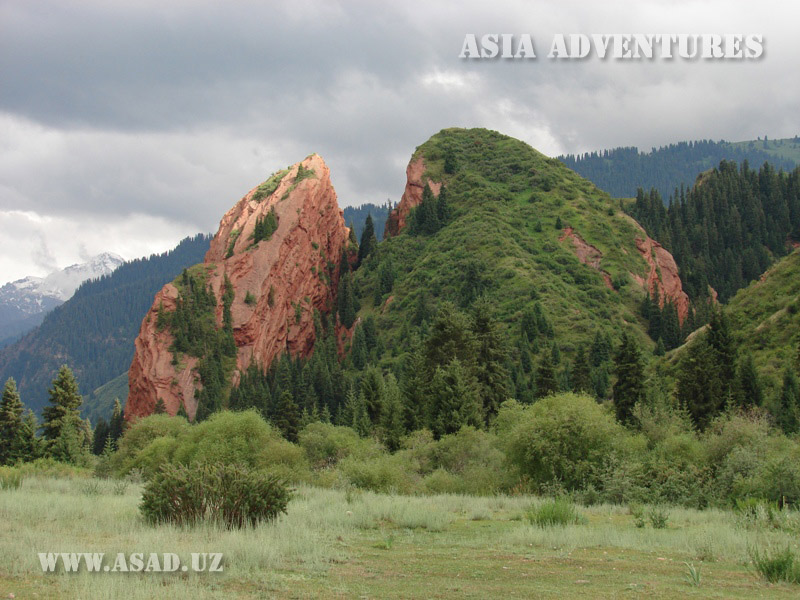 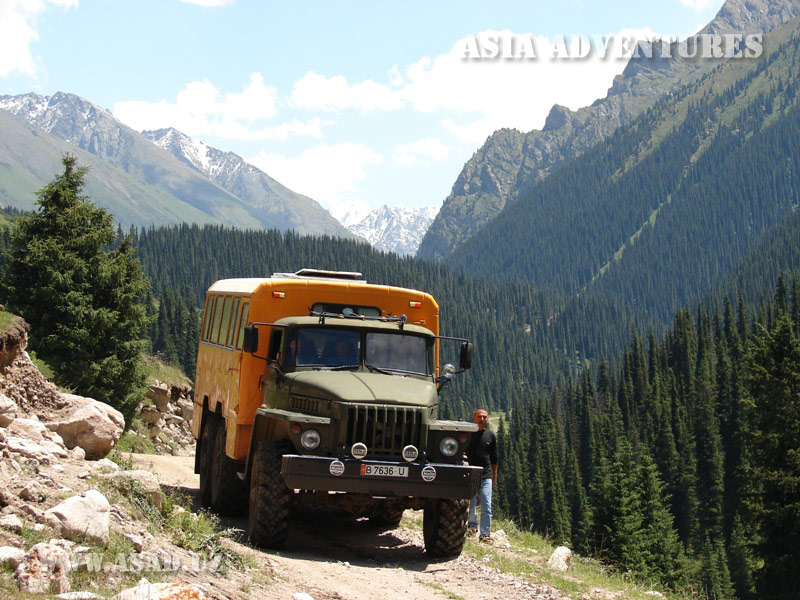 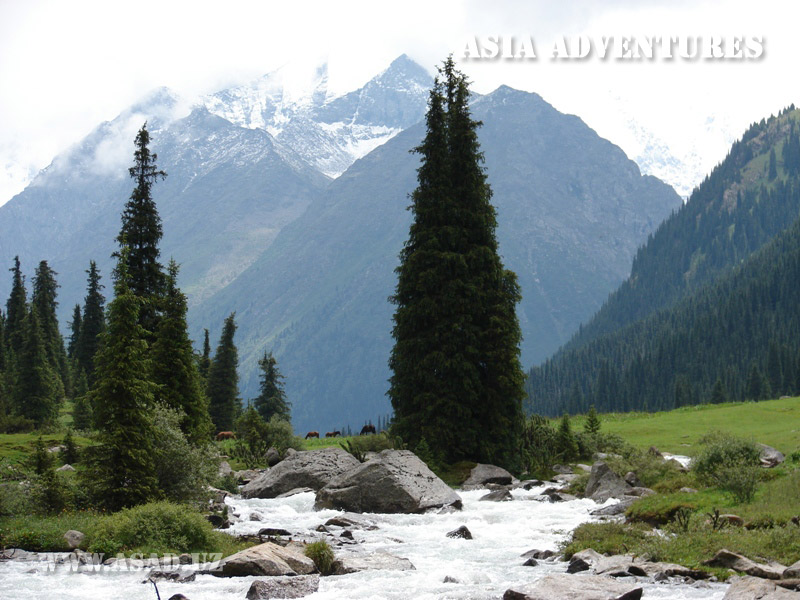 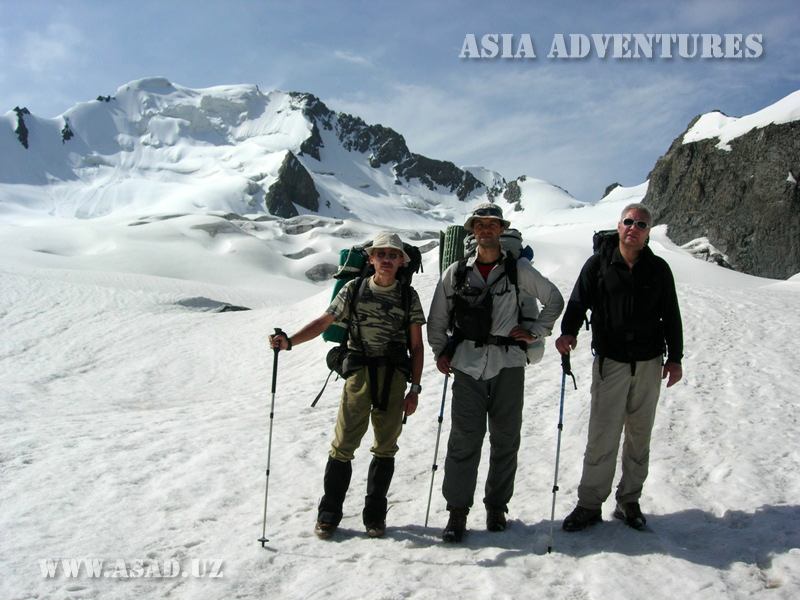 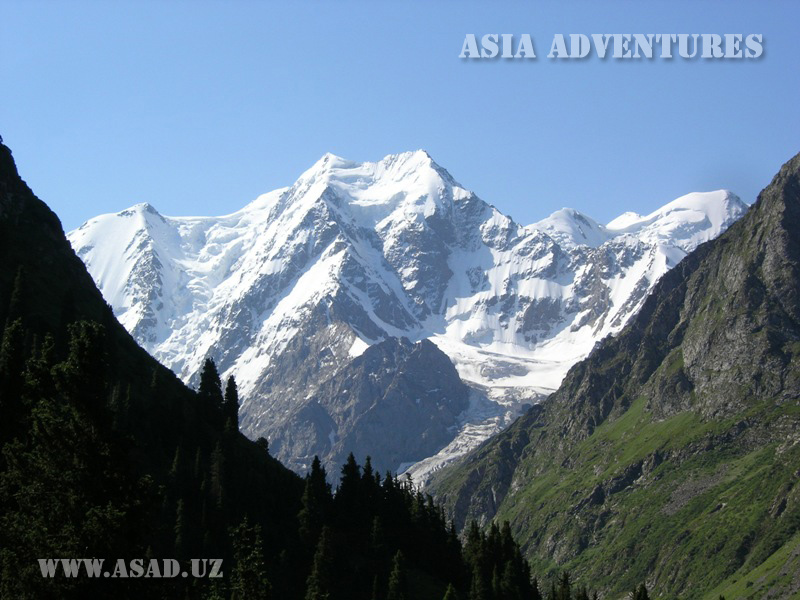 Airport – Bishkek city. (30 km, 1 hrs, (B,L,D)) Upon arrival to the international airport “Manas” you will be met by “Ak Sai Travel” guide. Short drive to Bishkek and accommodation in a hotel. Afternoon city tour. The capital and industrial centre of Kyrgyzstan, Bishkek is a city of wide avenues, handsome buildings and Soviet heritage. The gesturing statue of Lenin can still be seen in the city’s vast central square, yet it is the permanently snowcapped Kyrgyz Alatau mountain range which towers over Bishkek providing a quite stunning backdrop. We visit Manas Monument, the main national hero of the Kyrgyz people. Then excursion to the State History Museum and walking tour around main Ala Too Square to watch ceremony of changing of the Guard of Honor, Kurmanzhan Datka Monument, main governmental buildings, and finish at the Old Square with Parliament House. Transfer to the Victory Square to finish the city tour by short excursion there. Dinner in a local restaurant. Optionally: During dinner we take the unique opportunity to listen to the Manaschi (a singer performing the national Kyrgyz epos, Manas) and see Kyrgyz folklore show. The musicians in traditional Kyrgyz costumes present you a wide range of national musical instruments – starting from Komuz (a three-stringed wooden musical instrument) to Chopo Choi (wind instrument made of mountain reed). You hear the fascinating singing of young Kyrgyz ladies and men and learn more about the traditional music and poetry of Kyrgyz. Overnight in a hotel.
2

Bishkek city – Karakol town. (430 km,7-8 h, +900 m, (B,L,D)) After breakfast we drive to Issyk Kul Lake that is considered to be the “pearl” of Tien Shan and one of the most beautiful lakes in the country. Our way goes via ruins of Burana Tower (old minaret) near Tokmok city. That minaret was constructed in Balasagun town, one of the capitals of Karakhanid State existed in 11-12 centuries AD. Explore ruins of that important trading point at the Great Silk Road and visit a little local museum telling about that civilization. Also watch a collection of Balbals, Turkic ancient tombs. Optionally: On the area around the tower it is possible to organize horse riding games. Along with hunting dogs and birds, horses have always played an important role in the life of Kyrgyz people. They were used in every day life as true assistants in household and as thoroughbred racers. There are festivals of Horse Games (Ulak Tartysh, Kyz Kuumai, Tyiyn Enmei, etc) held throughout the year. Lunch en route. In the late afternoon three hours drive to Issyk Kul Lake, the second largest alpine lake in the world after Lake Titicaca in South America. Measuring 182 km long by 58 km wide, the lake appeared as a result of volcanic activity. It is heated from below by thermal activity and never freezes even in the depths of winter. In the summer the water temperature reaches 25-28 degrees centigrade (warmer than the air) and you can swim in the lake enclosed on all sides by the snowy peaks of the Tien Shan Mountains. Extremely deep and nicely warm over the centuries the lake has been something of an oasis in this inhospitable mountain environment. With diverse flora and fauna Issyk-Kul Lake and the surrounding environments are rightly considered to be one of Central Asia most remarkable locations. En route we also visit so called “Stone garden” or Cholpon Ata Petroglyphs site, the temple in the open air of Scythians and Hung suns civilizations dated back 9-8 centuries BC till 3-4 centuries AD. The area of those stone drawing lies at the foot of Kungei Alatau Ridge with a beautiful view of the whole lake. Continue driving to Karakol town. Upon arrival accommodation in a guest house. Dinner in a local cafe/local family. Overnight in a guest house
3

Karakol city tour. Karakol town – Djety Oguz gorge. (45 km, 4-5 h, +900m, (B,L,D)) Morning short sightseeing tour in the town – Dungan Mosque, Russian Orthodox Cathedral, Prjevalskii Memorial Complex. Lunch in a local cafe. Transfer to Djety Oguz gorge located in the Northern slopes of Terskei Ala Too some 35km west from Karakol town. The length of the valley is 40 km. There is a chance to see the well-known redsand rock formations – “The Broken Heart” and “Seven Bulls”. The slopes in the gorge are covered with the world-famous Tien Shan blue spruce for about 25km along the fast mountain river. The road goes along the river (five log bridges to cross). This is the most narrow part of the way. Later it opens into so called “Flower Meadow” (Kok Jaiyk). The upper part of Djety Oguz valley is blocked by a long Djety Oguz wall with a fabulous Oguz Bashi peak (5165m) in the central part of it. Dinner and overnight in “Djety Oguz” tent camp at 2600m.
4

Radial hike to Oguz Bashi peak. Trek to Telety pass. (16 km, 6-8 hrs., +450 m, (B,L,D)) Radial hike rto Oguz Bashi peak. The path along the river bank in a very narrow wooded gorge Bay Tor leads us to the alpine meadows. Here, on a flower carpet, in the mountains the air is sweet and clear, the views are amazing, one forgets all his troubles and gets closer to the nature. Hike back to the camp. Lunch in the camp. Trek to the tent camp at the foot of Telety pass. It is not a difficult trek, about 6-7 km along West Telety river. Dinner and overnight in “Telety” tent camp at 3050 m.
5

Trek over Telety pass (3800m) down to Karakol gorge (2500m) (18 km, 6-8 hrs., +750 m/-1300 m, (B,L,D)) Going up the pass is not very difficult, mainly the route goes along a narrow path with a slight ascend. There are only two rather steep slopes, which require some efforts. From the top of the pass at 3800m asl we enjoy the views of the surroundings. Descent is rather simple, along a wide slope covered with talus, across alpine meadows with various herbs and flowers, along East Telety river. Later we hike through the wood along a trail covered with roots. Dinner and overnight in “Karakol” tent camp at 2500m.
6

Radial hike to the foot of Karakol peak (5216m) (16 km. 6-8 hrs, +700 m/-700 m, (B,L,D)) Radial hike up along Uyun Tor river to the foot of Karakol peak. We have a chance to see Tien Shan blue spruce forest, underwood (dog rose, honeysuckle, black barberries, mountain ash, black current, etc. There are mushrooms in the forest. Starting from May there are flowers blooming on the meadows – snowdrops, tulips, primerose, white anemone, alpine Aster, edelweiss (really big ones), etc. We reach the point with a view at the highest peak of Terskei Ala Too – Karakol peak. Possibility to use sauna. Dinner and overnight in “Karakol” tent camp at 2500m.
7

Trek along the gorge to “Sirota” hut and to Ala Kol Lake (3532m) (9 km, 6-8 hrs, +1100 m, (B,L,D)) Descent along the gorge about 3 km, later we cross the river over a bridge and the trail leads us into a forest. Rather long ascent finishes at a steep slope covered with grass, the trail turns into a serpentine, passes by a river overflow, and arrive to an unusual place which is called “Sirota” mountain hut. It is a log hut. There is a table, benches, fireplace inside. We can find a number of sculptures of animals and idols carved in wood around the hut. It looks like a fairy tale place. It is a nice place to sit down, rest, have a snack. Later the trail goes up higher, leaving the forest behind we hike along the river and reach a beautiful waterfall, flowing down from Ala Kol Lake. Dinner and overnight in “Ala Kol” tent camp at 3600m.
8

Trek over Ala Kol pass (3800m) passing Ala Kol Lake and descend to Arashan gorge (2600m) (18 km, 6-8 hrs, +200 m/-1200 m, (B,L,D)) Moraine Lake of Ala Kol stretches from east to west for 2.8km, its width is 500m, and depth 70m. Ala Kol means Colorful Lake in Kyrgyz language. Depending on the light the water might change its color. It can be emerald green, turquoise with white clouds reflected, light green or dark grey, or even black. During the ascent we enjoy wonderful views of the lake. Arriving closer to the lake we see the main range of Terskei Ala Too with a number of peaks – Aksu, Djigit, Karakol, Oguz Bashi, etc. From the lake edge it will take us another hour and half to the pass. Descent from the pass along a talus slope, and later across a wide valley of Keldike with picturesque landscapes, herds of cattle and flocks of sheep grazing. Later the trail brings us into a forest again and descends into Arashan valley. Upon arrival to the tent camp you may use an opportunity to relax in the hot springs. There are thermal baths (up to +50C) in the valley. Possibility to take thermal baths. Dinner and overnight in “Altyn Arashan” tent camp at 2600m.
9

Altyn Arashan gorge – Cholpon Ata town (155 km, 4-5 hrs, -1000 m, (B,L,D)) There is a resort Altyn Arashan founded 1963, famous for its hot mineral springs. The resort represents several wooden huts located on a big treeless meadow on the right bank of Arashan river. The Northern slopes of the left river bank are covered with fir trees. It gives an unforgettable picture – dark green trees with snowcapped mountains “Aksu wall” (5022m) in the background. Transfer to Cholpon Ata town. Possibly to descent over green fields with blooming flowers and crystal mountain springs. The final 5 km of the gorge are very narrow not more than 30 m with high rock walls. At the entrance to the gorge we pass by a village – Ak Suu (the name comes from the hot springs). Here you will take place inside the car. Accommodation in a hotel on the north shore of Issyk Kul Lake. Dinner and overnight in a hotel.
10

The Taste of Tien-Shan