Fedchenko glacier is the largest in the former USSR and one of the biggest in the world. It is 77 km long and from 1700 to 3100m wide. It springs from the foot of the Revolucii Peak at north mountainside of the Yazgulemskiy mountain range and runs along east mountainside of the Science Academy mountain range. Ice in the middle of the glacier is approximately 1000m thick, the glacier’s rate of movement is about 66,8 centimeters/24hours, total glaciation’s area is 992sq.km. The glacier is largest middle-latitude valley-type glacier in the world. The glacier’s upper end is at an altitude of 6280m, lower -2900m, snow line is 4650m high.
more...


Seldara river springs from the glacier.

Discovery of the glacier was made at the close of the 19th century. In 1871 the first Russian expedition leaded by a well-known naturalist and explorer of Turkestan A.P. Fedchenko came to the Pamir. Interrogating the Zaaliyskiy ridge and discovering its highest peak (the Lenin Peak, 7134m) the expedition made a general scheme of the Pamir mountain range. At the same time an enormous glacier bearing today the name of Fedchenko was discovered by the expedition. In the glacier’s basin are situated the highest peaks of the Pamir, which attract national and foreign alpinists by their height and inaccessibility. In the upper glacier is situated the Revolution peak (6974m). Almost from every point of the glacier it is possible to observe the highest alp of the former USSR and Pamir – the Communism Peak (7495m). Near to it are the Russia Peak (6852m) and the Garmo Peak (6595m).

The highest (4200m) hydro meteorological observatory in the world is located at the glacier. 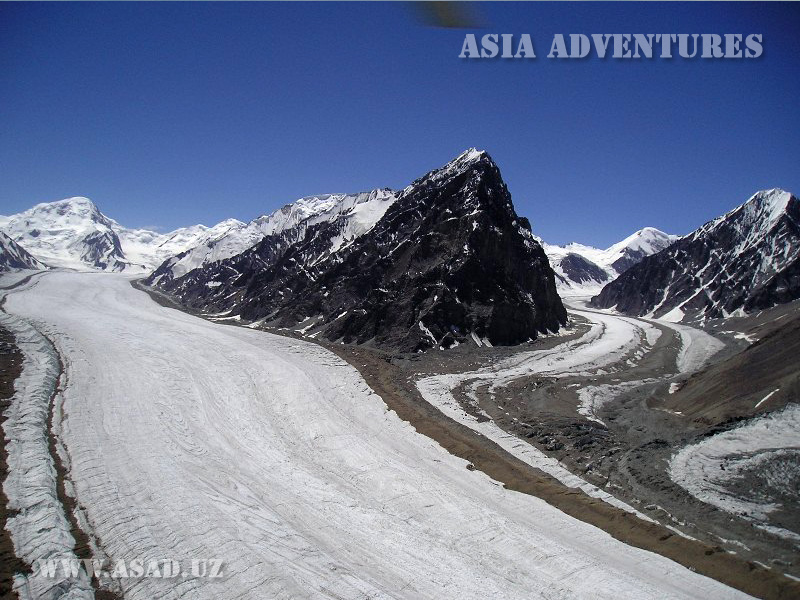