This is mountain summit in south-western Pamir, in western part of Shakhdaryinskiy Range, Tajikistan. It’s a highest point of Ishkashim Range. There are some glaciers on the slopes. There are steep rocky walls from the north side. The first ascension to Mayakovskiy Peak was accomplished in 1947 by Soviet climbers under the direction of Budanov V.A.
In 1946 the treiangulation of the region was carried out by military topographers. The enough sensation results after all were taken after data processing. There were just approximate estimation of summits altitudes, and it was supposed that the altitudes of Patkhor and Karl Marks Peaks were a little bit more than 7000 m. The expedition established the exact values of the altitudes of those summits, and besides it was discovered near Mayakovskiy Peak the second 6-thouseder (Academician Berg peak) in that center, only 4 meters lower it.
In 1947 in 16 years after the discovery of Mayakovskiy Peak for the first time the participants of Moscow climbing expedition under the direction of Zatulovskiy D.M. accomplished the ascension to its summit. The North scouting group of that expedition - Tikhonravov V.A., Ivanov V.B. and Zvezdkin M.N. – has reiterated one of the route of 1931, trying to find the way to the peak from the side of sources of Lyadjuar River. As Zatulovskiy advised: «according to Tikhonravov’s estimation, the ascension to Mayakovskiy Peak from the north is possible along the short ridge, outgoing to the north from western summit of the peak. But it should be very difficult way here». The efforts of the group to find a pass to the south from the side of Lyadjuar-Dary are found unsuccessfully: «the ridge of the range is dropped off by steep 200-metered wall to the south...», and the group had to find the pass in other place.
The supposing of scout was confirmed in practice by the expedition of Zatulovskiy that there should be a big glacier from the south part of the peak. The glacier was passed, mapped and photographed by the participants of the expedition. The ascension to the summit of the peak was accomplished exactly from this side.

The aim of the expedition in 1947 was the investigation of the region of Mayakovskiy Peak and the ascension to the environing summits. The director was Zatulovskiy D.M. It was the first expedition of sporting society of trade unions, the membership of it mainly consisted of scientists and teachers of institutes, there were two honoured masters of sports among them: Kazakova E.A. and Sasorov V.P., several masters of sports and rated sportsmen. The caravan of the expedition started from Darshay settlement. Ascending along the long valley of Daraidarshay River the expedition set up the base camp on the bank of Ambarku River not far from Tung summer cabin. The camp was located in such way that it can be started the routes to any 3 cirques, to any summits of the region. The first scouting ascensions were accomplished to Trezubets (Trident) 5430 m. and Central 5440 m Peaks, the inspection of possible ways of ascensions to Mayakovskiy Peak was made from them. During the expedition the material for composing of the region map was gathered, and also the ascensions to Mayakovskiy, Academician Berg, Imast, Ambarku, Snowy, Kalgasporny and Perevalny Peaks were accomplished. 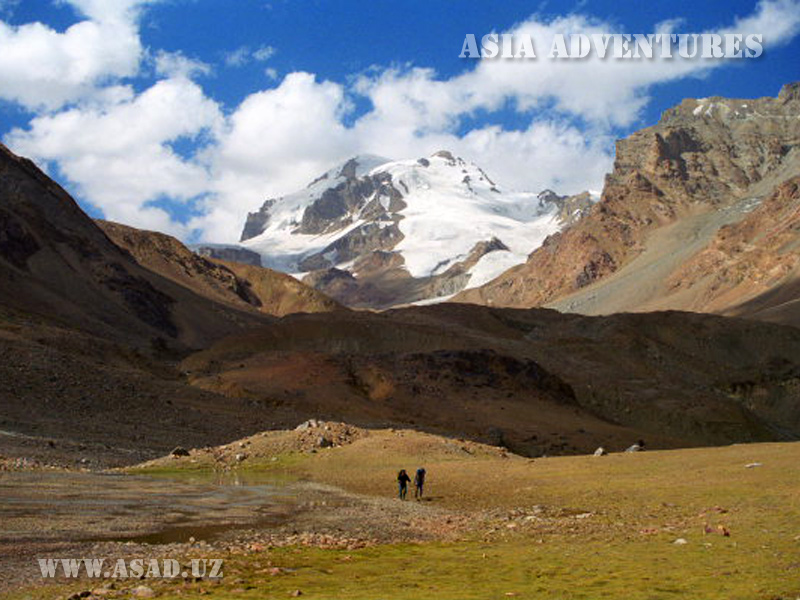