Ashkhabad (Ashgabat) is the capital and the largest city of Turkmenistan, which name can be transferred as the "city of love". It is located in the south-west part of the country, in the extensive oasis, which lies at the foothills of Kopet-Dagh, on the very edge of hot desert. The city was formed, for the most part, in the beginning of XX century, around the Russian fortress, built in 1881 y. on the cross-road of caravan ways. In 1885 y. the branch of Caspian railroad was laid through the city, which gave the powerful impact to its development.
more...

During the sorrowful day on 6 October 1948, at 1 hour 17 minutes midnight, Ashkhabad was swapped from the earth by the terrible earthquake, which took away lives of, at least, 110 thousand inhabitants. During the five years the city ruins were the closed zone. Along the 20 years entire Soviet Union restored it practically from "zero level". But old buildings were destroyed totally. Even the trees were swept by the destructive force of element; therefore everything that now it is possible to see in the capital of Turkmenistan relates to the "epoch of developed socialism" and to the later times, when the country found independence and present construction boom began.

The east is east; therefore no one is astonished that the basic center of attraction for the tourists is the enormous Sunday market, which is famous for its variety of goods and bright Turkmen traditions. Lengthened on several kilometers along the desert suburbs of city, market attracts attention with its possibility to purchase the traditional Turkmen carpets, which are brought together here for sale from the entire country. "Russian" (covered) and "Tekin" markets are also the popular places of trade.

The capital museum of carpet is considered as the largest in the world. Hundreds of best models of carpets of all times, the oldest of which relates to XVII c. are assembled here. The largest carpet in the world, whose area is almost 400 square meters, and weight is more than ton also is here. The exposure of National Museum of History and Ethnography with luxurious collection of ancient exhibits, assembled from the entire territory of Turkmenistan, including excavation samples of old Nissa is also interesting. The total area of museum is about 15 thousand square meters and exposure are is more than 5 thousand square meters. The exhibits, discovered in Altyn-Depe, Gonur-Depe, Togolok, Nussa occupy the special position of exposure.
The exposure of Museum of Fine Arts has unique collection of ancient mosaic panels, found at the excavations of famous Gonur-Depe monument (III c. B.C.). Once they decorated the interior of Tsar’s tomb. Panels consist of thousands of fine carved details. Turkmen restorers thoroughly restored the unique mosaic, which depicts draconic and devouring animals. According to the scientists’ opinion, this is the earliest topical mosaic in the world of a similar complexity and realism of images. Until now the ancient mosaics, created in Mesopotamia, Asia Minor and Egypt, were known to science, but they were ornamental, with geometric patterns.
The visit to exposition of the Union of Artists of Turkmenistan also causes an interest: "Mohammed", "Ensi", "Akbulak" and "Juma Jumadurdy" private galleries.

Numerous interesting places are also situated around the capital. Scientists consider that the oases of foothills were the place of forming not only the civilization of antiquity, and that the desert sands hide unique monuments of history and culture. Archaeological section of Anau-Depe (IV-III thousand year B.C.), Anau fortress (III c. B.C. - III c. A.D.) and also remains of similar medieval city with the mosque lie in 12 kilometers south-east of Ashkhabad.
The remains of ancient capital of Parthian state known as Nissa (Konenusay, III c. B.C. - III c. A.D.) - the unique monument of history lie in 18 km west to Ashkhabad.
Enormous quantity of unique objects of the past were discovered in the small territory of ancient city, including 2700 tables with inscriptions made of clay, the ruins of antique Mitridatkert fortress with area of approximately 14 hectares, the remains of urban blocks, temples, palaces, the archive of economic documents, works of skill, etc.
The hunting residence of Persian royal family Firuza situated in the green gorge in 30 km south-west to Ashkhabad. It is the popular mountain resort, being the real protection from high temperature adjacent plains. The mountain pedestrian route "Serdaor-Ely" passes through the most picturesque places of Kopet-Dagh. The famous Bakharden cave with enormous underground Kol-Ata lake ("father of lakes") with approximately 3 thousand square meters area is located here. Lake water has a temperature of approximately +36? C all the year round and it is saturated by enormous quantity of salts, beginning from hydrogen sulfide and concluding with boron and others. Now Kol-Ata lake has the status of national preserve since the CIS countries largest colony of bats is located in the cave, besides the lake. 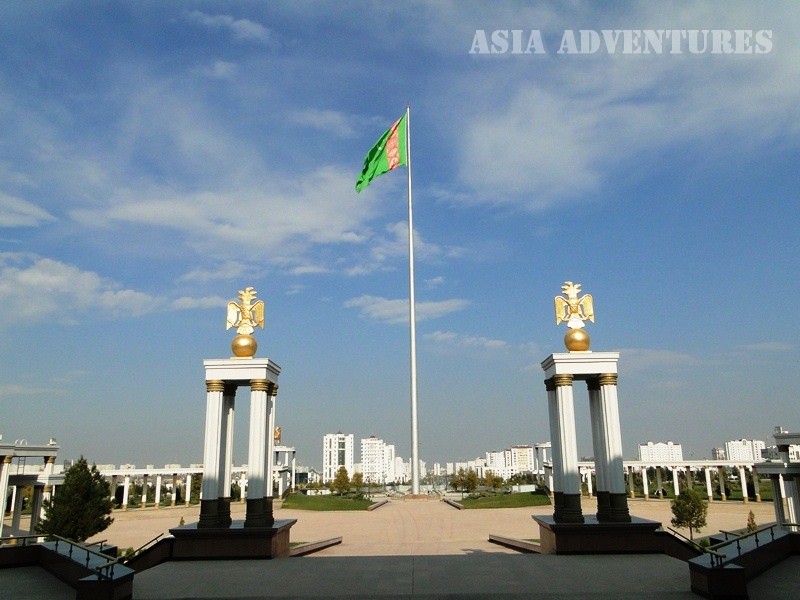 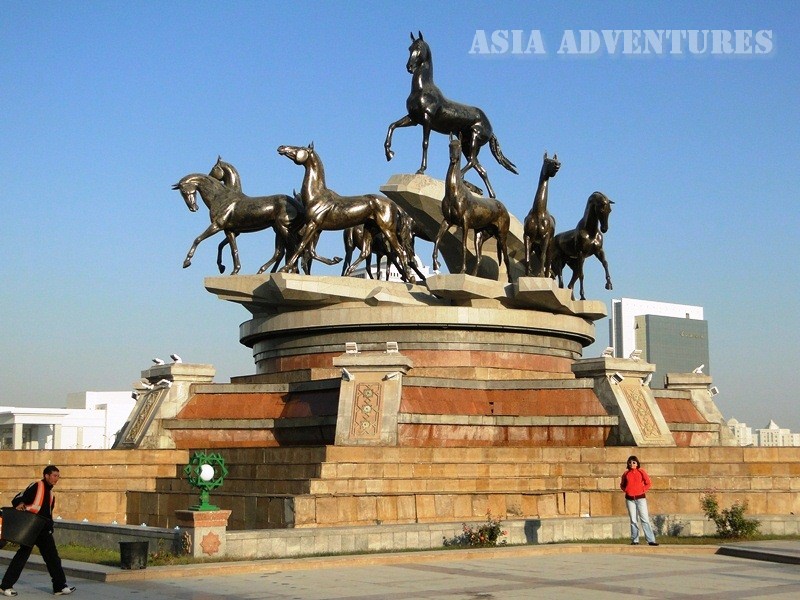 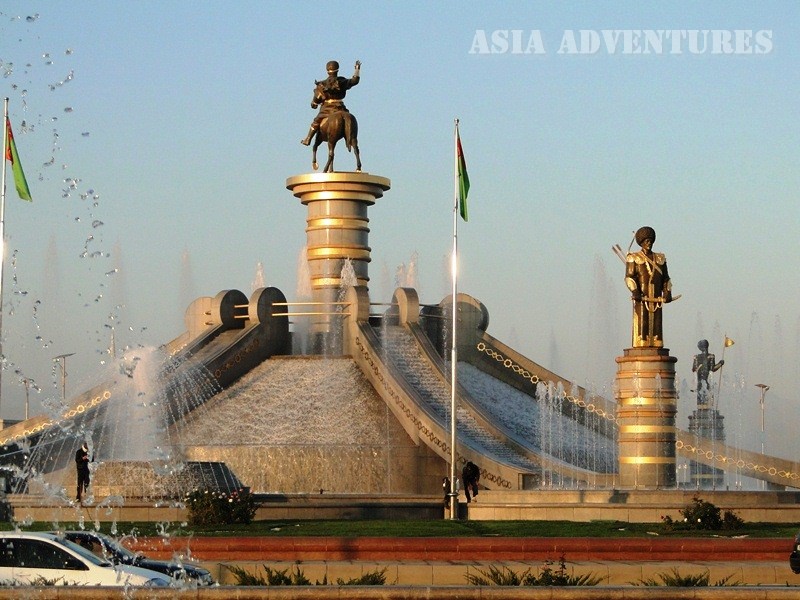 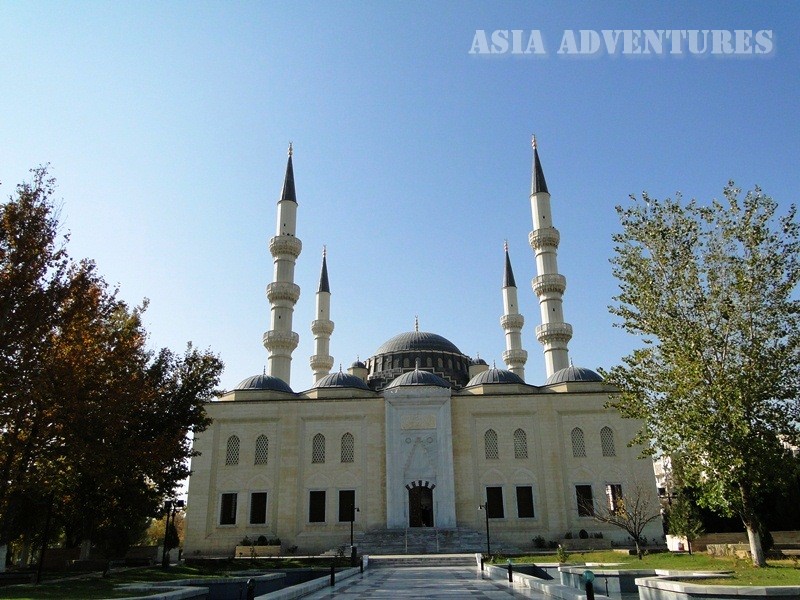 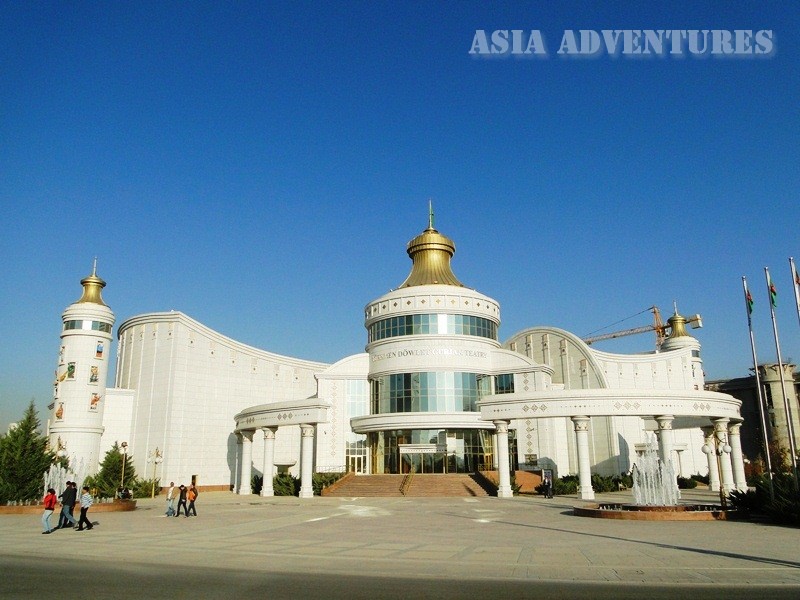 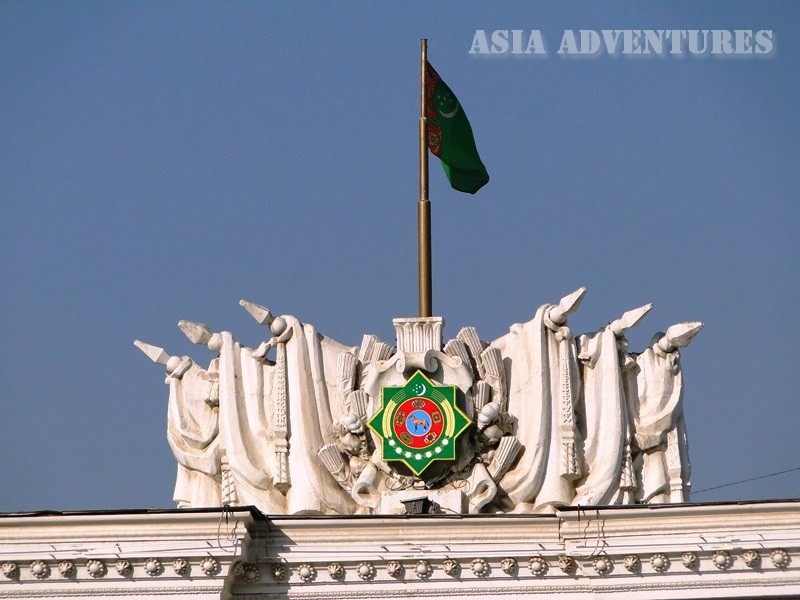 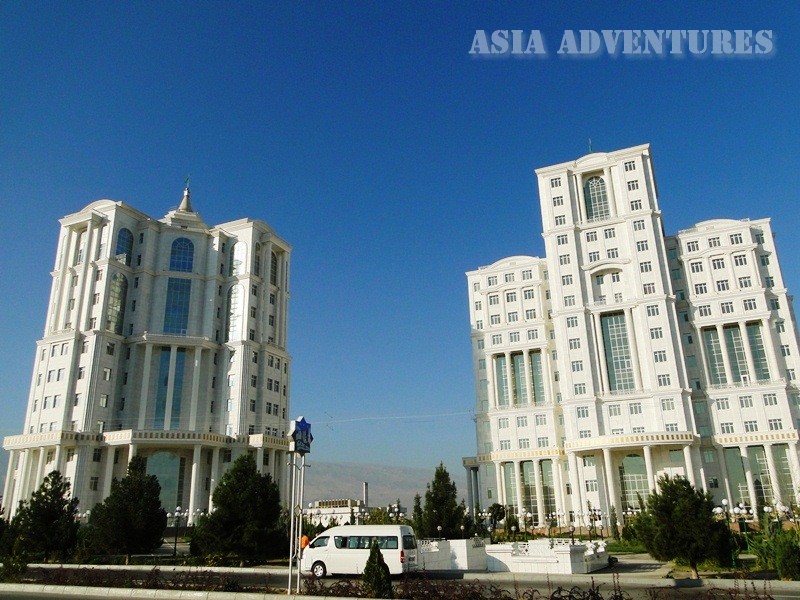 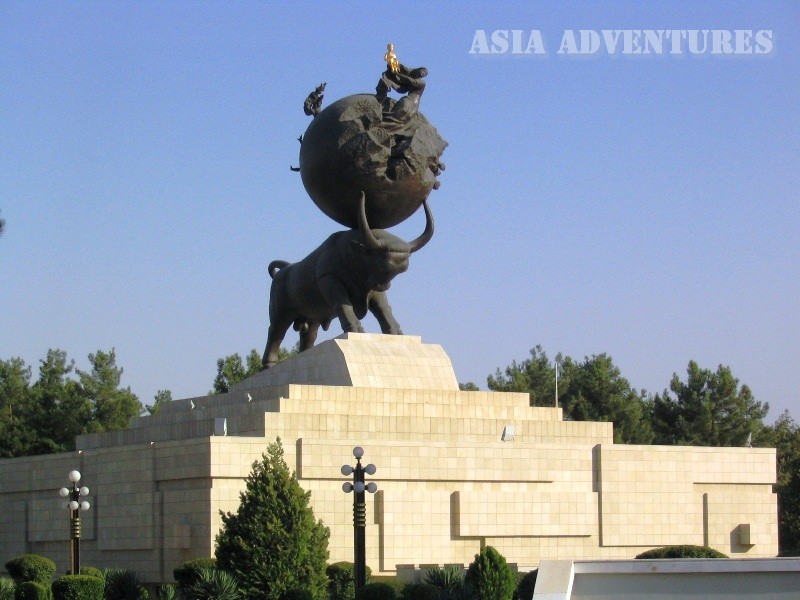 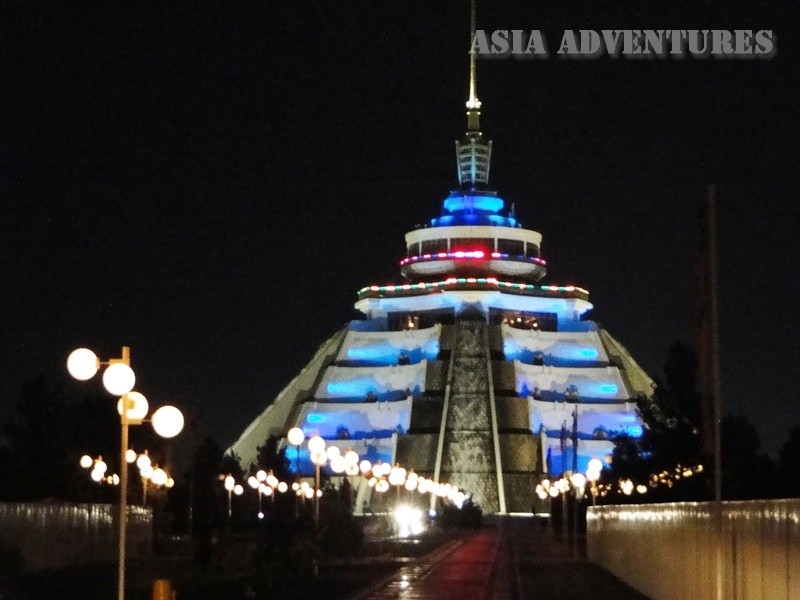 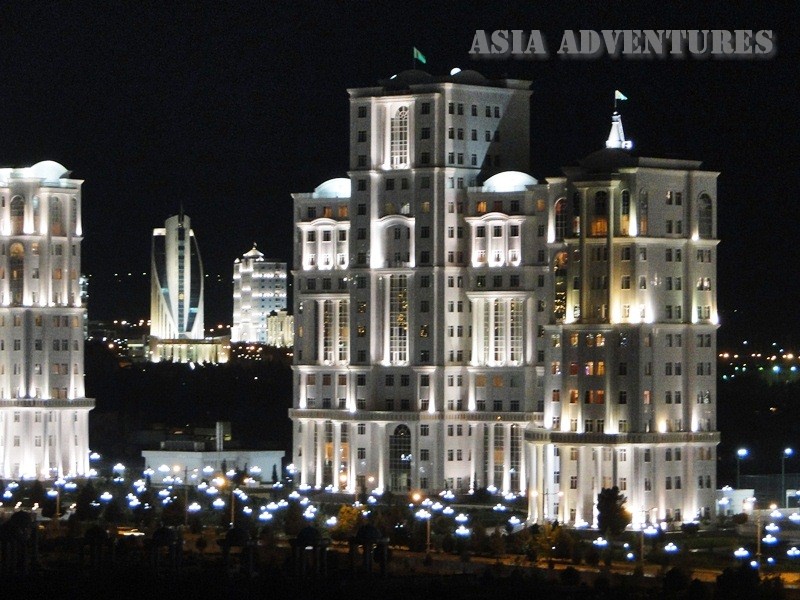 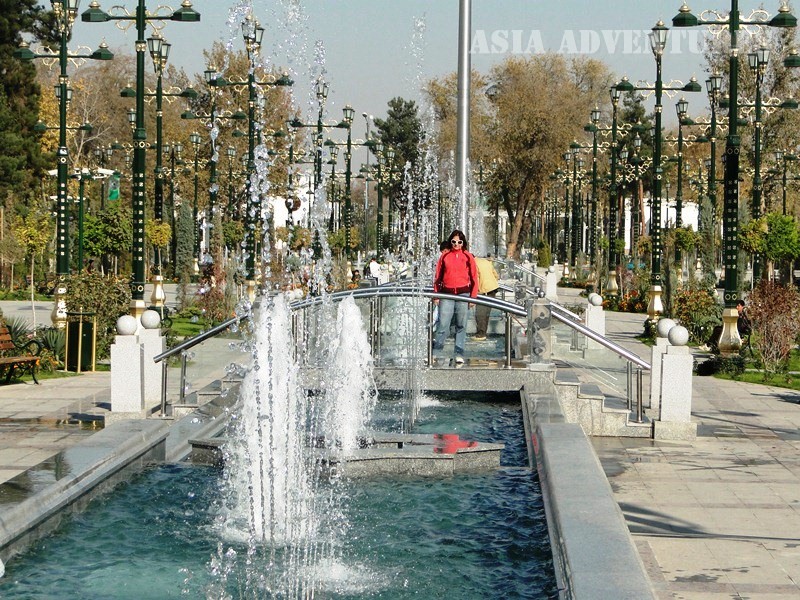 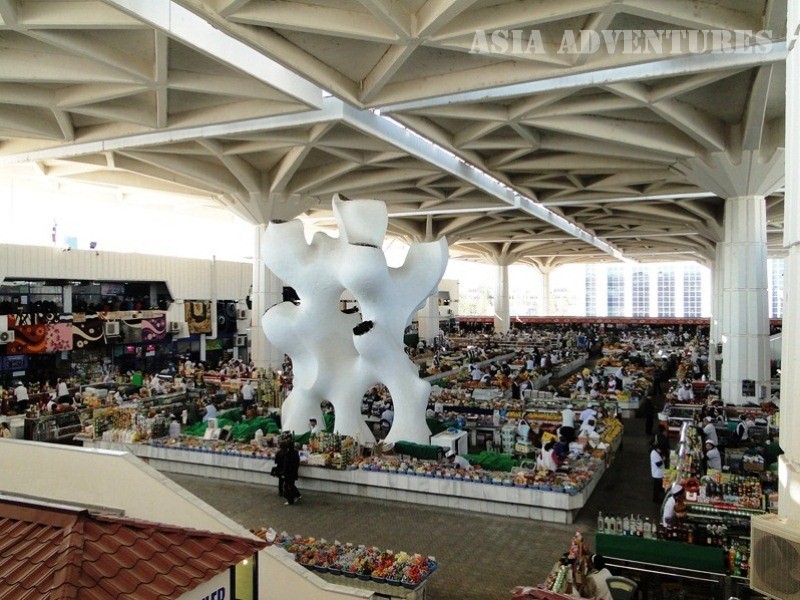