Urumqi is a cultural, administrative, commercial and tourist center of Xinjiang Uygur Autonomous Region of China. It is a huge metropolis with the population about 3 million people. Due to its geographic location it was the major trading city of the northern branch of the Silk Road in ancient times. Urumqi has become the largest shopping center in China for the last 20 years - it is a real paradise for shopping tours. Any city in China cannot offer a greater variety of goods than Urumqi. All products are delivered here from many factories in different provinces. There is also great night life here. More than 500 nightclubs, restaurants and discos offer boundless opportunities for recreation and entertainment.

There are not so many monuments of ancient history in Urumqi, but tourists can enjoy many other interesting sightseeing objects. Natural landscape areas are situated in 20-70 km from Urumqi in the Tien Shan Mountains. They are the most beautiful places of China and it is not without the reason that Urumqi is translated from the ancient Mongolian as "beautiful pasture".

Attractions in and around Urumqi

The mountain "Hun Shan" (Red Hill) is a symbol of Urumqi.
Red Hill is situated in the center of Urumqi. It has such name because of brown-red color of the sandstone and red clay on top of the mountain.
Hun Shan (Red Hill)more details...

Xinjiang State Museum is one of the oldest, largest and most interesting museums in China and Central Asia. More than 50 thousand unique historical artifacts from all over Xinjiang are exposed here. The total area of showrooms is 7800 square meters.
Xinjiang State Museummore details...

This is the central and largest bazaar of the city. Bazaar was reconstructed and completed in 2003 in Islamic style, and it looks like a huge palace with towers and domes.
Erdaogiao Bazaarmore details...

Confucian Temple was built during Dynasty Zing (1767). Now Urumqi museum is situated here. Its expositions show the history of the city and the temple. This is the exposition of Urumqi cultural relics, the exhibition of the history of city construction, the exhibition of stone figures and stone flags, and the exposition of Confucius great achievements. Important historical documents of Urumqi are also presented here.

Urumqi marine Aquarium is the best and biggest in Central Asia! The creators of this huge water world have done everything for you can feel yourself in a magical underwater kingdom. More than 400 species of marine inhabitants are presented on the area of 3,000 square meters. They are trained sea bears, corals, fish, which are collected from all corners of the world. And at the end you will see the show with sharks and dance under the water!

National Park has 115-years history (was built in 1883). It’s previous name was Jianhu Park or West, because it is situated to the west of Urumqi "West Bridge". The park was laid out in traditional Chinese style of garden architecture. This is the perfect place to relax, very green with lots of flowers. It is located in the place, where officers, who built Urumqi, had a rest (1755). There are many beautiful places for recreation: children"s amusement park, a roller, etc. The old lake is filled with boats. In spring and autumn there are the exhibitions of flowers, landscape design, portrait paintings and photographs. In winter there is a festival of ice sculptures and ice-skating rink is opened.

"The Streets of Lamps"

This is real Chinese exotics! During the day, this street does not attract your attention. But in the evening, it turns into a huge outdoor "refreshment stall ". There you can find everything: shrimp, crayfish, crabs, mussels, small and large snails, larvae of the silkworm, foot of octopus, sparrows shashlik. All of these are roasting, steamed, and something is even moving. You decide - take a chance and have authentic Chinese food or go to the restaurant, where all meals are adapted for tourists.

It is located in the southern part of Urumqi, in the native zone Yanervo. It was opened officially in 1987. Now it is the biggest amusement park in Northern China.
Attractions Parkmore details...

Local people call Salt Lake - "Chinese dead sea". The area of this lake is 54 square km and it is located in 70 km from Urumqi on the east part of Chayvopusk cavity at the southern foot of Tien Shan Mountains.
Salt Lakemore details...

Tien Shan Zoo Safari is the largest one in China. Its area is 75 sq. km. Safari Park is located in 40 km from Urumqi. Visitors of the park ride in special electric vehicles.
Safari Park (Tien Shan Reserve of Wildlife)more details...

Tien-Chi lake (Heaven Lake) is situated in 120 kilometers from Urumqi in picturesque Tien Shan mountains at 1980 meters altitude above sea level. Its length is 3.3 km, and at its widest point is 1.5 km. The area of the lake is 4.9 km, the maximum depth is 105 meters. The moon-shaped lake has a glacial origin. In ancient times Tien-Chi lake was called Shi Yao (Jade Lake).
Heaven Lakemore details...

The geographical center of Asia continent 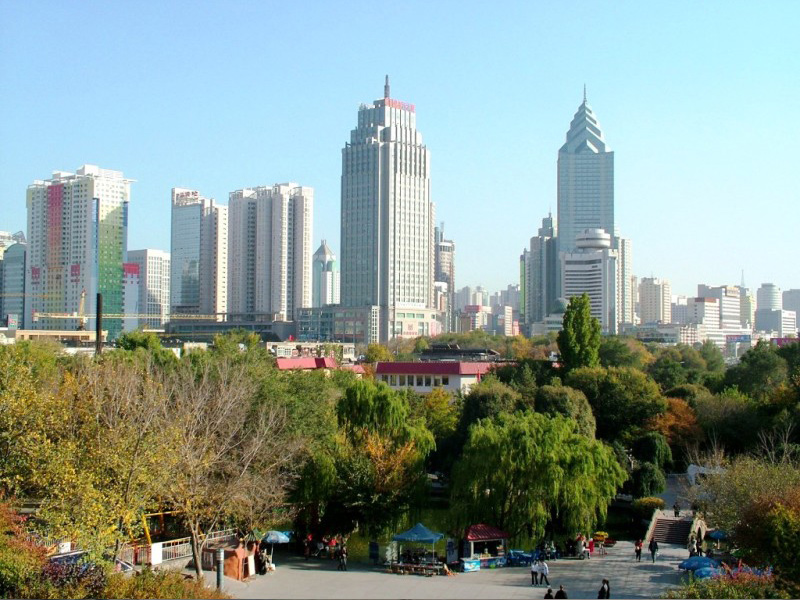 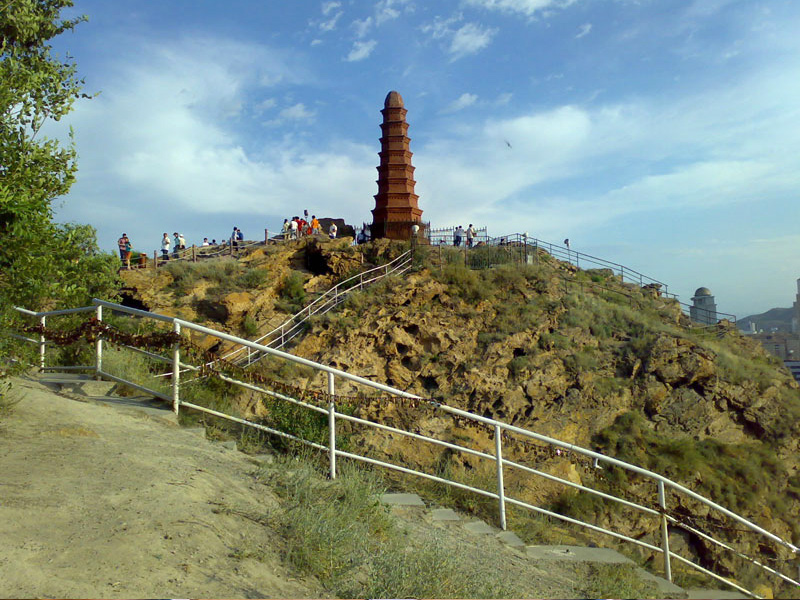 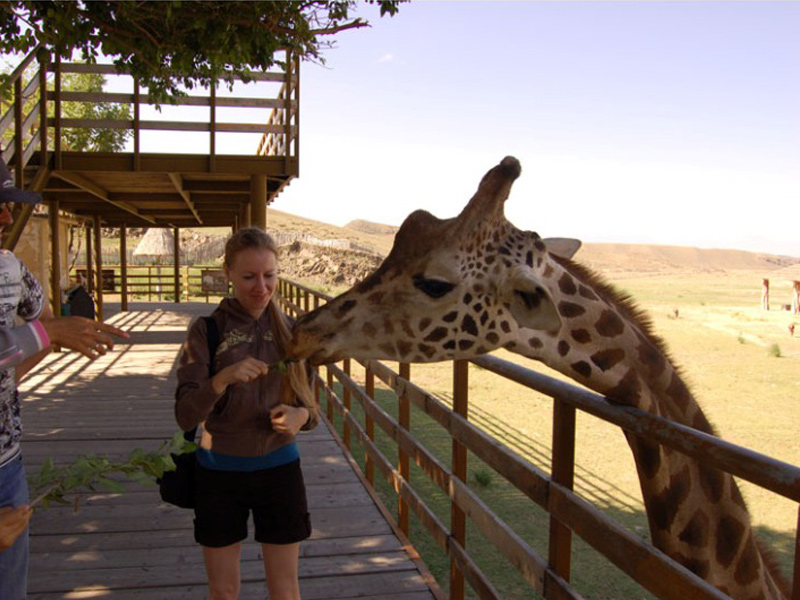 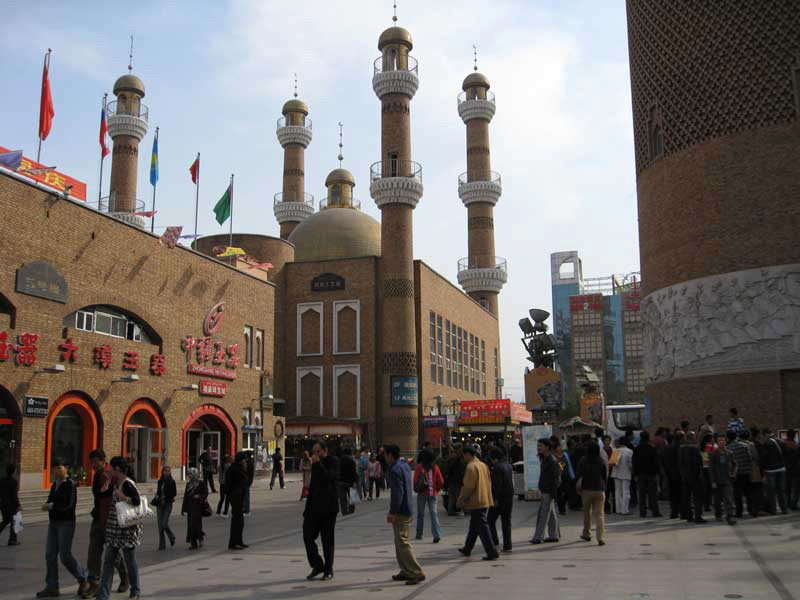 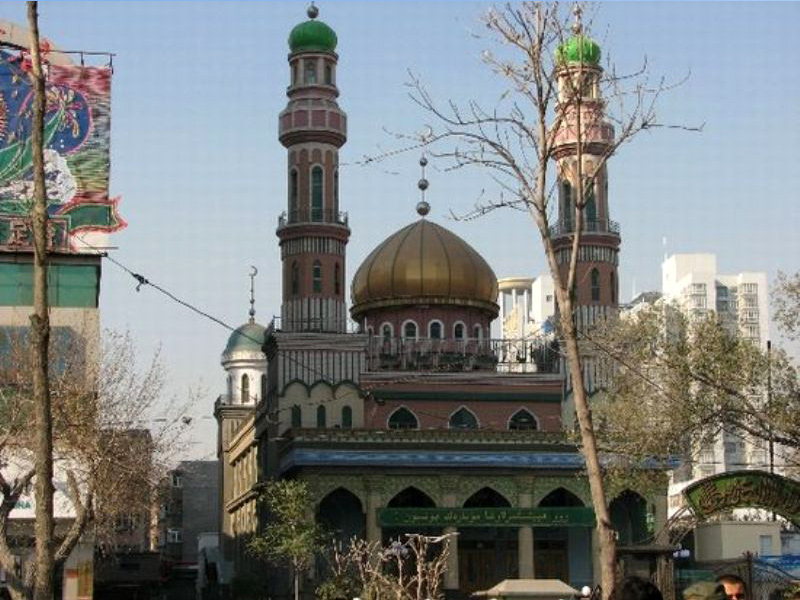 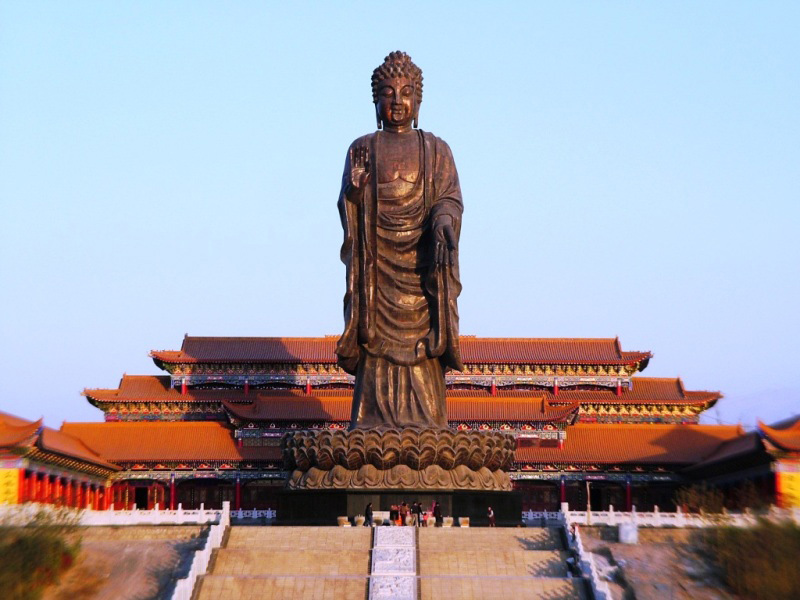 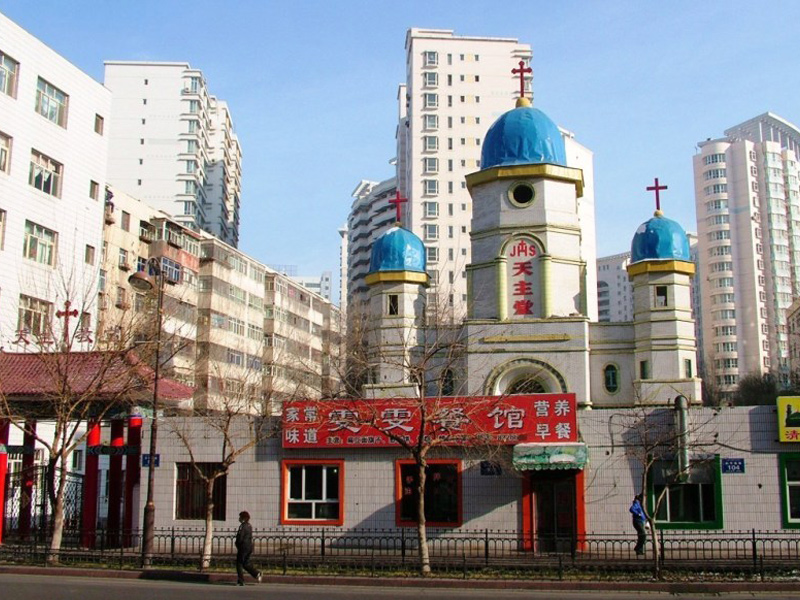 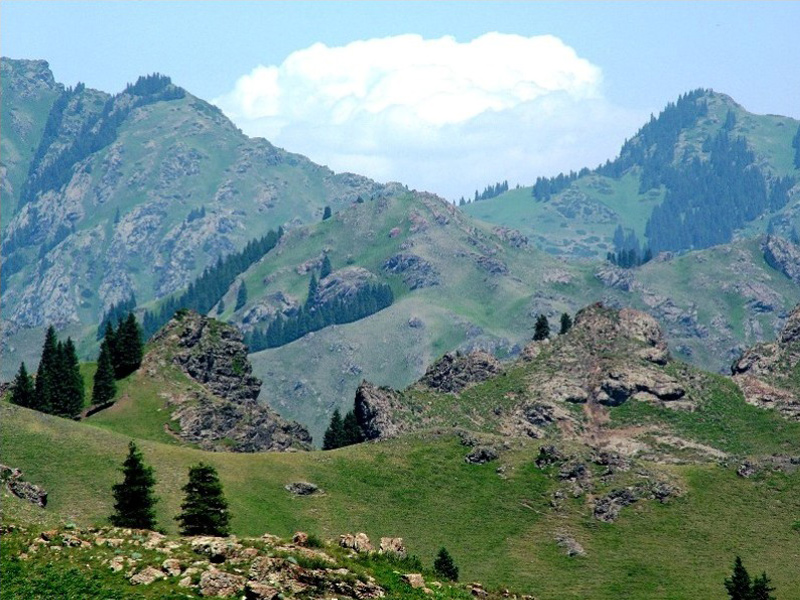 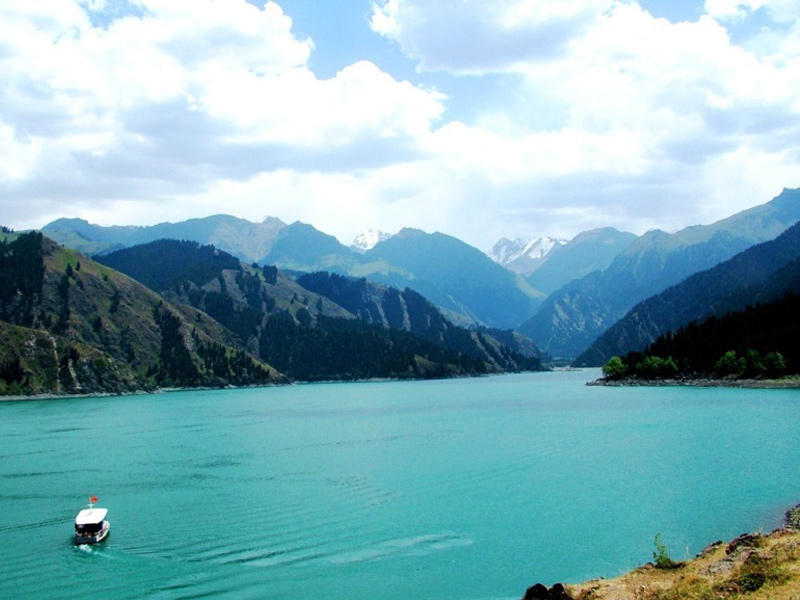 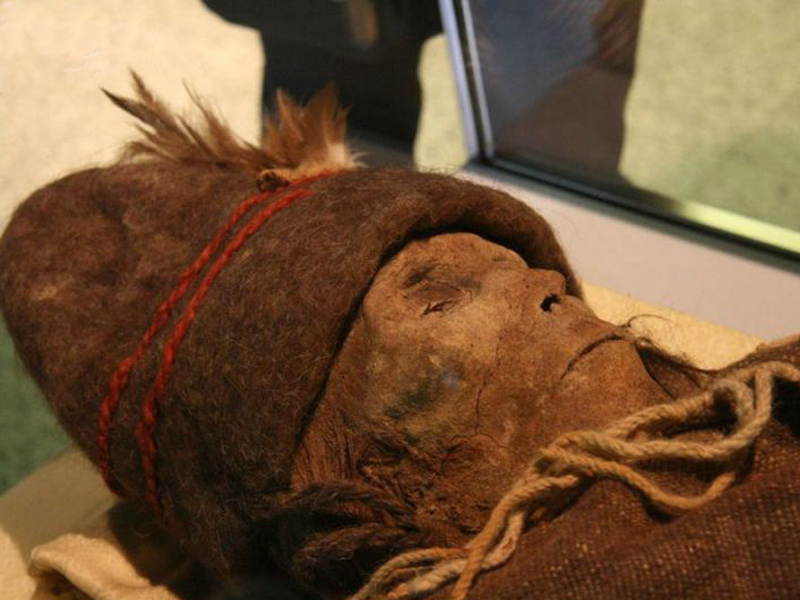 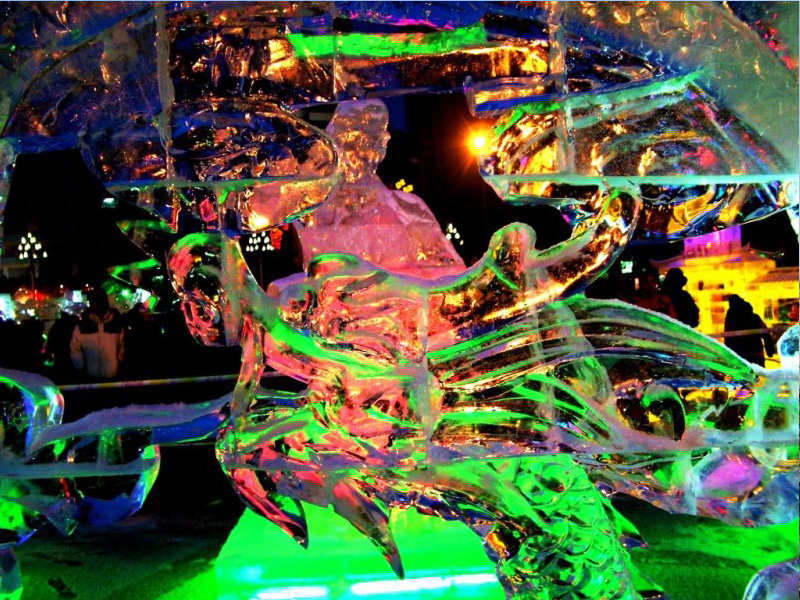