Decorative and Applied Arts and Artistic Crafts in Uzbekistan

Artistic crafts occupy an important place in the Uzbekistan cultural heritage. The secrets of craftsmanship have always been passed from generation to generation, while ancient decorative patterns have been carefully preserved by artisans. The various artistic crafts have been formed around ancient artistic schools. The combination of the ancient and the contemporary in architecture, art and traditions is what makes Uzbekistan a real pearl of Central Asia.

Artistic ceramics is one of the most interesting types of applied arts of Uzbekistan. Items made by masters from Rishtan (Fergana valley), Gijduvan (Bukhara province) and Urgut (Samarkand province) can delight anyone with their original decorative designs, bright colours and infinite fantasy.

Uba (Bukhara province), Nurata (Navoi province) and Denau (Surkhandarya province) are places famous for their clay toys, which in most cases have the appearance of fantastic and real animals. Clay whistles in the form of animals are one of the most popular types of toy. The Central Asian toy is a unique phenomenon, which is not so common nowadays. Each region produces its own range of toys with original motifs.
more...


Carpet making is a very ancient craft. The high level of weaving technique, the bright colours and the original patterns make Uzbekistan carpets highly popular among tourists. The ancient traditions of Uzbek weavers are embodied in carpets, each of which is a real piece of art becoming in the course of time a valuable antique, a pride for its owner and an indispensible element of a majestic interior.

Several types of oriental art, such as carving in ganch (alabaster), stone and wood and painting on wood and ganch, are widely used in the decoration of monumental buildings and of the interiors of palaces, museums and theatres in Uzbekistan.

The ancient technique of painting miniatures with varnishes has been preserved and is used widely today. Caskets and boxes painted with scenes of everyday life and fragments from the works of Uzbek poets, as well as decorated pumpkins, charm people with their bright colours, fine lines and delicate forms.

Copper-chasing is another interesting type of folk art. Copper was usually used in producing various kitchen utensils, which were decorated with images of animals and birds, often made in relief and sometimes forming an individual element of an item (for instance, the spouts of kettles and jugs). Geometric and calligraphic ornaments and astral motifs are also quite characteristic of Uzbek copper items. Chased copper articles from Bukhara, Samarkand, Fergana and Tashkent are the most popular.

The art of making knives occupies a special place among other artistic crafts of Uzbekistan. High-quality steel is used in the production of knives’ blades, while the hafts are made of wood, animals’ horns and metal and decorated with inlay, precious stones and geometric and plant ornaments.

In the old times, apart from the knives’ hafts, the work of jewellers also included the decoration of the sheaths of sabres, men’s belts and elements of a horse’s harness. However, the main occupation of zargars (jewellers) was to produce various adornments for women. Jewellery from various historical periods is kept at the museums of Tashkent, Bukhara and Samarkand. Contemporary masters (usto) revive the forms of these ancient pieces of art in their workshops.

Goldwork as a unique method of decoration of clothes and fabrics occupies a special place among the traditions of the Uzbek art. Bukhara always was and still is the centre of the art of embroidery with gold threads. Masters decorate various types of clothes, from skullcaps to robes, large tapestries and other fabrics. Today in a goldwork shop you can purchase readymade items or order an exclusive article of clothing. 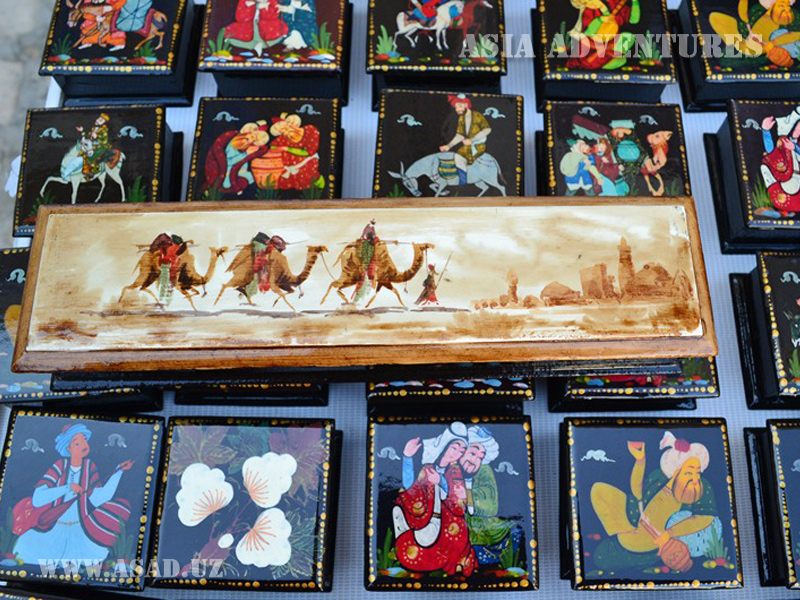 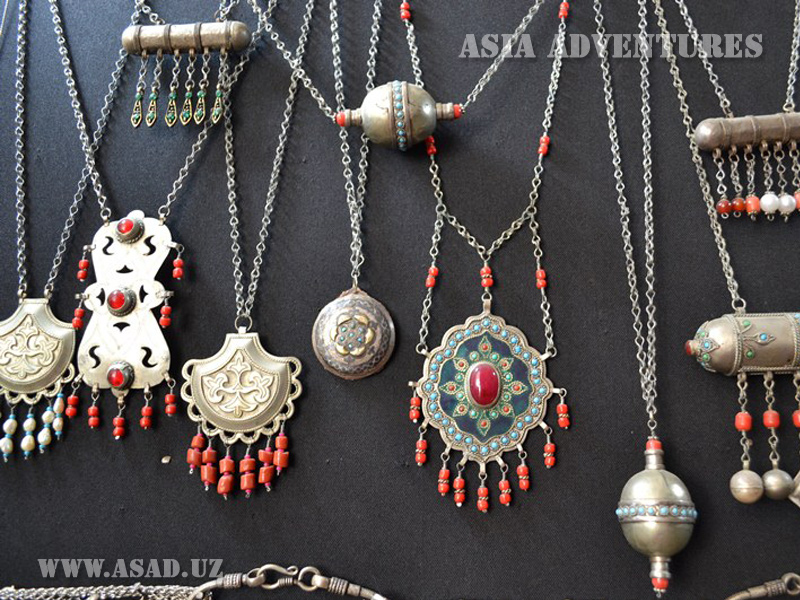 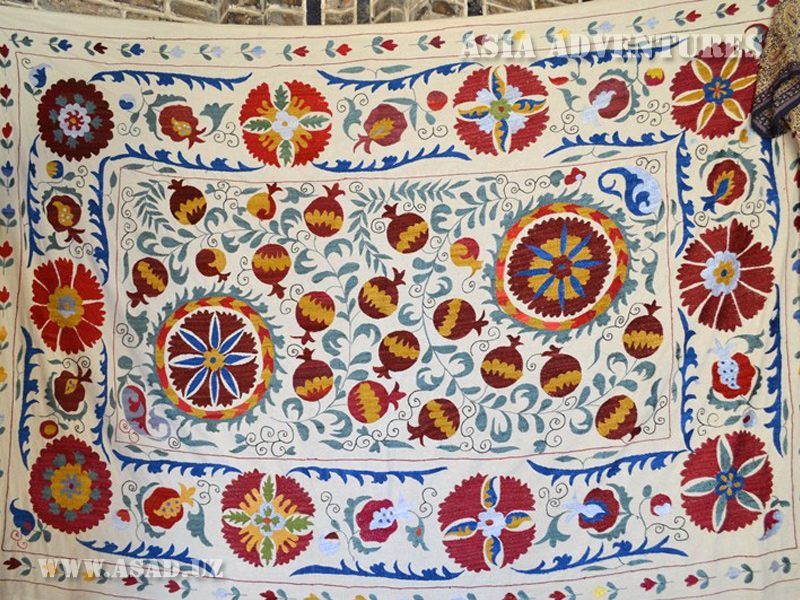 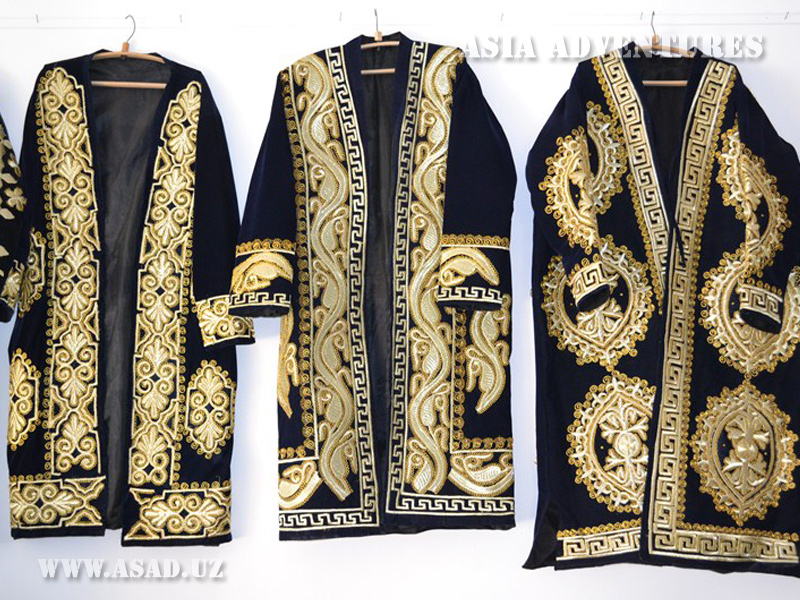 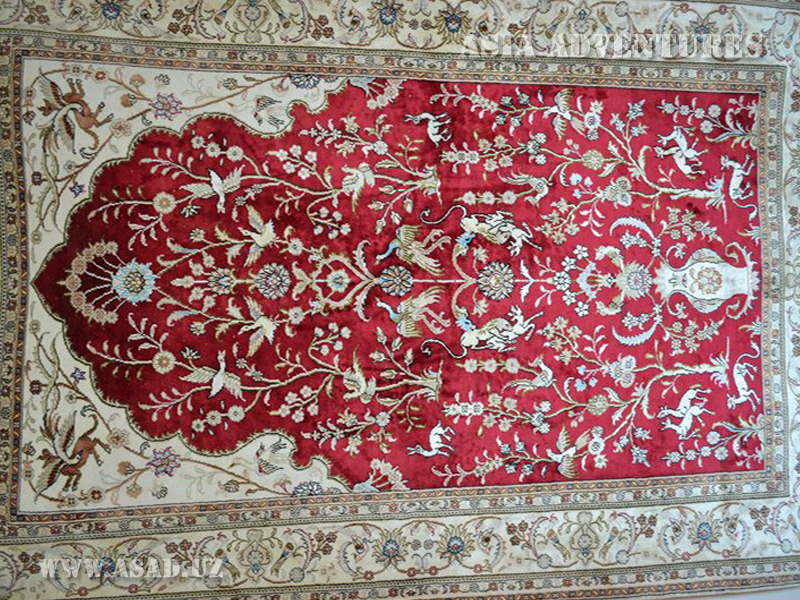 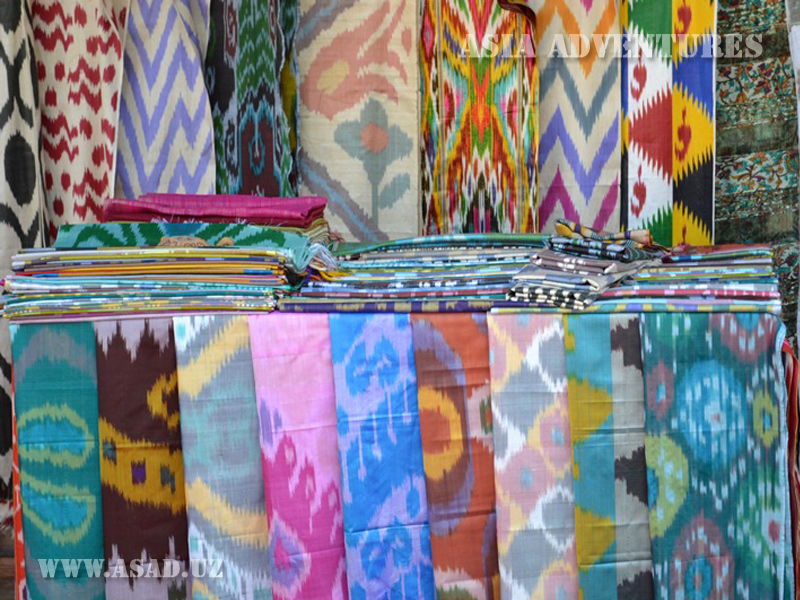 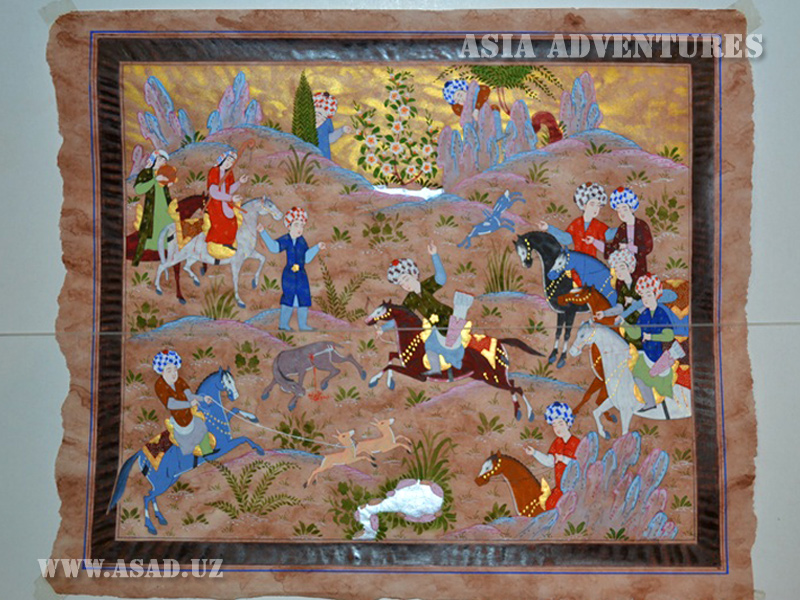 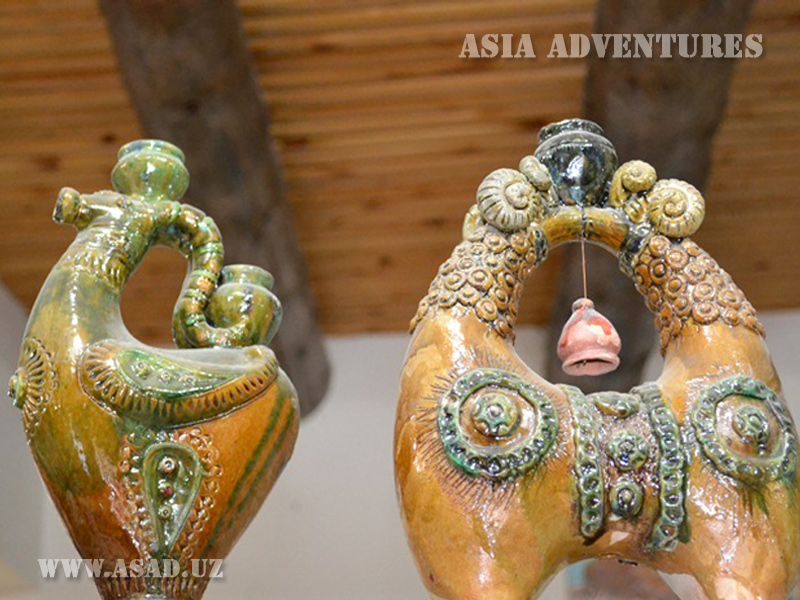