Andizhan is a major Uzbek city in the southeastern part of the Fergana Valley, 350 km from Tashkent and 50 km from the Kyrgyz city of Osh.

Andizhan sprang up in the early centuries AD as an important point on the Great Silk Road. According to the travel notes of Arab historian Ibn Khaukal, in the 10th century the site of present-day Andizhan was occupied by a relatively large settlement of traders and craftsmen, who also were good at agriculture. Andukan (Andizhan) is known to have been an economically developed city in the Timurid period, which even minted its coins at that time. Afterwards, in the late 15th-early 16th centuries, the city was the capital of the Fergana Valley governed by poet and scholar Zahiriddin Muhammad Babur, the last representative of the Timurid dynasty in Central Asia known more in the world history as the founder of the enormous Mogul Empire in India.

In 1876 the Khanate of Kokand was captured by the Russians and Andizhan was included in the Russian Empire.

Places of interest and tourist attractions in Andizhan

Despite its long and eventful history, there are very few extant historic monuments in Andizhan. Many of such were destroyed in the course of the 13th-century Mongol invasion. In 1902 the city suffered a severe earthquake, which destroyed almost all ancient structures.

The only architectural monument that survived the 1902 earthquake was the Jami cathedral mosque with a madrasah (religious school) and a minaret. Built in the late 19th century, the construction features large dimensions. Its length is 123 m, and its court is surrounded by 120 rooms (khujras), in which formerly the madrasah students lived. Currently, the minaret, mosque and madrasah form a single complex on an area of 1.5 ha. The Jami mosque was being constructed for over seven years. Even today its size really strikes: its main façade consists of 26 large arches. The mosque was built in conformity with the architectural standards that prevailed in the region at that time – a rectangular hall with iwans in three sides. The fine fretwork of the wooden pillars supporting the vault, which consists of a combination of unusual geometric ornaments and floral patterns, is the distinguishing feature of the Juma mosque. The Juma minaret is the tallest one not only in Andizhan, but in the entire Fergana Valley. Built of octagonal bricks and rising to a height of 32 m, the tower truly dominates the surrounding area. Unlike the minarets in Samarkand, Khiva and Bukhara, covered all over with glazed mosaics, this one has only one decorative belt in the middle, while its upper part is ornamented with turquoise-blue tiles. A domed lantern tops the tower.

The former madrasah houses the Andizhan Museum of Literature and Arts. The collection comprises 7,000 books, 2,000 manuscripts and lithographs and 2,500 works of art and craftsmanship, alongside many other historical documents and photographs, all of which can be used to trace the development of the national culture.

The Andizhan Museum of Regional Studies contains about 70 thousand items representing various spheres of local science and culture, such as archaeology, ethnography, visual arts and crafts.

The Andizhan people hold their famous fellow countryman in high esteem. The city’s central square features an equestrian statue of Babur, while the state university, a public library and one of Andizhan’s avenues bear the name of the great ruler. Moreover, the Bagishamal Hill in the southeast of the city, which, according to Baburnama, was once the site of the great emperor’s khujra with an iwan, is currently occupied by a park named after Babur and featuring a wonderful architectural complex. Flowers and plants from different parts of the world adorn the park’s area, with over fifty types of fruit and ornamental trees growing across the territory. An arch decorated with traditional oriental painting leads inside the memorial complex with the symbolic tomb of Babur containing soil brought from Agra and Kabul, the locations of the poet’s actual graves. The architectural complex includes a statue and museum Babur and World Culture boasting a large number of rare exhibits illustrative of the Baburids’ rich historical heritage. A ropeway brings visitors onto the hill’s top, from where they can admire the marvellous panorama of the city so adored by Babur.

The central Alisher Navoi Park also attracts many of the city’s guests. A café under the wing of a monumental sculpture of bird Semurg, which is believed to bring happiness, is one of the park’s main features. The area is used to organise official ceremonies dedicated to the holidays of Navruz and Mustakillik (Independence). In the old part of the city tourists can visit Babur’s memorial museum and the 14th-century Khoja Noib madrasah.

Andizhan is also famous for its artisans specialising in ceramics and artistic engraving, while gold and silver adornments made by Andizhan jewellers are popular far beyond the city’s boundaries. Traditional Uzbek knives and daggers, finely embroidered neckerchiefs and skullcaps, traditional footwear and handmade dolls may be excellent souvenirs from Andizhan.

There is another remarkable historical complex in the outskirts of Andizhan – Kala (1881—1882) currently housing the art gallery of the Andizhan Museum of Literature and Arts. In Markhamat Disctrict, 30 km from Andizhan, there is the Mingtepa archaeological site containing the ruins of the city of Ershi, the capital of ancient state Davan. 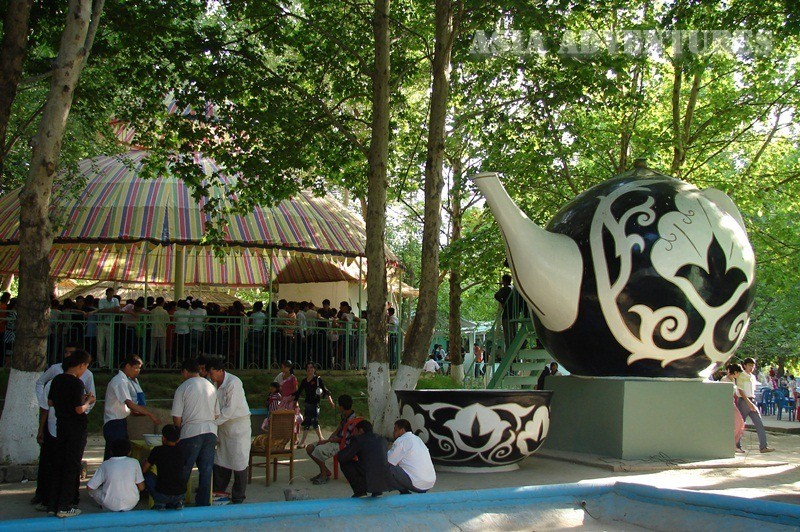 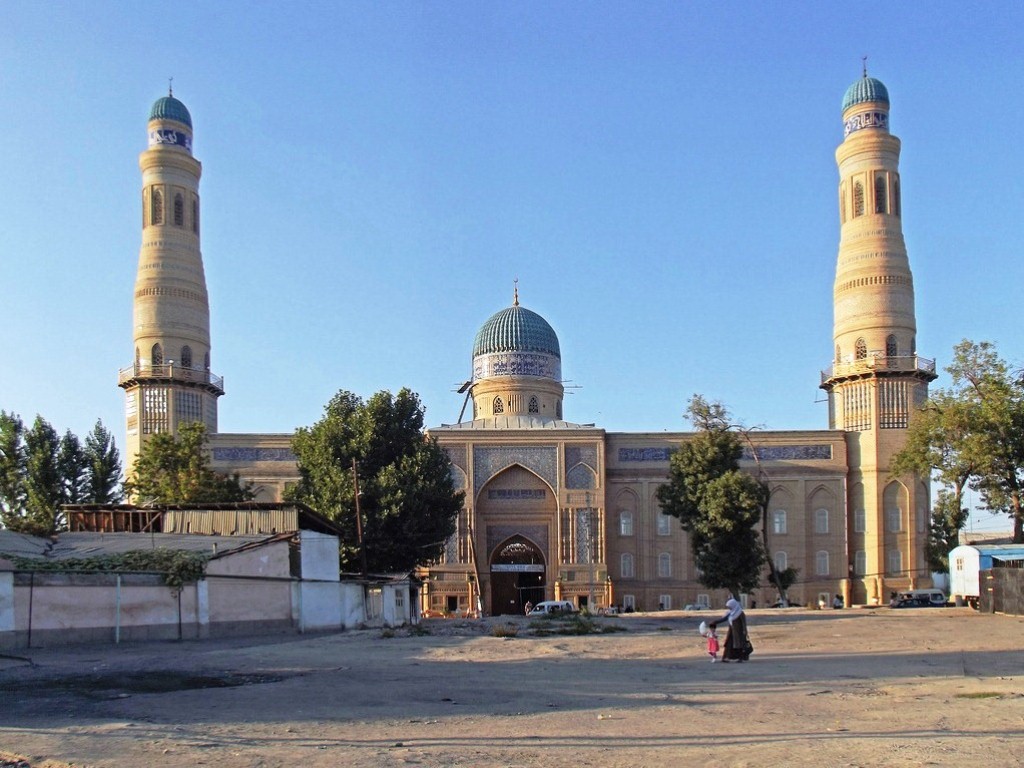 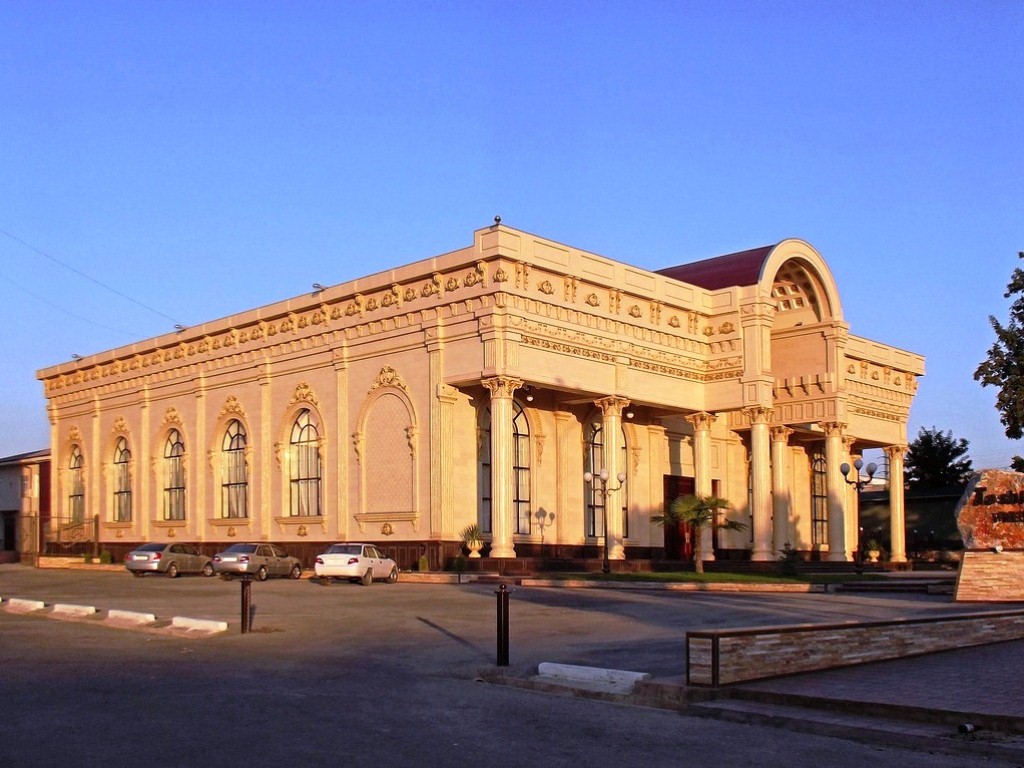 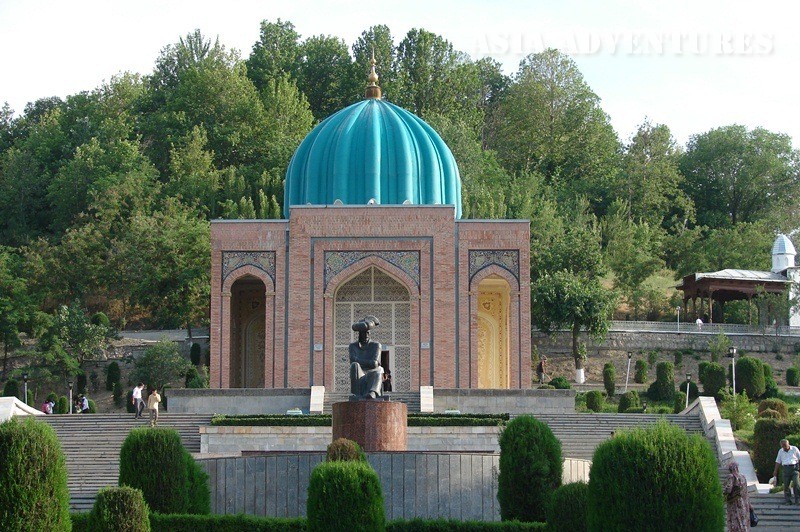 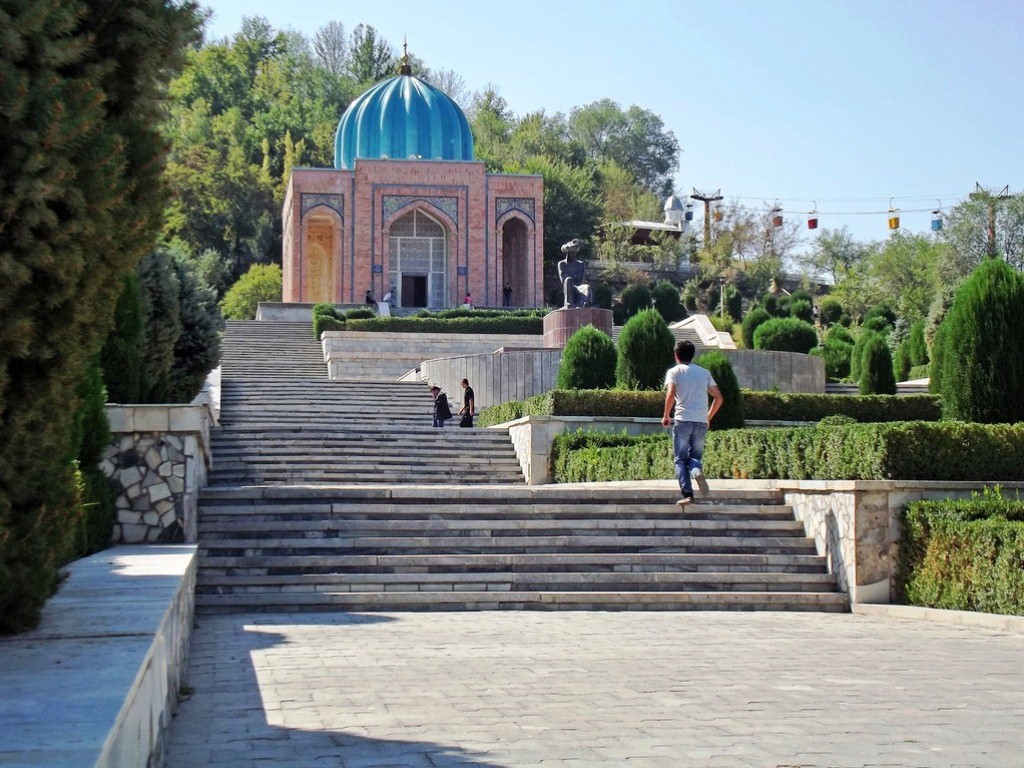 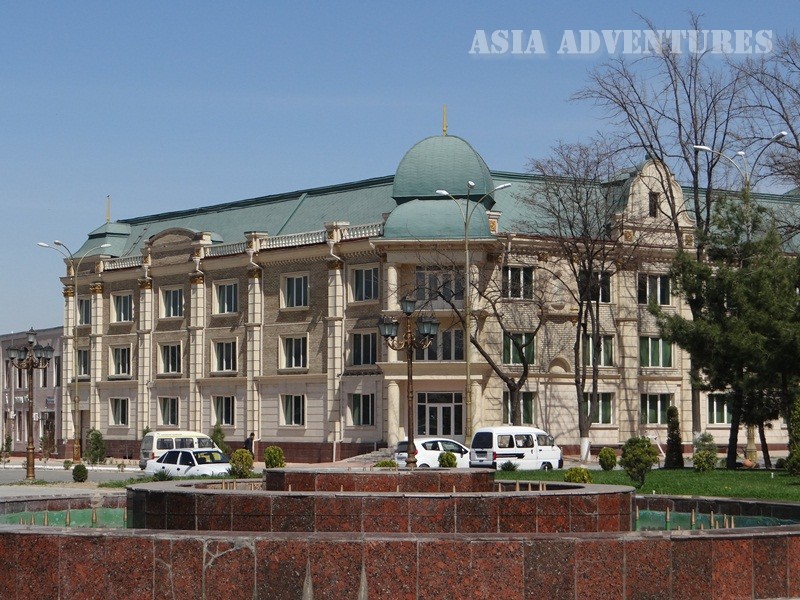 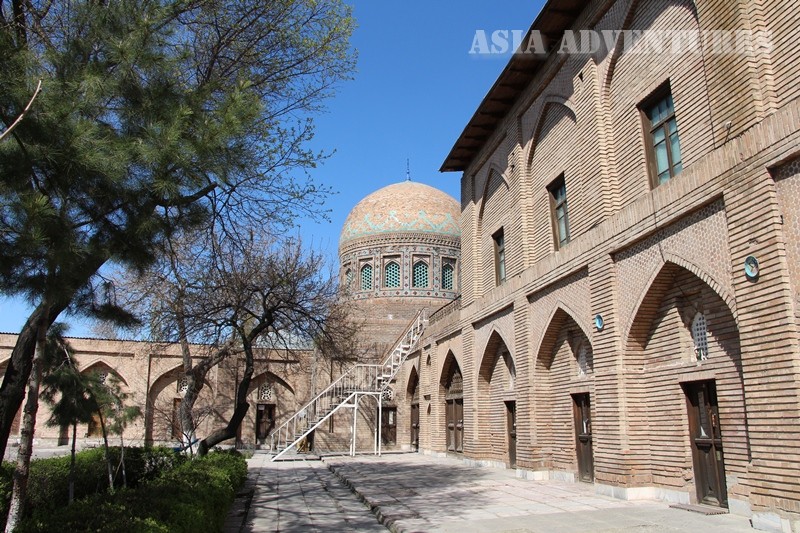 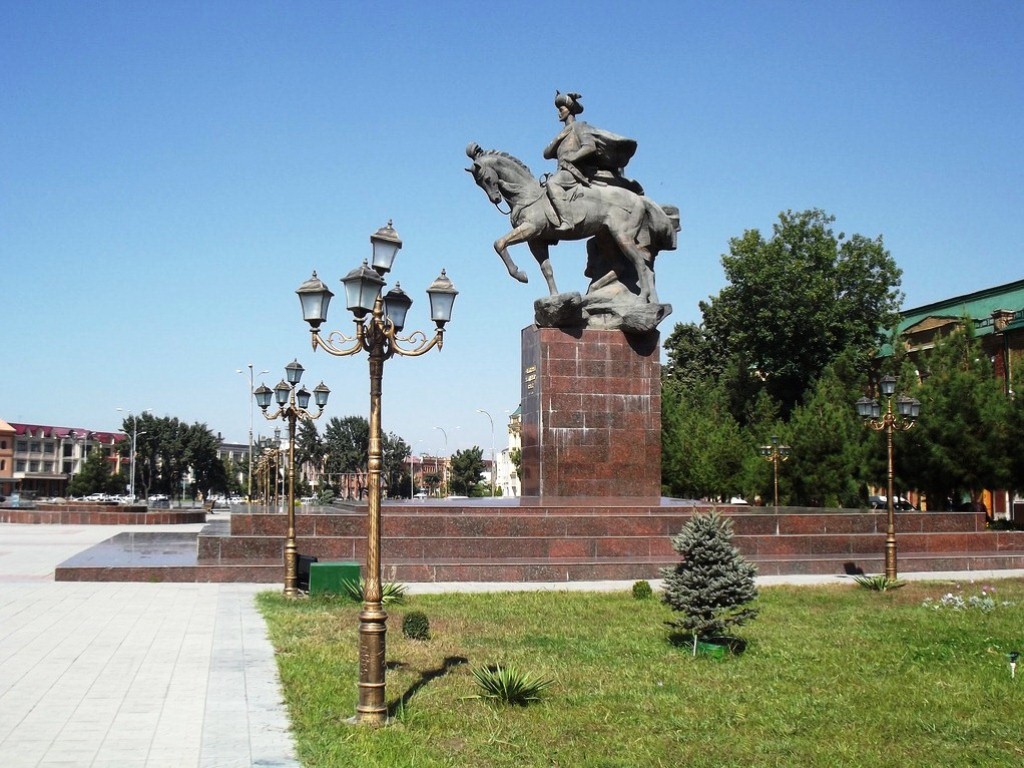