Marghilan city is a small satellite of Ferghana, its population is more than 200 thousand people, it is located on the mountain plain at the northern piedmont of Alay ridge in Marghilansay valley in 12 kilometers from Ferghana city. As many other cities of Ferghana valley, Marghilan had appeared at the early stage of organizations the silk caravan route over 2000 years ago and later it developed as a trade - craft town. The city is noted in Babur-name (“The notes”, “Memoirs” of Mukhammad Babur written in 20s years XVI century) among eight big cities of Ferghana valley. So Babur wrote about the city: "Marghilan is a very nice city, here you can find all the gifts of nature. For example, the most popular fruit are pomegranates and apricots”. Also Babur wrote that the natives of Marghilan had been always the most skilled wrestlers of fist fight, there were not equal ones throughout Maverannakhr (interfluves of rivers Amu Darya and Syr Darya). Maverannakhr was also famous for its skilful humorists-askiyaches. Askiya (the witticism) is a kind of Uzbek national folk, it corresponds extempore competition of wisecrackers- storytellers and demands from askiyaches unbelievable skill, quick wit and sharpness.

Primarily, Marghilan city was famous for its ancient traditions - manufacture of unique kinds of silk and abr fabrics, the fabrics which were created according to the ancient technique "abrbandi", in which some parts of the strands were colored alternately, until the process of weaving, the result was a unique contrast and color magic patterns. The imagination of masters creating as jewelry had no limits. Really, the term "abrbandi" came from the word “abr”, from Arabic it means “ the cloud”, hereof the Russian name abr fabrics.

A legend prescribes the creation of this technique to the young Marghilan weaver, who hopelessly fell in love with the local ruler’s daughter. According to ruler’s order, the young man must weave the fabric of great beauty during only one day, and thus to prove the purity and sincerity of his feelings. Having spent the whole day at the pond, thinking the pattern of fabric, the young weaver noticed in the water reflection of clouds sailing in the sky.

So, according to the legend, this unique and very difficult technique of the fabrics ornamentation appeared, it is considered a real work of the decorative art in Central Asia.

Today three silk production factories: "Yodgorlik", "Fayzulodin" and "Atlas" operate in Marghilan, and also many crafts men, which carefully preserve and revive the secrets of Marghilan fabric manufacture. Among the major producers of silk, the most popular touristic factory is "Yodgorlik." This historic factory was founded in 1972 and has played an important role in the revival of sericulture in Uzbekistan. Indeed, here is keeping the manual mode of vintage fabrics production on the ancient wooden spinning machines for many decades. During the excursion on the factory, guests can get acquainted with all stages of silk production from the unwinding cocoon fiber and getting the yarn to the special old technology of coloring the cocoon fiber - "abirbandi", also known as "ikat". At the factory, you can also buy souvenirs: scarves, the lengths of silk, semi-silk and cotton fabrics.

The architectural complex of Pir Sadyq is the oldest among monuments of the city. The complex was formed around the mausoleum theologian Pier Sadiq’s late construction (1742), who was a spiritual mentor of famous fakikhm - jurist Imam al Marghinani Burkhanuddin (1118-1197). Extant architectural complex includes a mausoleum (11,8x11m) wreathed with a dome, a mosque, a minaret and a dovecote. In the courtyard of the complex there are two burials, and a veranda "ayvan" with dovecote.

Another historical monument in Marghilan is the Mausoleum of Khoja Magiza - one of the first preachers of Islam in Central Asia, which became a place of pilgrimage in the next centuries after Arab conquest, the cemetery appeared around that place. The mausoleum over Khoja Magiza’s grave, consisting of a rectangular room with 4,4 meters diameter dome, was built in the beginning of XVIII century during the reign of Kokand khans and became the most famous place of pilgrimage in Fergana Valley. This mausoleum is a unique architectural creation not only for Marghilan, but also for Central Asia.

Among the sights in Marghilan, the earliest one is Chakar mosque, it consisted of summer and winter mosques, and a number of utilitarian buildings. Only a summer mosque with east-facing veranda (ayvan) in asymmetric shape has survived to our time. A roof deck of the mosque rests on wooden pillars. The ceiling of the mosque where the date of construction (1911) and names of builders (Usta Tukhtabek and Mir Bobo Khodji from Khujand) noted, is decorated with multicolored paintings depicting vases with flowers and other floral motifs in the best tradition of famous mural of Ferghana Valley. 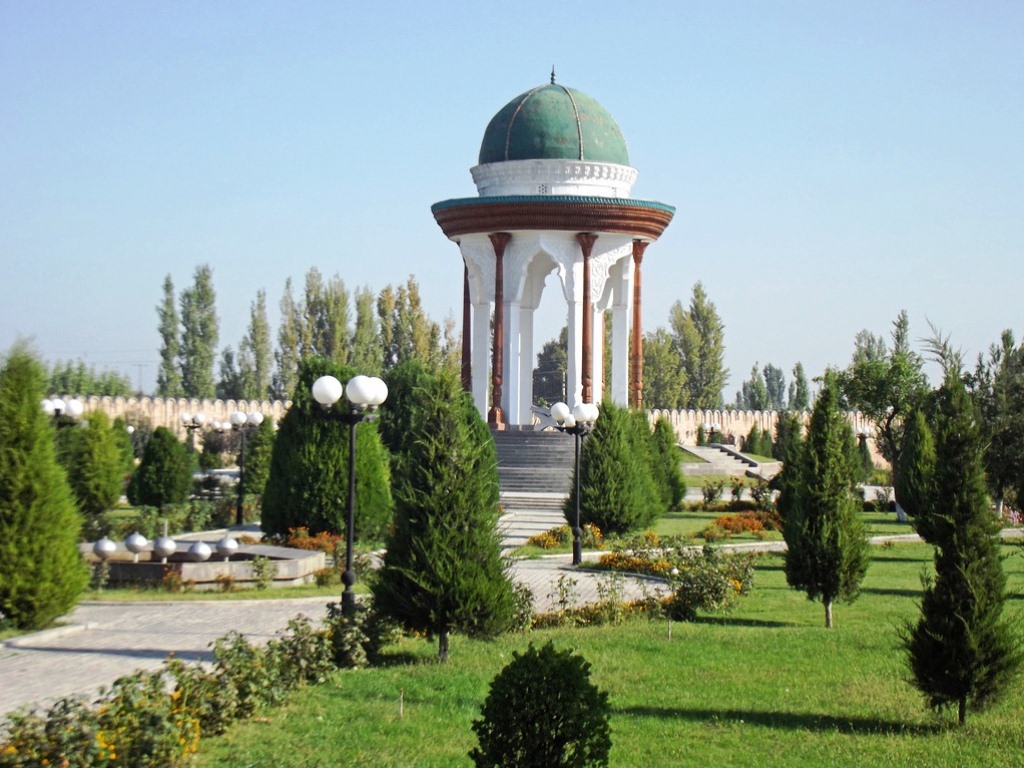 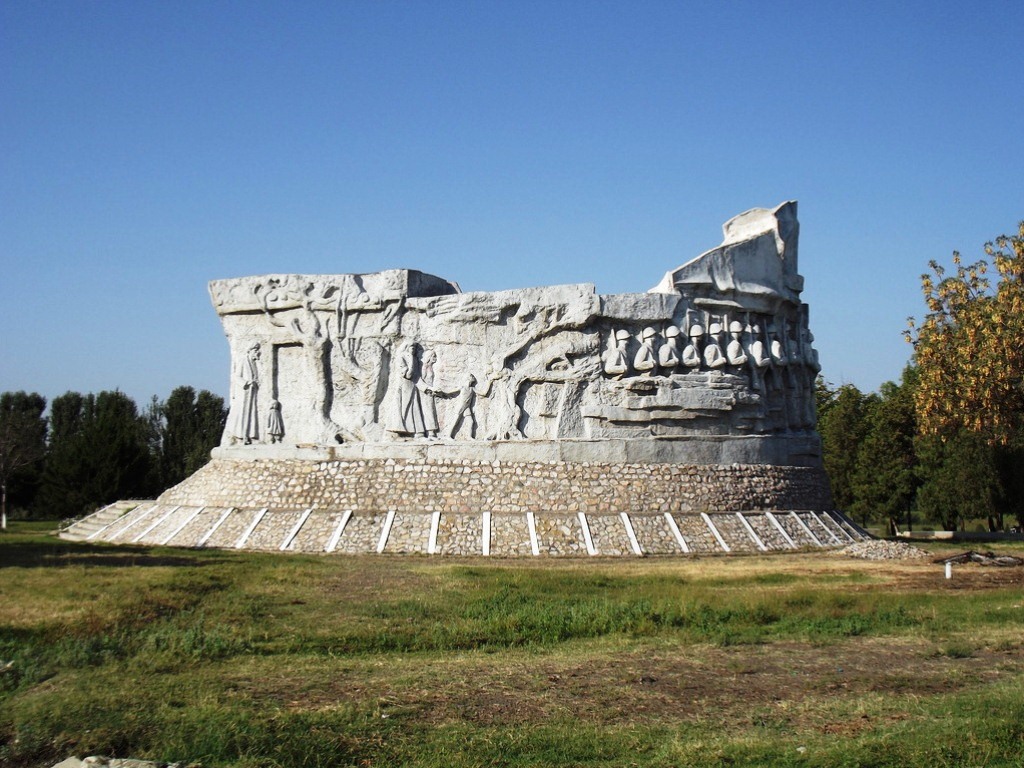 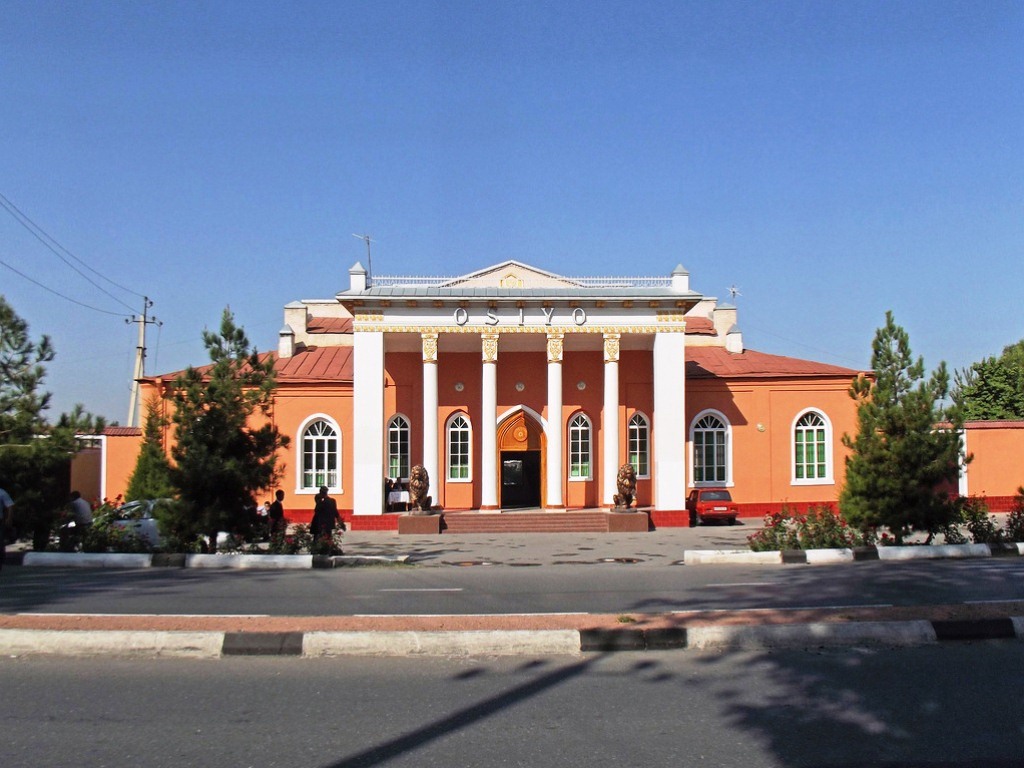 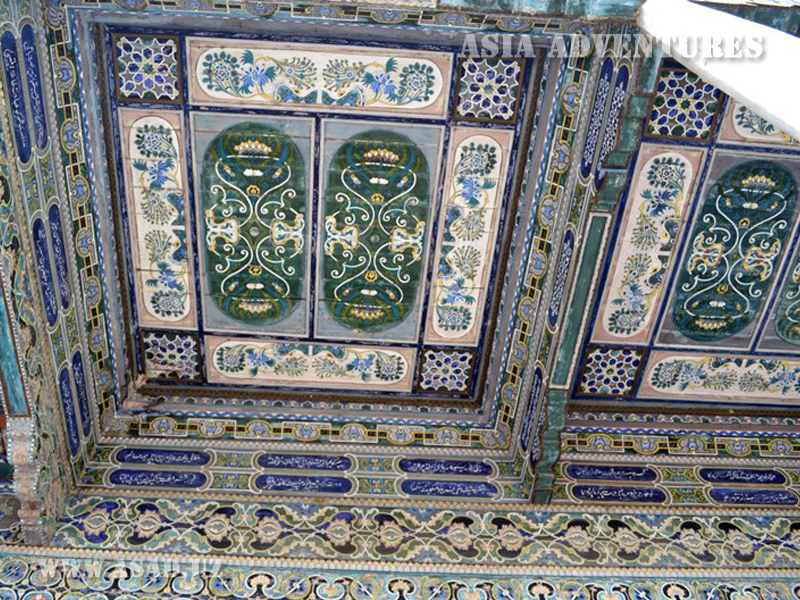 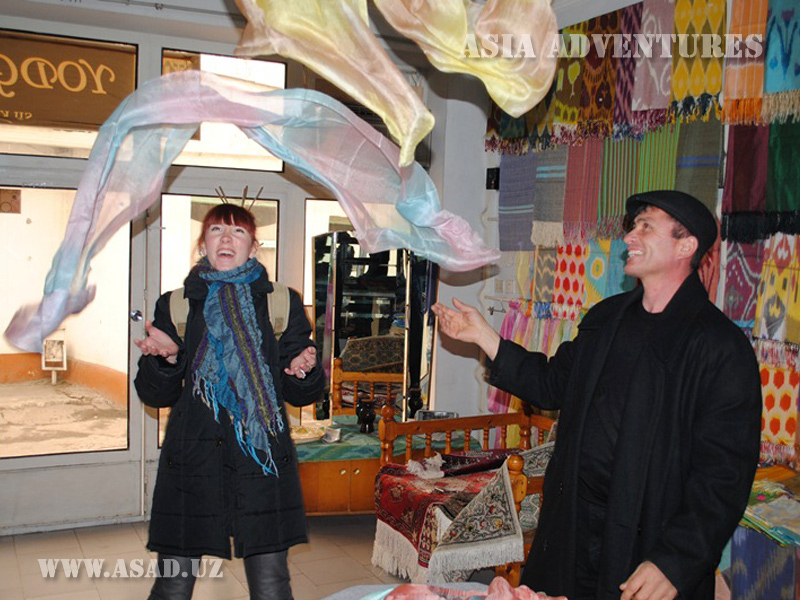 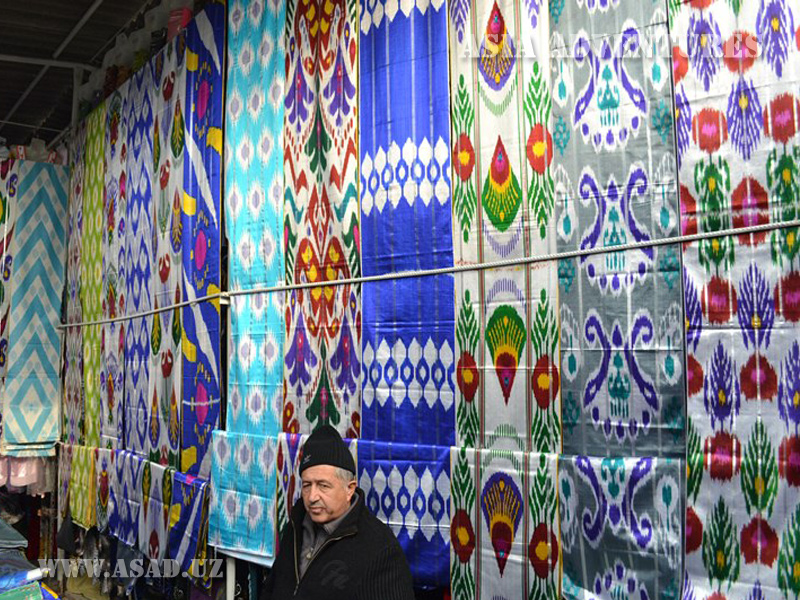 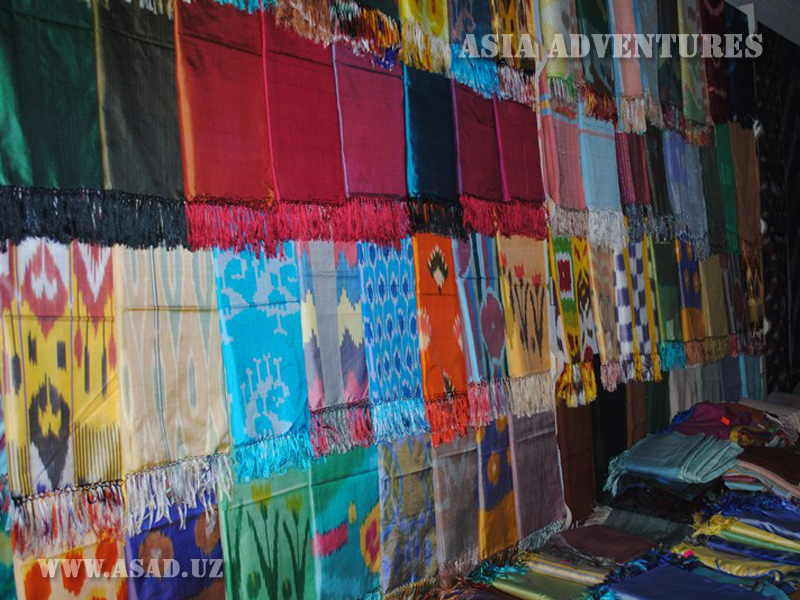 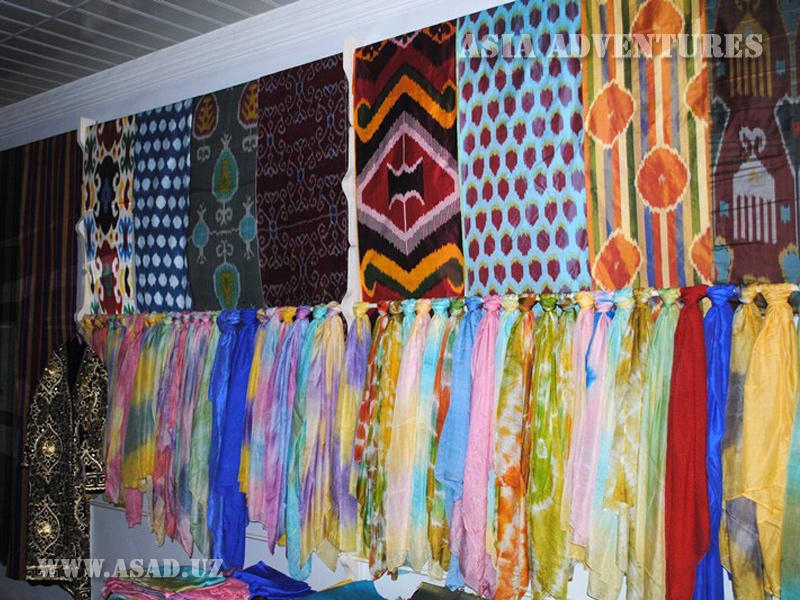 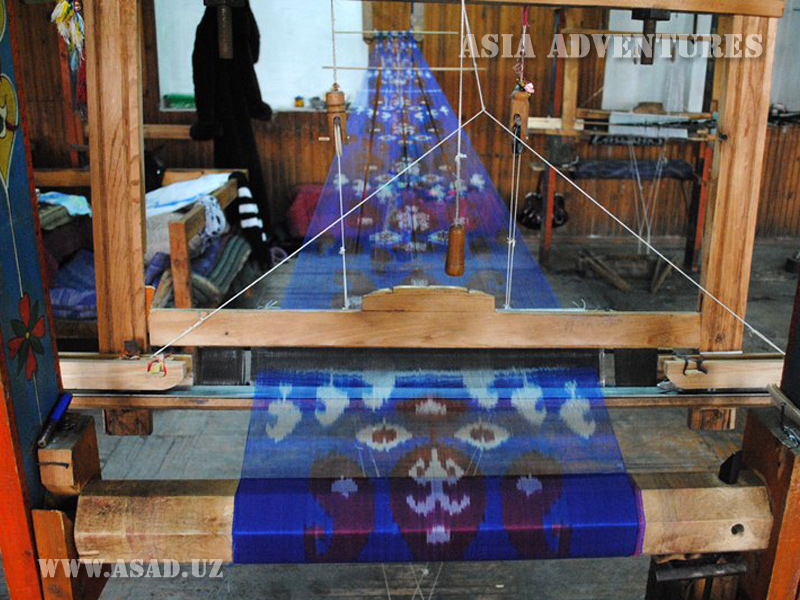 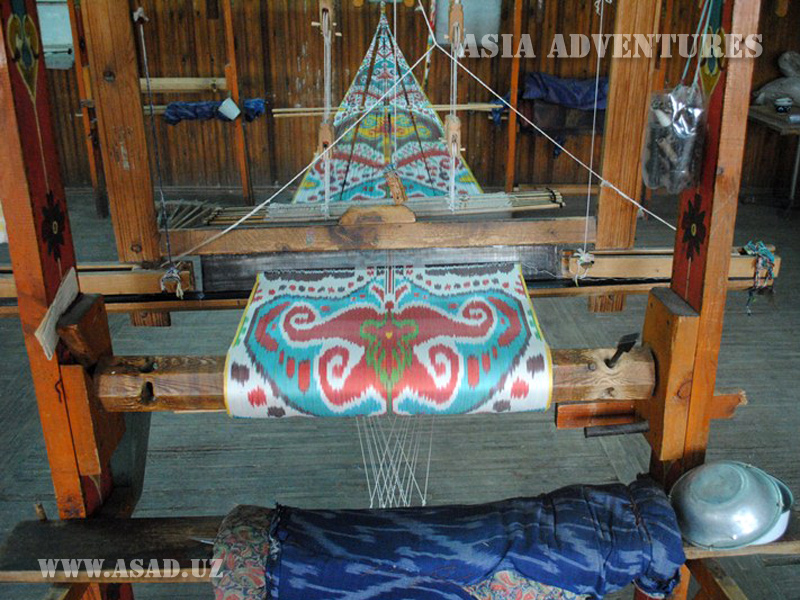 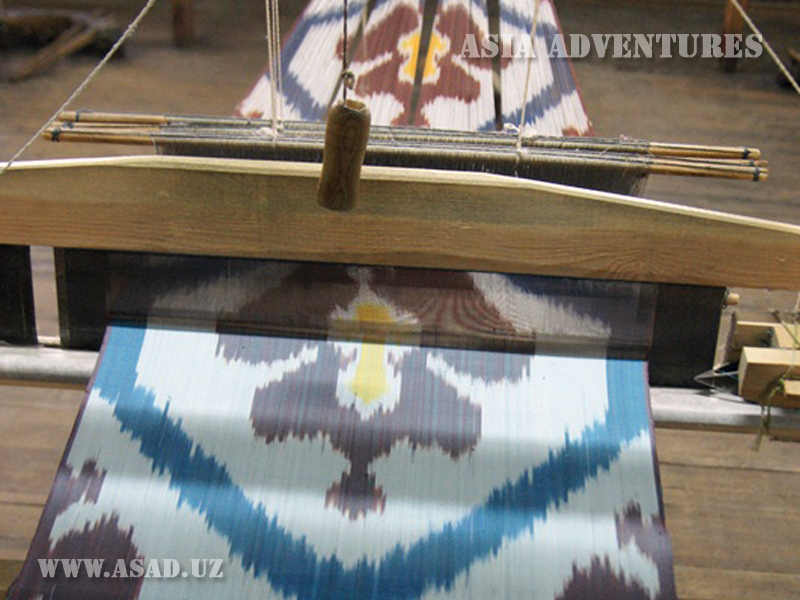 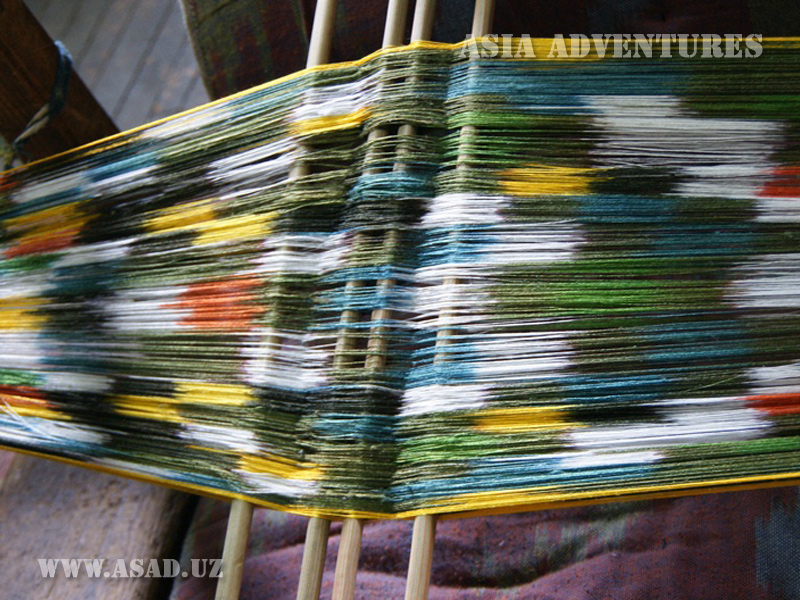