Dishan-Kala was built at the behest of Allakuli Khan in the middle of the XIX century. The length of the fortifications was about 6 kilometers, the height of the walls was about 8 meters, and the thickness in the most fortified places was 6 meters. The upper part of the wall was decorated with a scalloped railing with embrasures. In front of the wall the was a moat filled with water.more...


Unfortunately, unlike Ichan-Kala, only some fragments of walls, gates, and some buildings and architectural monuments have survived from Dishan-Kala to the present day: Nurulla - Bay Palace (1912), Sha-Kalandar-Bobo Complex consisting of a one-story madrassah and a minaret 18 m high (late XIX century), hospital (early XX century).

All that remains of the fortress wall are the gates: Kosh-Darvaza, Gandimyan-Darvaza and Khazarasp-Darvaza, although there were ten gates at the beginning.

The Northern gates “Kosh Darvoza” were built in 1912 and consists of three narrow cylindrical towers connected by arched passages with crenellated railings. The main facade of the gate is decorated with mosaics, and small domes with azure tiles.

Khazarasp-Darvaza was built in the middle of the XIX century in the form of two wide observation towers, between which there is a large arched passage with railings decorated with teeth.

Gandimyan-Darvaza was built in 1842, but then demolished and restored according to old drawings in 1970. The gate has two narrow cylindrical towers with an arched passage, above which is a gallery with finials in the form of teeth. The domes of the towers are decorated with blue tiles.

But the clay for the construction of the wall and gate was taken in the town of Govuk-Kul a couple of kilometers from the city, where today a small lake was formed, and the clay still attracts local potters. This place with the lake is considered sacred. 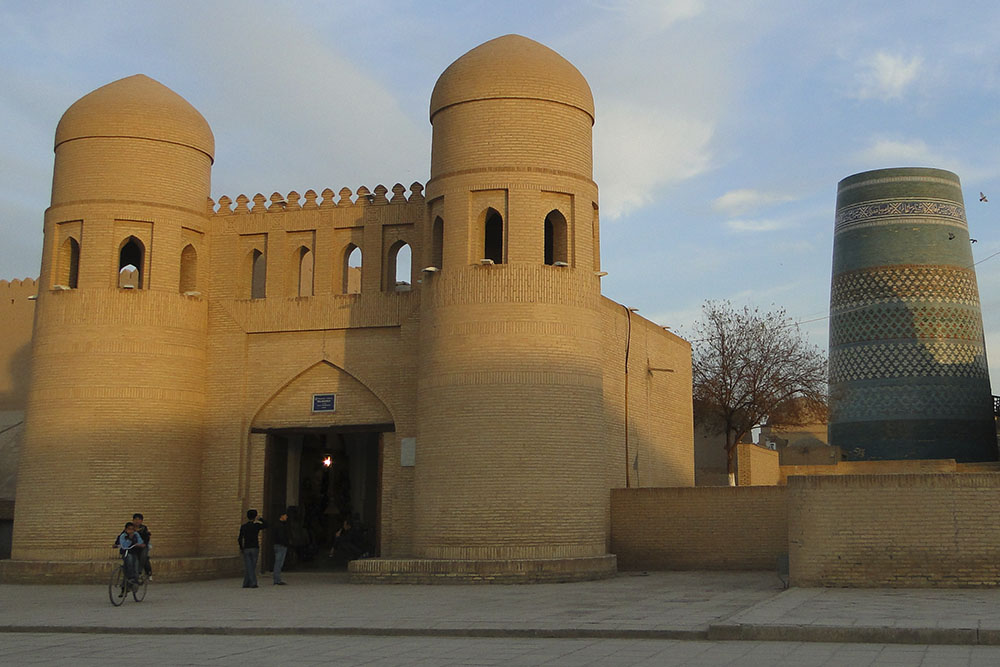