The Nurata National Reserve is situated in the central part of the Nuratau Range. The reserve’s area is 17,752 ha. The Nurata Reserve was established in 1975 with the purpose of conserving the population of a rare endemic subspecies of Severtsov’s urial (Ovis ammon severtzovi) included in the Red Book of IUCN and the Red Book of Uzbekistan. The other goal of the reserve is to preserve the genetic variety of the walnut and other cultivated types of fruit, as the territory of the Nurata Reserve was acknowledged as one of the centres of plant cultivation in Central Asia.

The Nuratau Range consists of two parallel mountain chains stretching for 250 km along the right bank of the Zeravshan River. The northern slopes of the range face the Kyzylkum Desert. The Nuratau Range is a complex system of relatively low mountains, which formed in the Proterozoic aeon and are one of the oldest mountain systems in Central Asia. The highest point of the range, Khayat-Bashi peak (2,169 m), is situated in the territory of the reserve.

The reserve features a continental climate, with dry and warm weather predominating throughout the year. The Nuratau Mountains are bordered by the Kyzylkum desert, which influences the local climate making it highly arid. The relatively low elevation of the Nuratau Range does not prevent humid air masses bringing precipitation into Central Asia from passing over it. However, numerous springs and watercourses in the mountains make the climate of the area different from the surrounding desert, as even in the hottest summers the air remains relatively cool. On the contrary, in winter cold air often descends to the foothills and desert, while the weather in the mountains remains warm and sunny. The average annual temperature in the lower part of the reserve is 15-20 °C, with an average temperature of 1-8 °C in January. The winter in the region is moderately cold, with alternating snowfalls and frosts and long periods of thaw and rainy and windy weather. The minimal temperature that has been recorded is –32 °C. Most of the precipitation falls in winter and spring. The average annual precipitation is 400 mm. The spring is short, warm and rainy, sometimes with a few frosty days and occasional snowfalls, however. The summer is long, dry and hot, with an average temperature of 29.4 °C in July and a total solar radiation of 130-140 kcal/cm2.

The territory of the Nurata Reserve is cut by ten watercourses of various sizes carrying their clean and transparent waters towards Lake Aydar. Most of the rivers and brooks flowing from the Nuratau Mountains are seasonal, and only a few running from the southwestern slopes of the range are big enough to reach the Akdarya, one of the Zeravshan’s branches. The central part of the Nuratau Range features numerous springs active only in spring.

The Nurata Range boasts original flora, which has formed thanks to the transitional situation of the region, between the Pamir-Alay and Tien Shan mountain systems and the desert plains of Turan, and which includes plant species characteristic both of mountain and desert regions, as well as a lot of endemic species and relicts. The plant world of the Nuratau Range consists of 814 species of vascular plants, which belong to 78 families. The local flora is dominated by plants of Mediterranean types. Currently, 29 of the plants of the Nuratau Range are included in the Red Book of Uzbekistan, among which are 3 species of the desert candle, 3 onions, 5 tulips, 5 locoweeds and others.

Numerous deep gorges are particularly rich in shrubs and trees. The horticultural activity the local people have been engaged in for many centuries has resulted in a unique type of landscape – artificial fruit tree forests. The dominant tree in the artificial forests is the walnut. Other fruit and fruitless trees constituting considerable portions of the forests are the apple, black and white mulberries, apricot, cherry, grapevine, pear, poplar, willow, elm, plane and, finally, biota, a very rare tree for the Central Asian region. A one-thousand-year-old biota, the largest one in the reserve reaching 8.5 m in circumference, grows in Mejerum, the longest river valley of the reserve.

The fauna of the Nurata Reserve is rich and diverse, including 34 mammal species, of which 3 are insectivores, 8 bats, 1 lagomorph, 13 rodents, 7 predators, and 2 paridigitates. The most common of the mountain species living there are the stone marten, Rattus turkestanicus, and Severtsov’s urial. The insectivores are represented by the eared hedgehog (on the foothills) and Brandt"s hedgehog (at medium elevations). The most distributed predators are Vulpes vulpes karagan and the stone marten. The wild cat may be encountered in the valleys, while the upper parts of the gorges feature the wolf. In the lower part of the mountains it is possible to meet the badger and steppe and mottled polecats. The wild boar living at all elevations, from the foothills to the upper parts, represents the ungulates. The rich plant world of the region is a favourable condition for the breeding of this species. Severtsov’s urial is the most interesting mammal species of the Nurata Reserve. Currently, the reserve contains 1,700-1,800 specimens of the animal, though it can hardly be found outside the reserve.

There is only one species of fish inhabiting the reserve - the marinka, which is widely distributed throughout Uzbekistan. Fazilman Lake is a home for green toads and lake frogs.

The reptiles are represented by 21 species, with 3 - the desert monitor, barred wolf snake and Central Asia cobra - included in the Red Book of Uzbekistan (2003). Other reptiles living at low altitudes include the steppe tortoise, steppe agama and Eremias velox. The sheltopusik, mountain racer, spotted desert racer, Coluber rhodorhachis, Schneider’s skink and the blunt-nosed viper are widely distributed throughout the reserve, while Cyrtopodion fedtschenkoi and Turkestan rock agama may easily be encountered among the rocks. The upper parts of the Nuratau Range feature the pit viper and Pallas" coluber. The Central Asia cobra and barred wolf snake are rare.

The Nurata Reserve lies on one of the routes of migratory birds. In autumn and spring the reserve rings with the multitude of birds. There have been recorded 196 bird species in the reserve, 103 of which build their nests in its territory. Nine of the birds encountered in the reserve are included in the Red Book of Uzbekistan. They are the black stork, black vulture, griffon vulture, saker falcon, golden eagle, serpent eagle, booted eagle, bearded vulture and houbara.

There are a number of significant objects in the territory of the Nurata Reserve and its neighbourhood. The most interesting of them are: 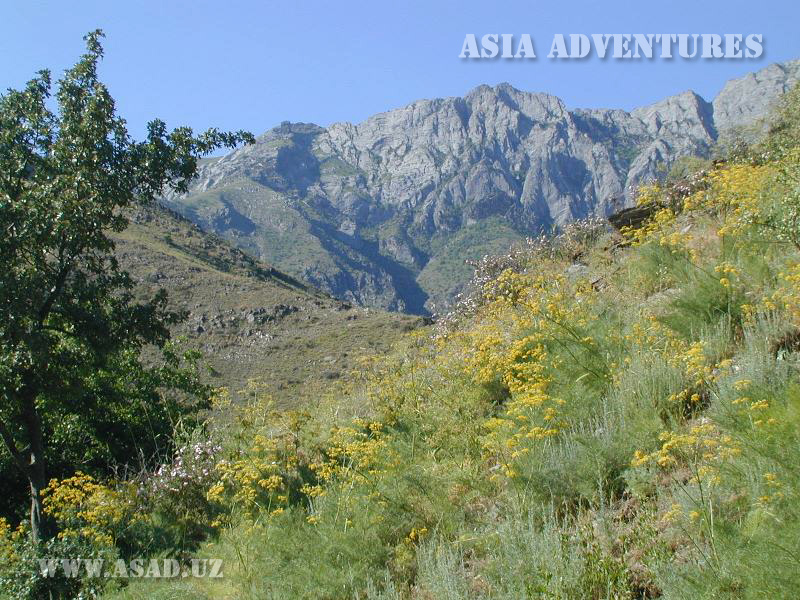 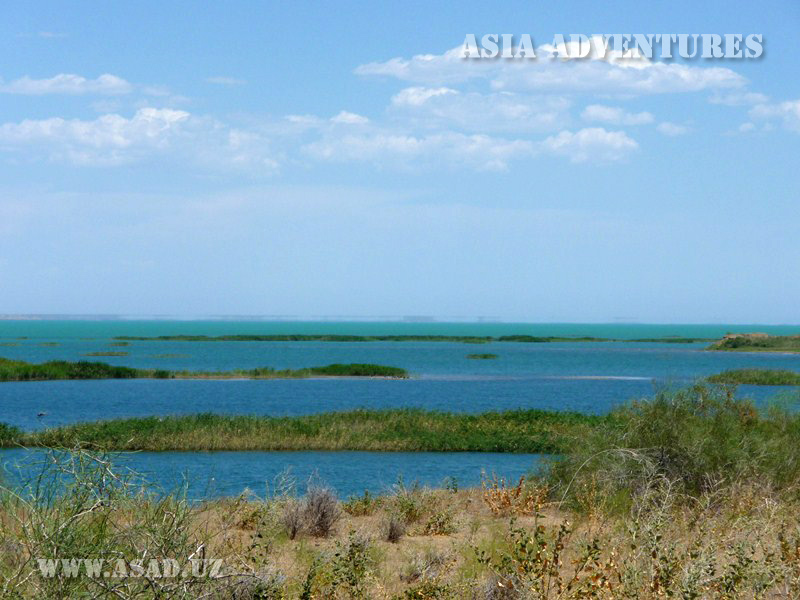 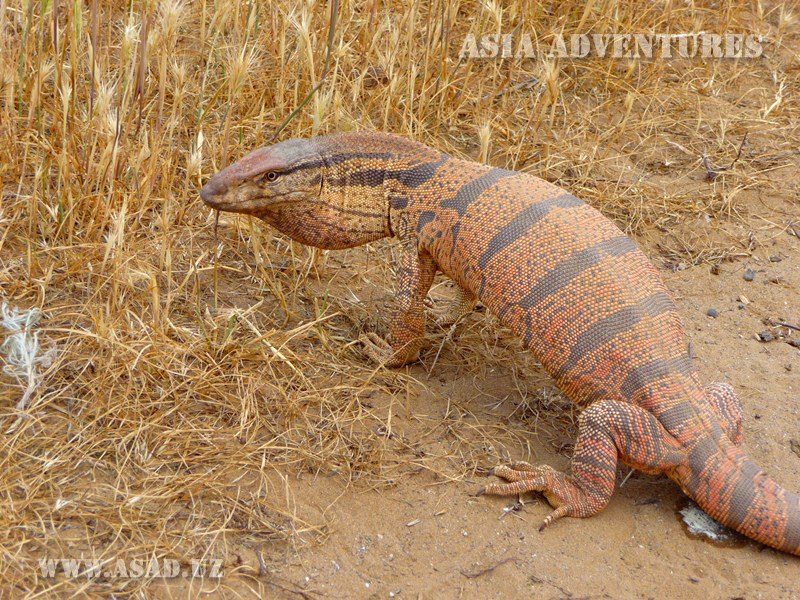 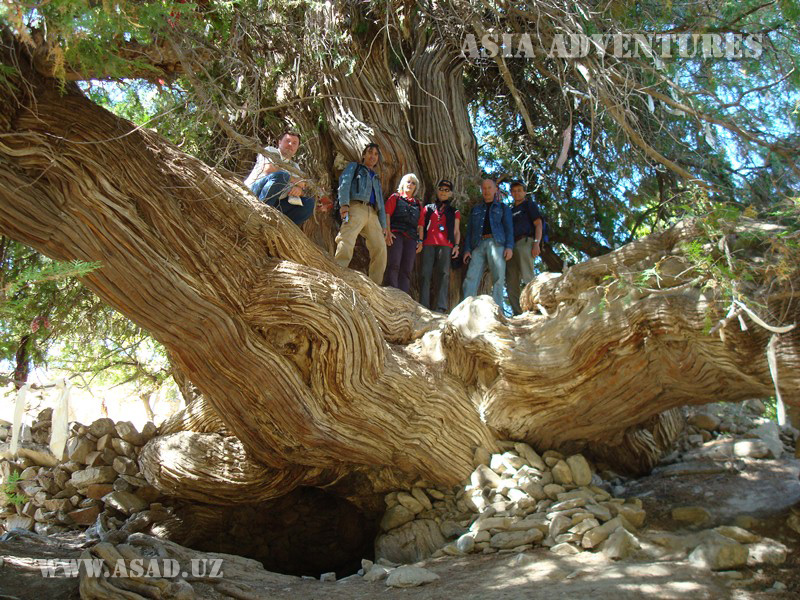 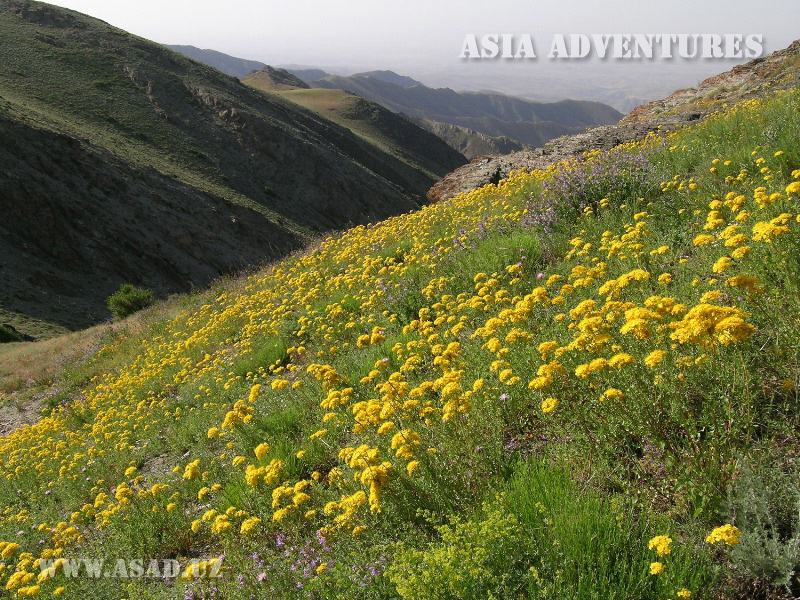 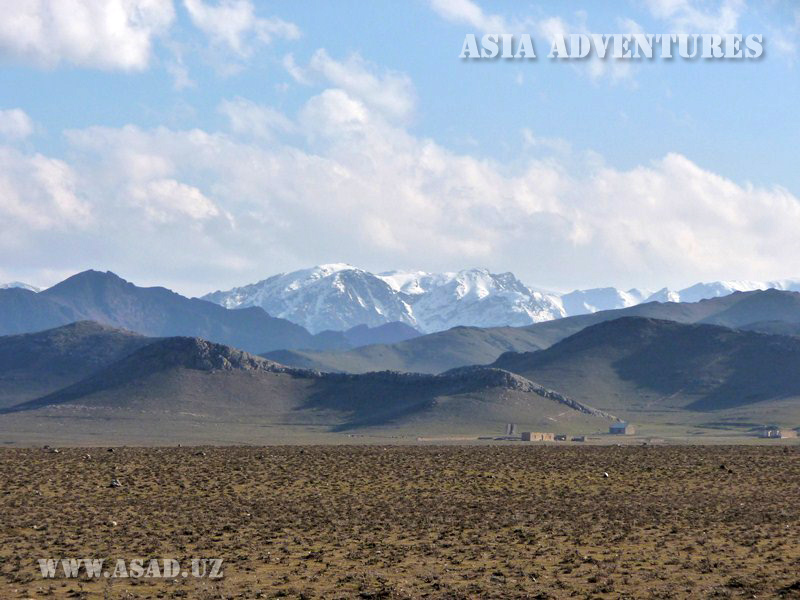 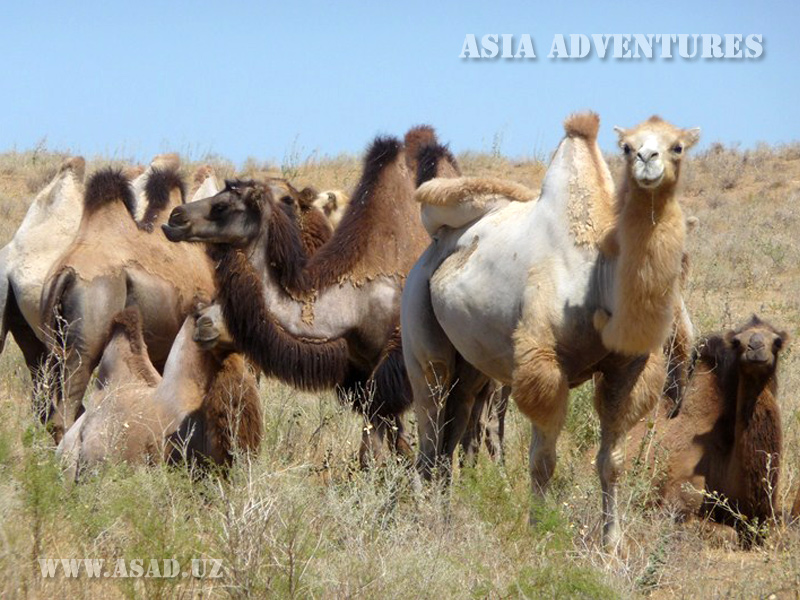 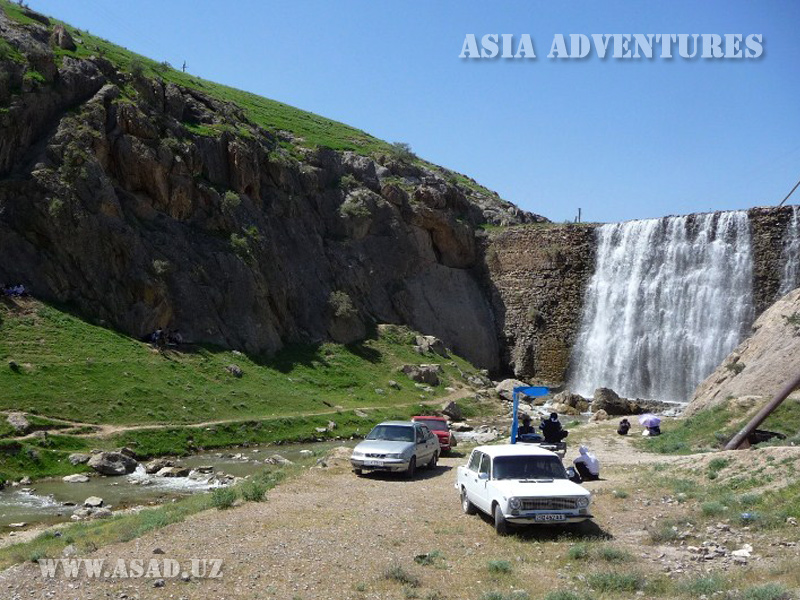 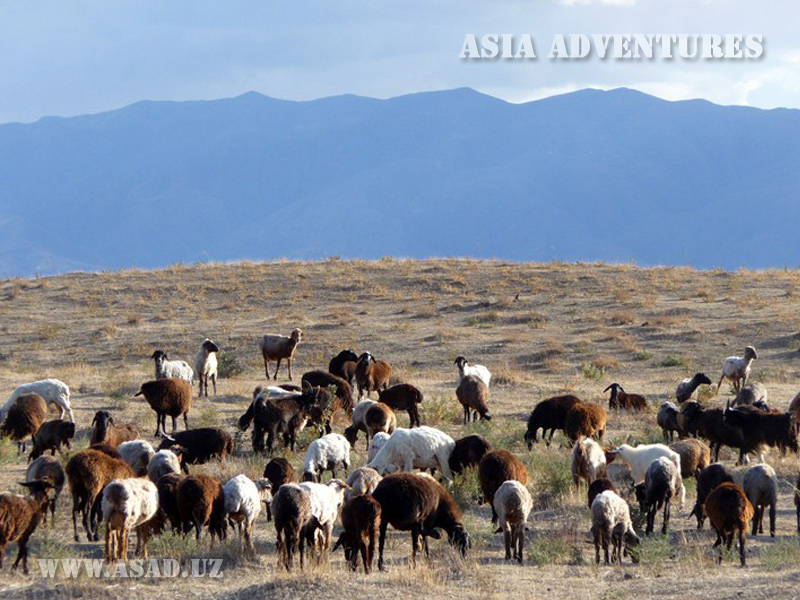 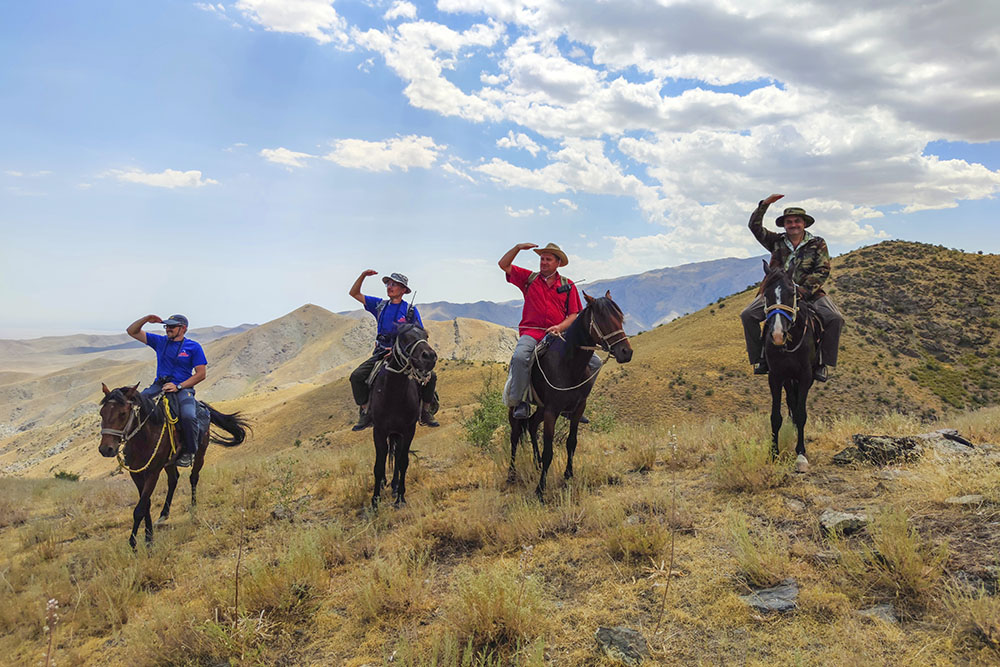 On horseback in the Nurata mountains 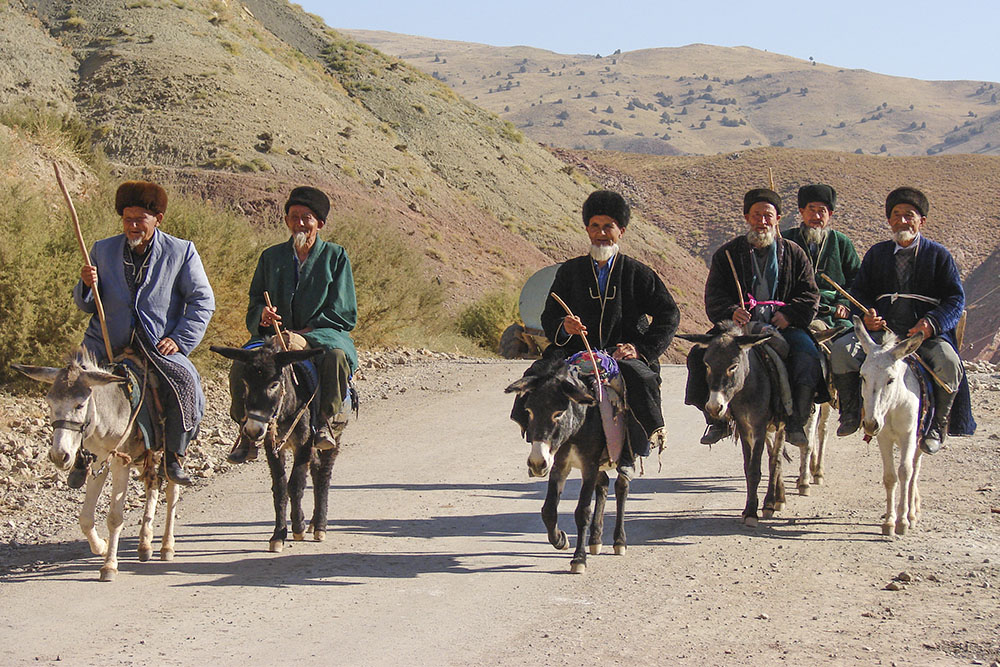