The Zeravshan National Reserve is situated in the southeastern part of Samarkand province, in Jambay and Bulungur districts. The reserve begins from the Pervomayskaya dam near the border with Tajikistan and stretches along the right bank of the Zeravshan River to the Chapan-Ata hills 8 km from Samarkand.

The Zeravshan National Reserve was established in 1975 with the purpose of conservation of riparian forests in the Zeravshan Valley. The reserve has the form of a narrow strip, from 300 to 1,500 km wide, stretching 47 km along the right bank of the river, with a total area of 2,352 ha.
more...


The climate of the reserve is subtropical continental, with strong daily and annual fluctuations in air temperature and humidity. The average temperature in July, the hottest month of the year, is 27.4 °C, with a maximum of 41 °C. The coldest month is January, with average and maximal temperatures of –0.9 °C and –27 °C respectively. Average annual precipitation rarely exceeds 400 mm. The summer is characterised by a very small amount of rain and very low air humidity. The number of days when the temperature does not fall below 0 °C is 209. In winter and summer wind usually blows from the east, while in spring and autumn – from the southeast.

The reserve’s river network consists of the Zeravshan and its tributaries. The average annual flow of the Zeravshan River before the Pervomayskaya dam is 165 m3/sec. As it receives most of its water from mountain glaciers, the highest water level is in the summer months of July and August, and the lowest in January and February. As much of the river’s water is diverted for irrigational purposes, the water flows in the riverbed only in non-irrigation seasons and in the periods of the highest water level. Ground waters are the main source for plant life in the territory of the reserve. As they lie very close to the surface of the ground, a many-tier riparian forest with a rich animal world has formed in the territory of the reserve.

The whole territory of the reserve is covered with tugai, a riparian forest. The tugai plant complex comprises all the types of plant community – arborescent, shrubby and herbaceous. The tugai riparian forests are characterised by an ability to develop in specific conditions, which are high summer temperatures and much water. Most of the tugai plants have a well-developed root system and are accustomed to floods. The tugai riparian forest features 207 species of higher plants, which have been recorded for the whole period of the functioning of the reserve.

The Zeravshan Reserve is also a home for 88 species of insects and 26 species of mollusks, the latter divided into two classes – Gastropoda and Bivalvia. Two species of mollusks – Colletopterum cyreum sogdianum (Kobelt,1896) and Corbicula fluminalis (O.F.Muller,1774) are included in the Red Book of Uzbekistan. The Zeravshan River and numerous canals are inhabited by 18 species of fish, with two, Barbus capito conocephalus and Sabanejewia aurata aralensis, included in the Red Book of Uzbekistan. Two amphibians live in the territory of the reserve: the lake frog (Rana ridibunda) found throughout and the green toad (Bufo viridis), which is less common. The reptile fauna consists of 10 species, the most common of which are Ablepharus brandti Strauch, Eremias velox, Natrix tesselata and Pallas’ coluber (Elaphe dione). The steppe tortoise (Agrionemys horsfieldi) and sheltopusik (Ophisaurus apodus) are less numerous.

Mammals are represented by 24 species in the territory of the Zeravshan Reserve, among which are the tamarisk gerbil (Meriones tamariscinus), Erinaceus auritus, tolai hare (Lepus tolai), jackal (Canis aureus), fox (Vulpes vulpes), porcupine (Hystrix leucura), badger (Meles meles), Felis libyca and muskrat (Ondatra zibethica). In November 2005 a wild boar was encountered in the reserve. The animal is supposed to have come from the Zeravshan Range, from a territory adjoining Tajikistan. Since 1996 the programme ‘Restoration and Conservation of the Bactrian Deer Population’ has been carried out in the reserve. The programme is financed by the National Centre for Scientific Research (France), the International Association for the Promotion of Co-operation with Scientists (INTAS), the MacArthur Foundation, the Logistics Health Incorporated and the World Wildlife Fund (WWF). 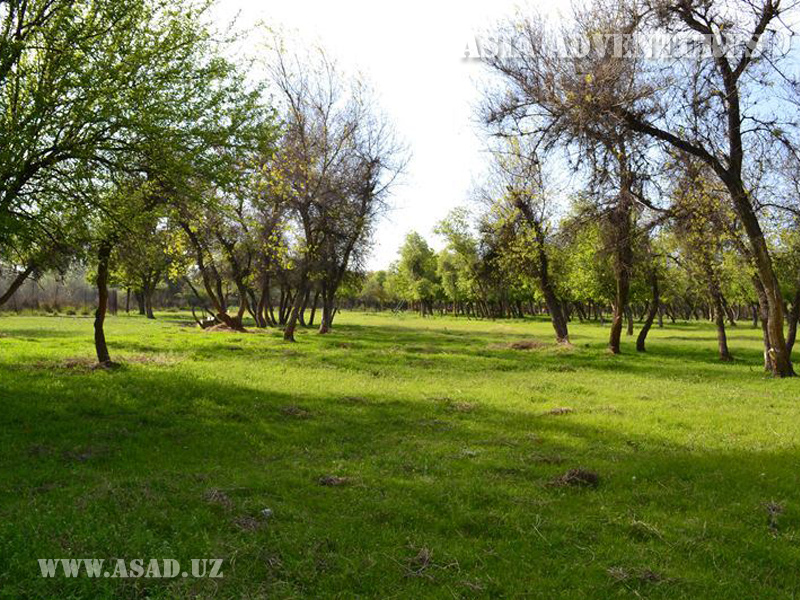 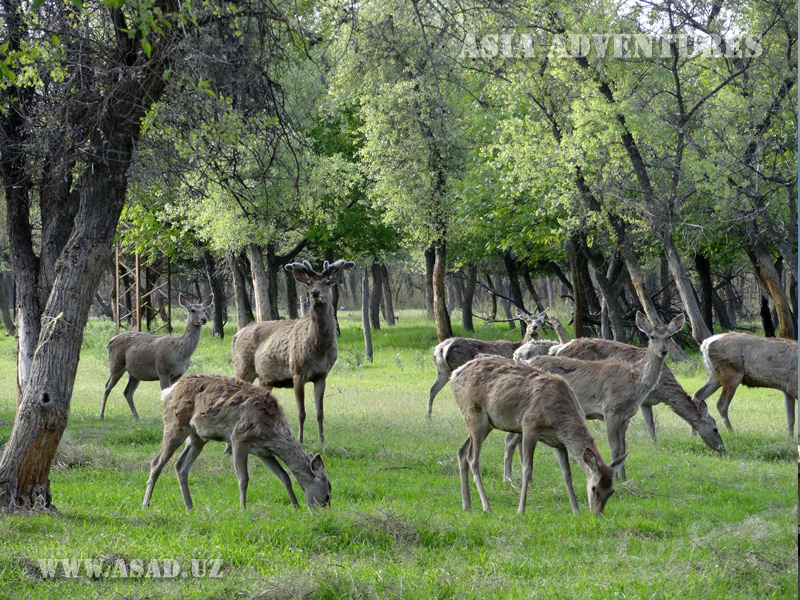 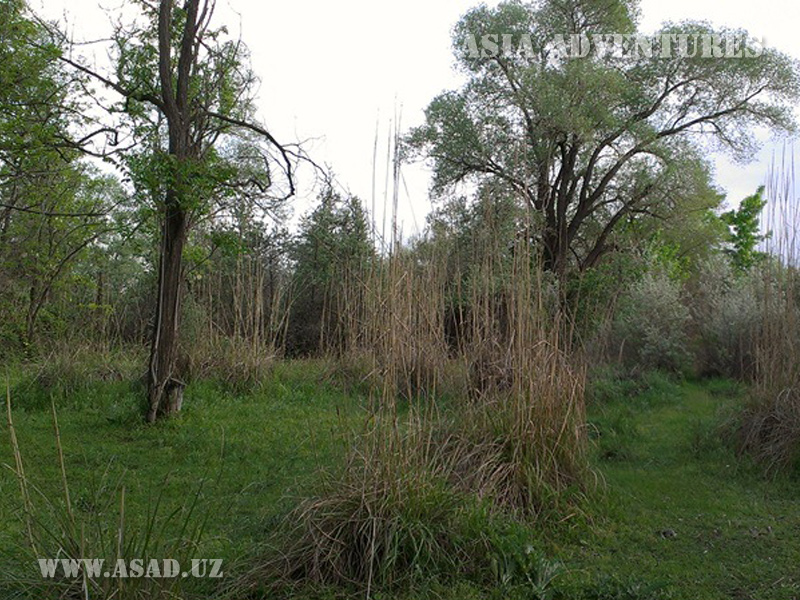 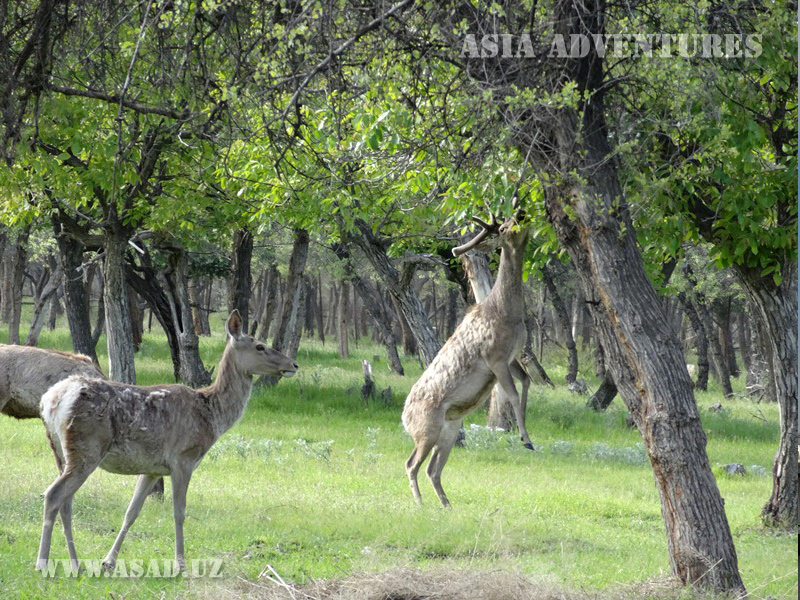 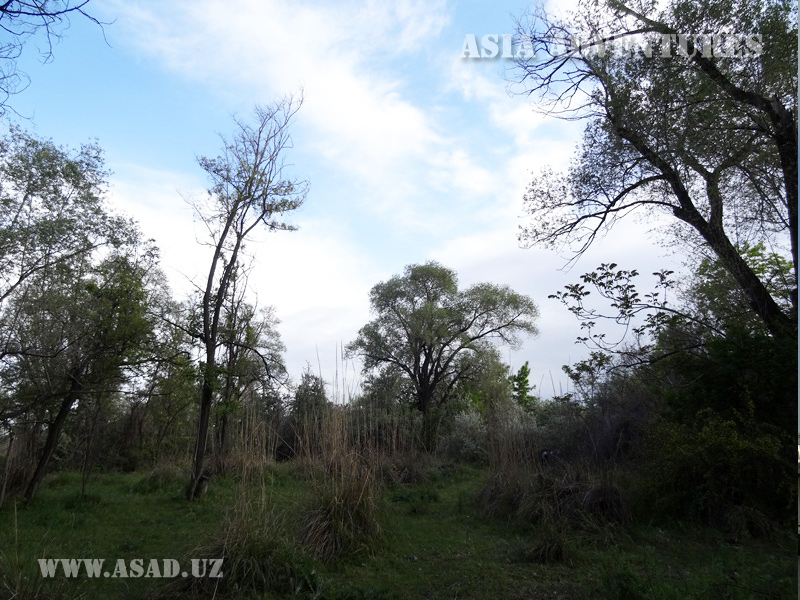 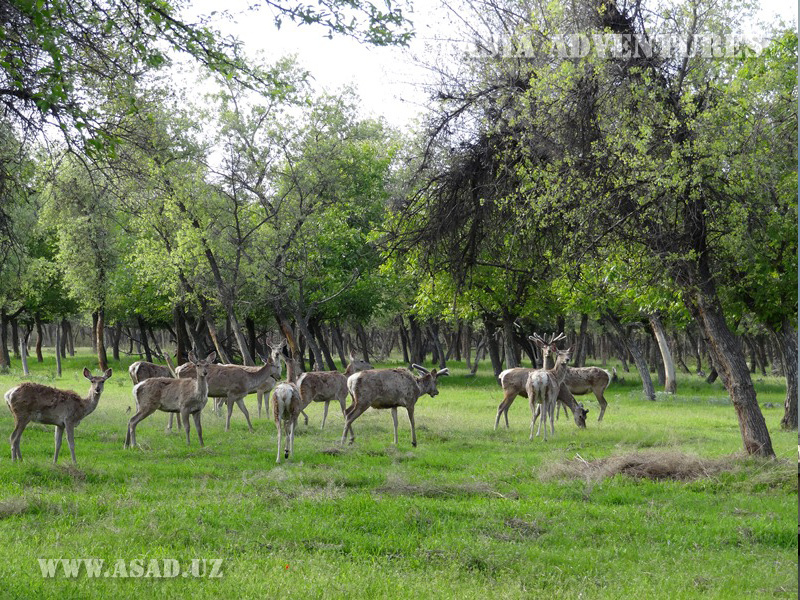 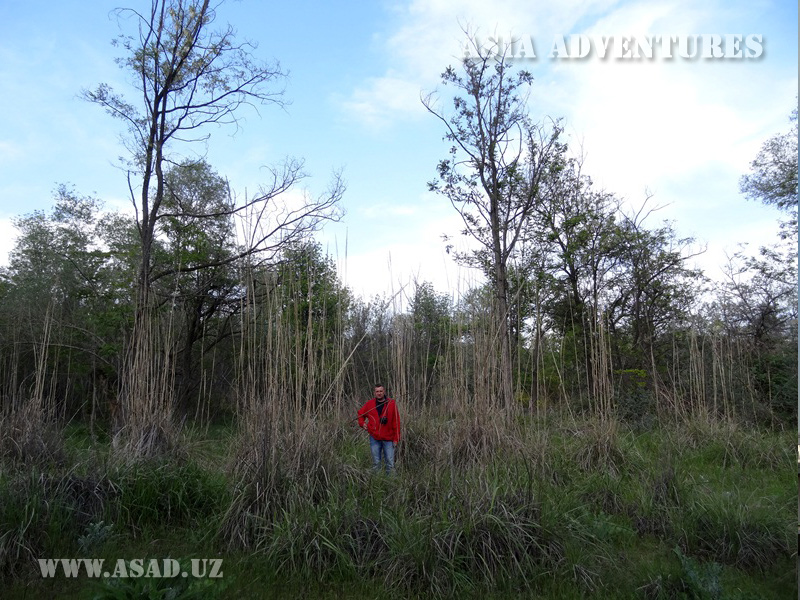 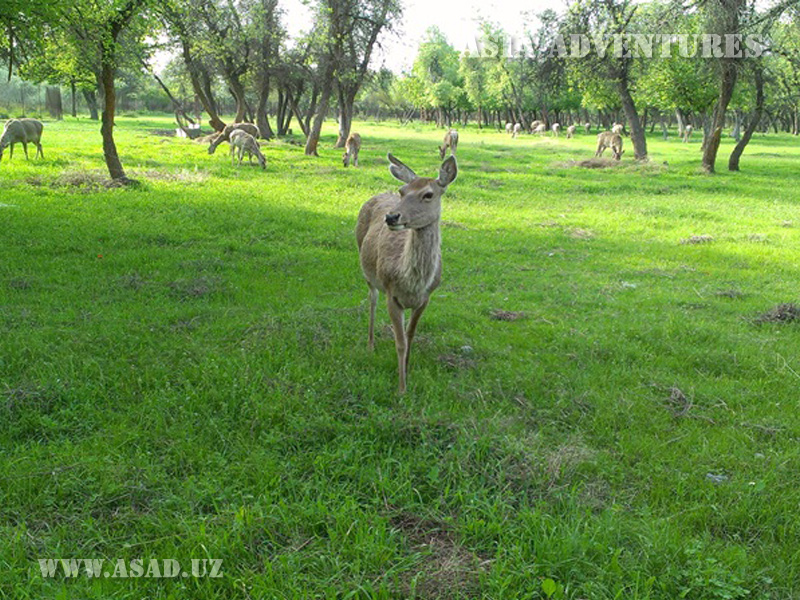 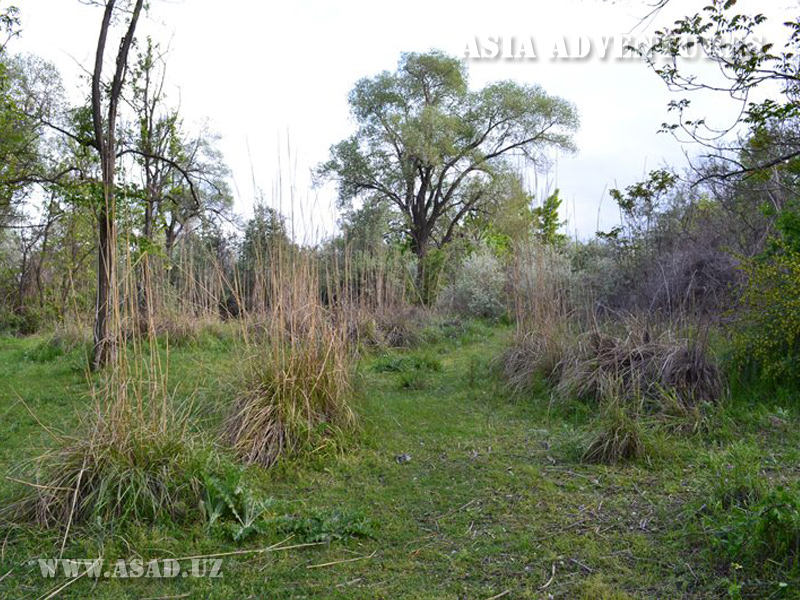 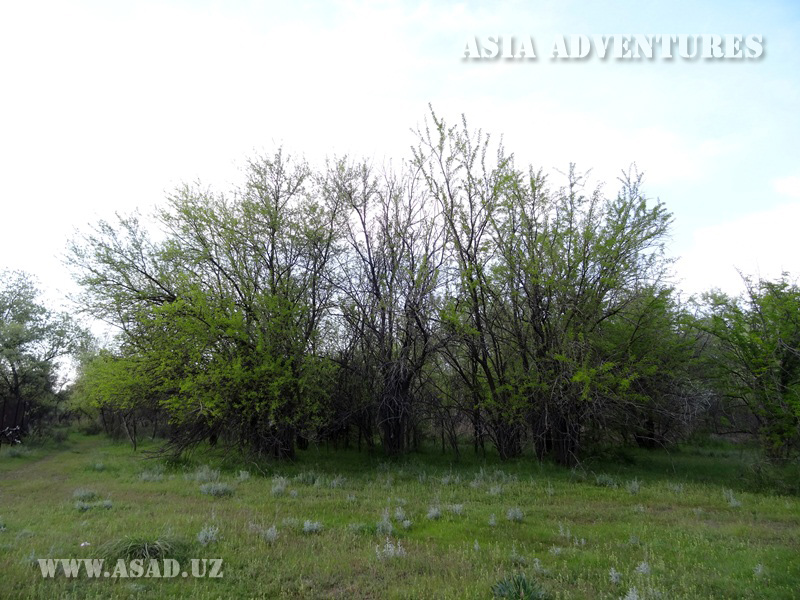 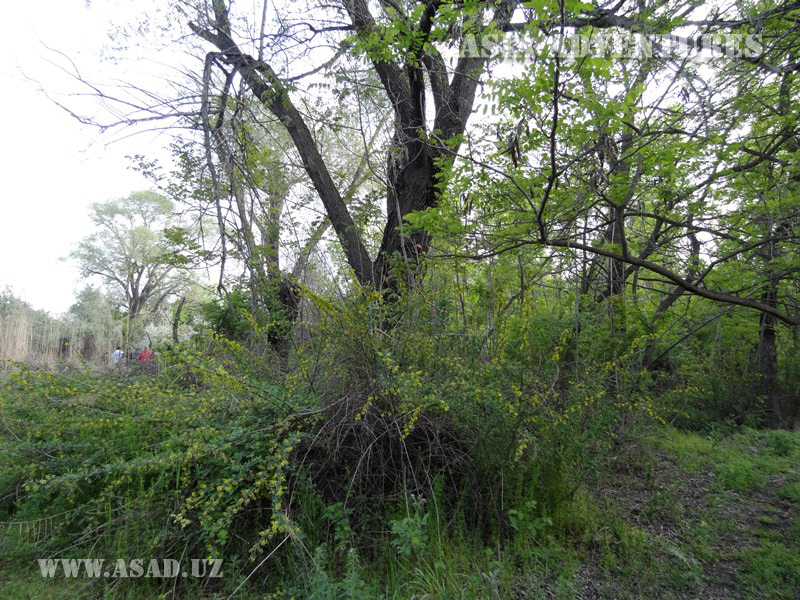