Ulak-kupkari is one of the most ancient equestrian games popular among the peoples of Central Asia. From the emotional aspect this highly spectacular performance can be compared with the Spanish bullfighting. Traditionally, ulak-kupkari is held at holidays, weddings, in spring, before the opening of the farming season, and in autumn, after the harvest has been reaped. In the course of time this game has grown into a popular sport with its own rules, clubs, federations and competitions.

Literally ‘ulak-kupkari’ translates as ‘the goat is a business for many’. Horsemen struggle for a carcass of a goat, which in the end must be thrown into a ‘kazan’, a round construction of bricks, concrete or large tyres. Teams consisting of 6 persons compete with each other; however, in some cases several hundreds horsemen simultaneously take part in the competition to gain an individual prize.

The ‘ulak’ (headless carcass of a goat) is prepared beforehand. The carcass usually weighs 30-40 kg, but on a rainy day, when mud sticks to the goat’s fur, its weight may reach 80 kg.

A portion of a field is marked out for the competition, where two kazans are constructed on the opposite sides of the pitch, with the carcass of a goat placed right in the middle. Upon the referee’s signal the participants gallop to the carcass lying on the ground and gather around it. The first thing they are to do is to pick up the carcass and hold it by pressing with the leg to the side of the horse, and then to gallop to the kazan of the opposing team and throw the carcass there. However, it is not so easy to do. The ulak is heavy and it is not so simple a task to lift it up from the ground. The teams do not hurry to do it, waiting for their opponents to do it, as it is much easier to take the carcass away from someone than to pick it up. It is next to impossible for a horseman with the ulak in the hands to dodge from the opponents with his own efforts. So the other members of his team help him do it. Using their horses they try to keep the contestants of the opposing side off their mate, so that he can break through the circle of horsemen and rush to the kazan at the edge of the pitch. Not always the same participant who has picked up the carcass throws it into the kazan. It requires a lot of strength, as the kazan is rather high and has inward-going walls, like those of a jug. Therefore, it is highly important to carefully plan tactics for the game.

The preparation of the horses also plays a significant role in the ulak-kupkari. They do not only help their riders bring the ulak to the kazan, but also protect it from the opponents! The animals push each other and turn their sides to the opposing team’s horses, thus cutting them from their master and receiving the largest portion of the opponents’ attack. Besides, the horses bite each other and even the horsemen of the opposing team.

This game has strict rules concerning the outfit of the horses and their riders. Using any sharp metal objects, on either the stirrups or the harness, is prohibited. The people must put on soft cotton-wool trousers and jackets, high boots and helmets or fur hats. In addition, strips of thick cloth are wound around the shins of both the men and the horses.

So what does the winner get? What do the young men go out on the pitch for? The winner receives a valuable prize: it may be a camel, a horse, a bull, money and even cars, not to mention carpets, TV sets and other household articles. And, to be sure, the main reward is the reputation of the bravest and strongest man. 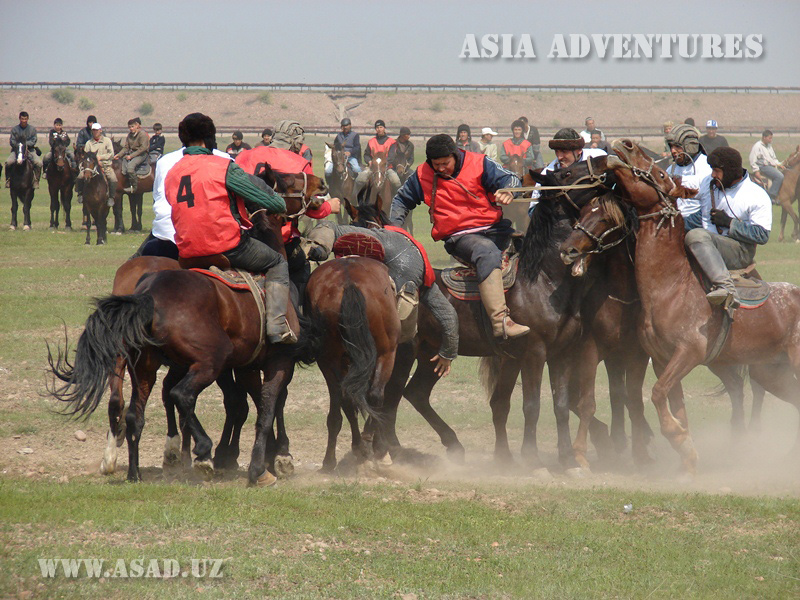 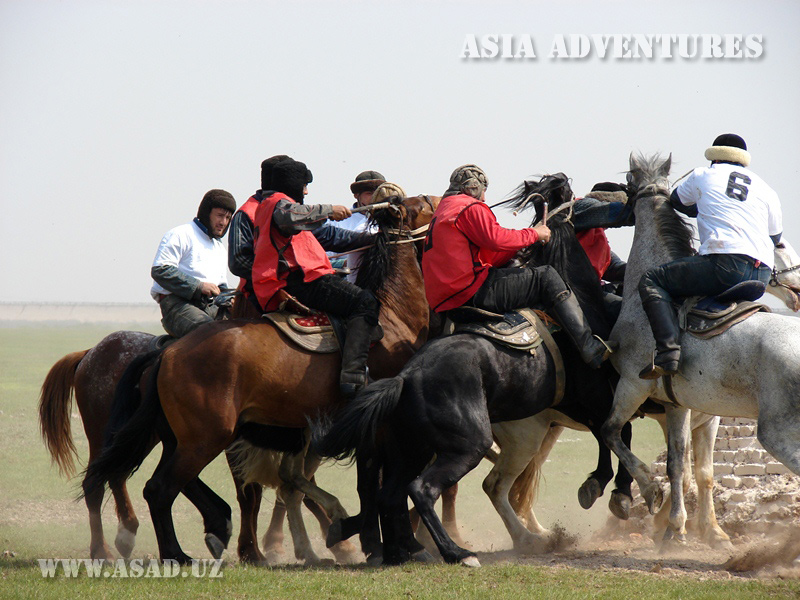 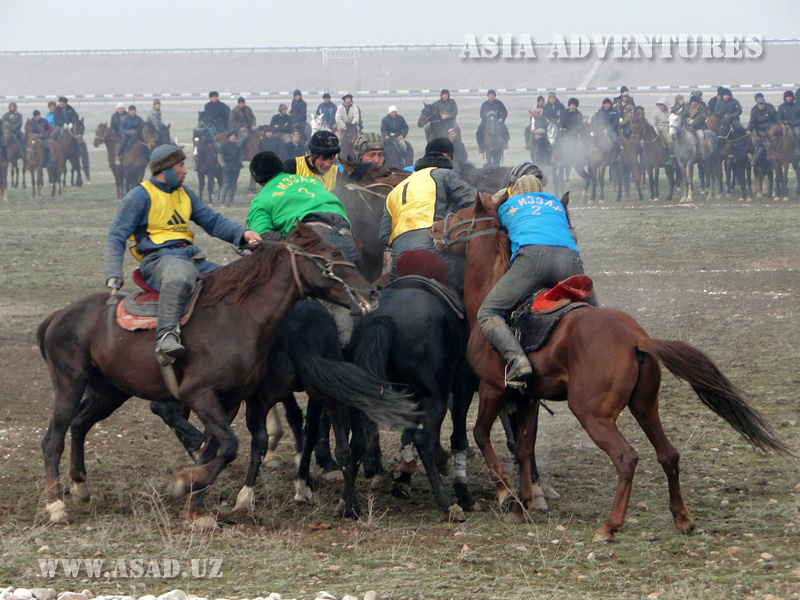 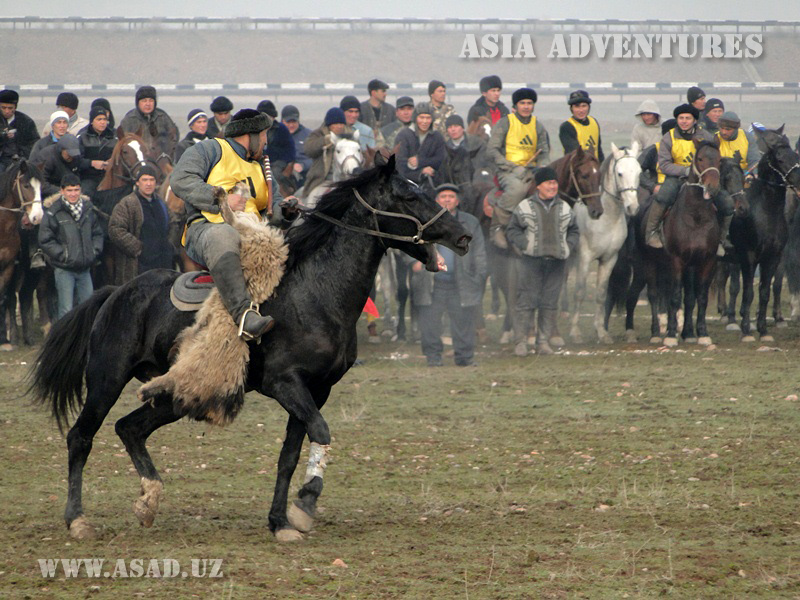 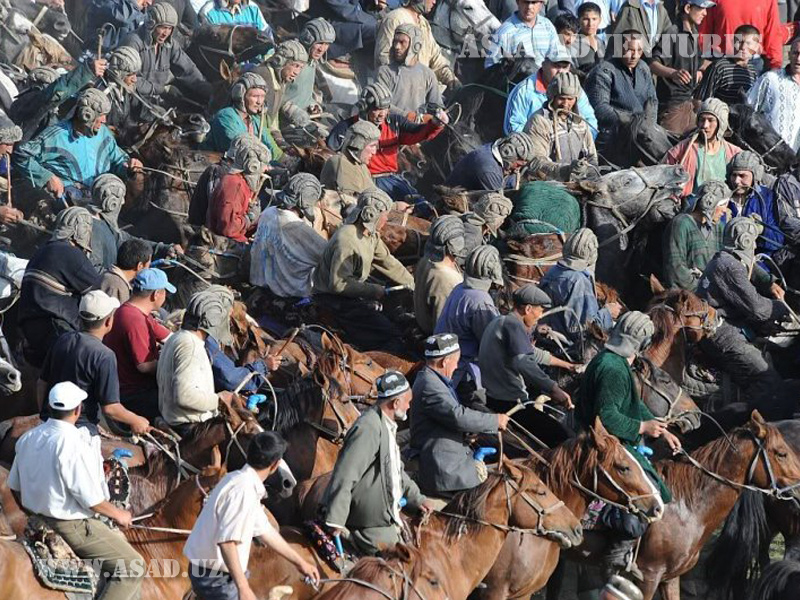 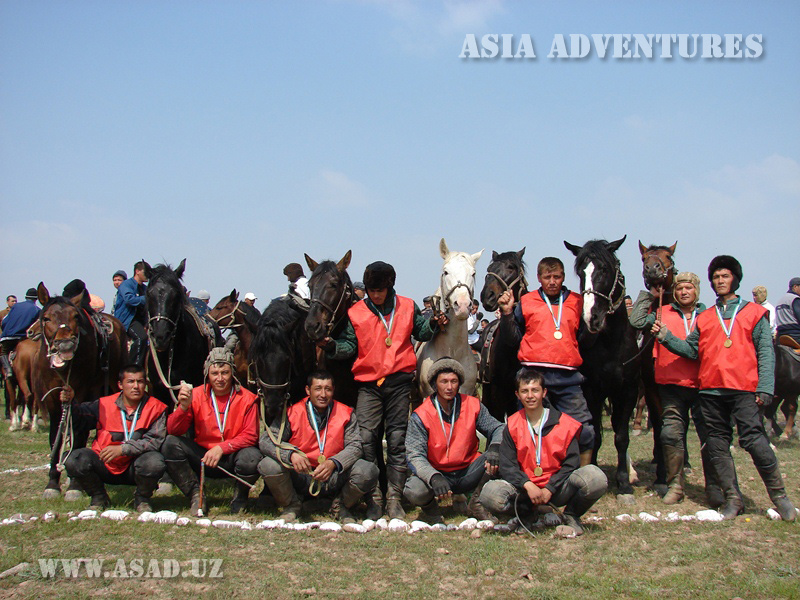 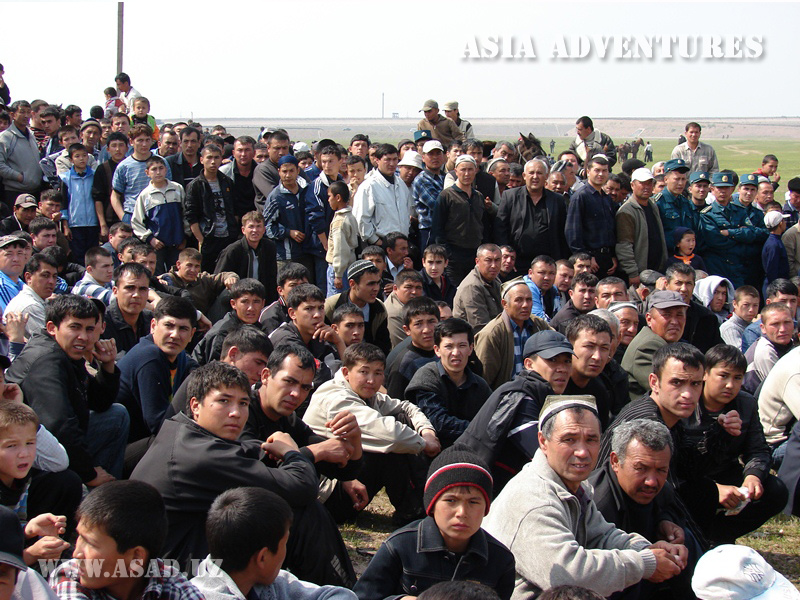