A fascinating adventurous bike tour takes you through the most interesting places in the central part of Uzbekistan. You will ride your "steel horse" through the Nurata Mountains, meet the locals of villages lost in the mountains, get acquainted with their exotic way of life and centuries-old traditions. You will see the stone monuments of Lyangar. And of course, visit the fabulous ancient-eastern cities of Samarkand and Bukhara with their world-famous mosques, madrasas, mausoleums, minarets, caravanserais. 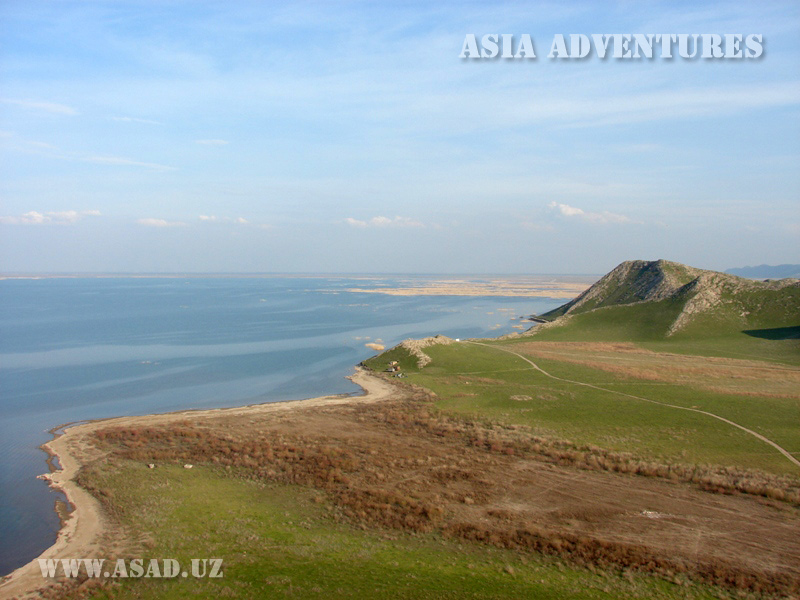 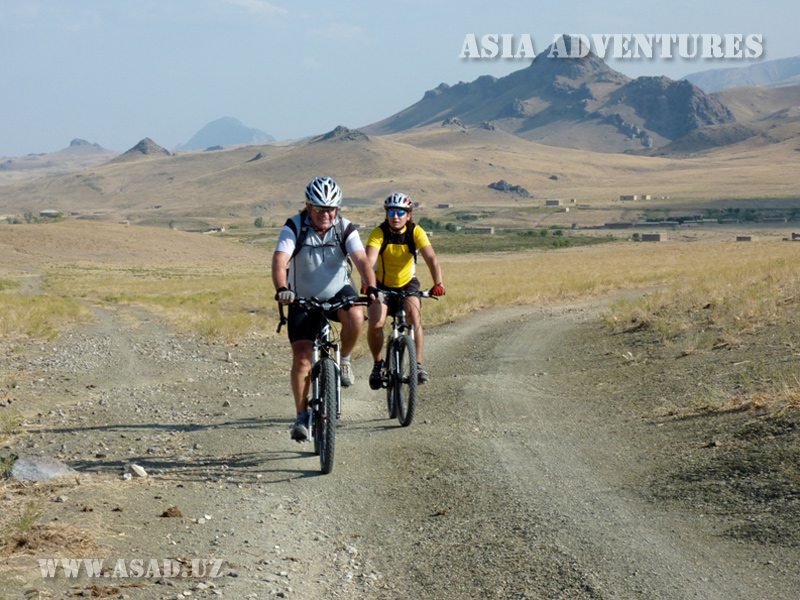 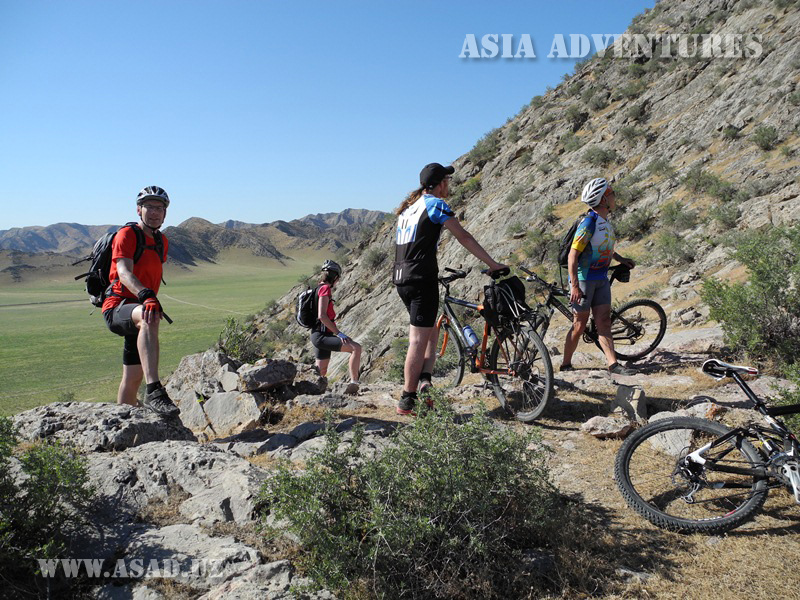 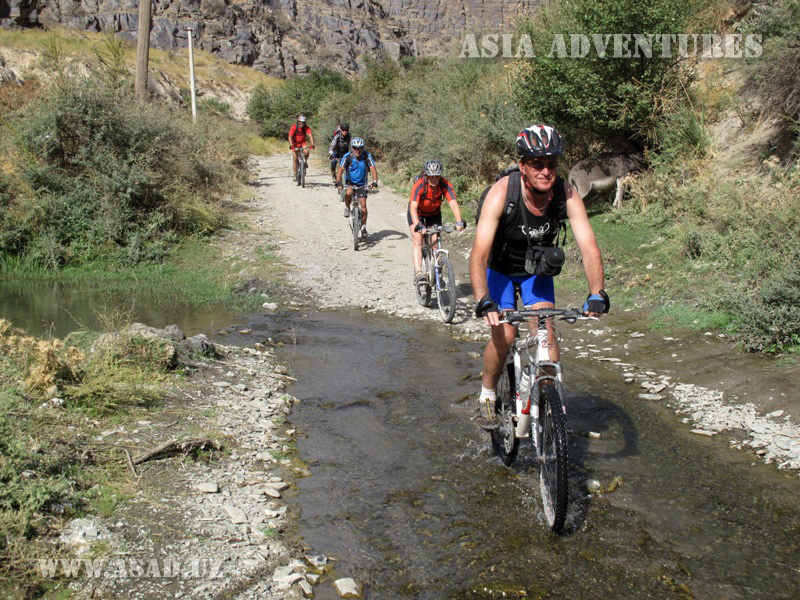 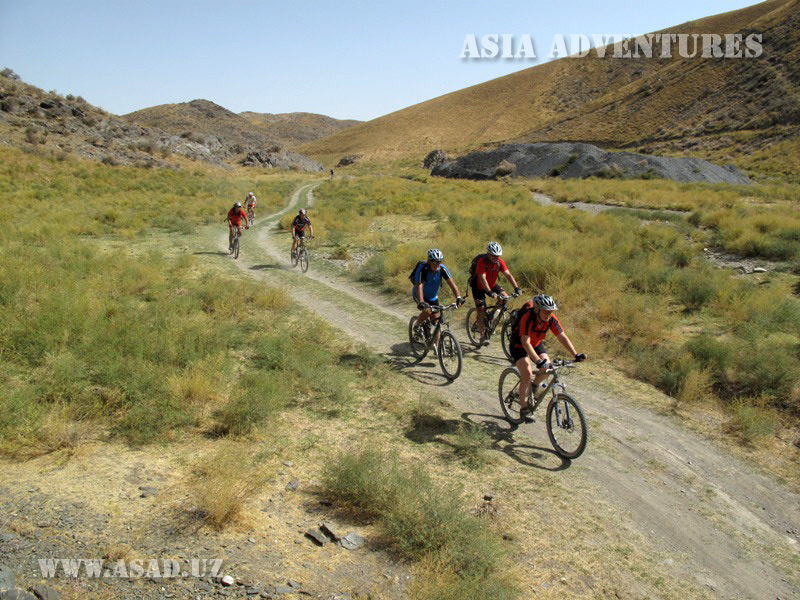 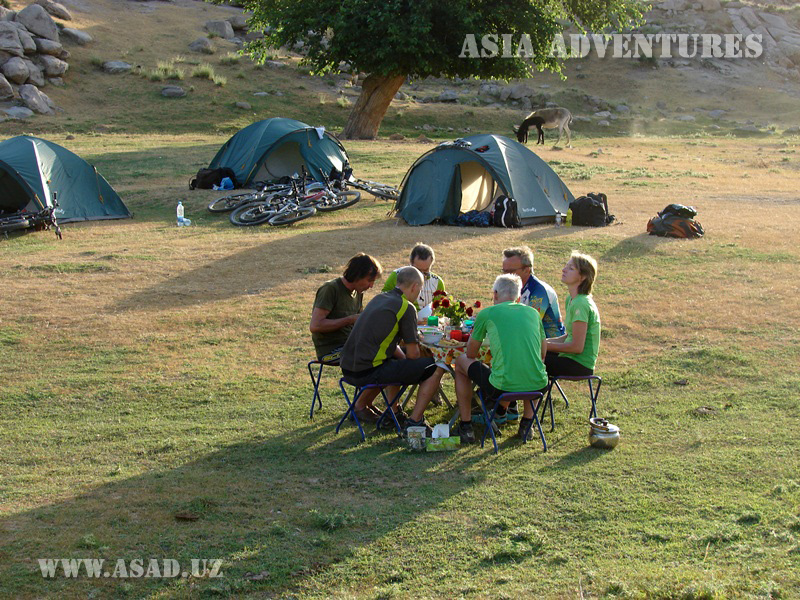 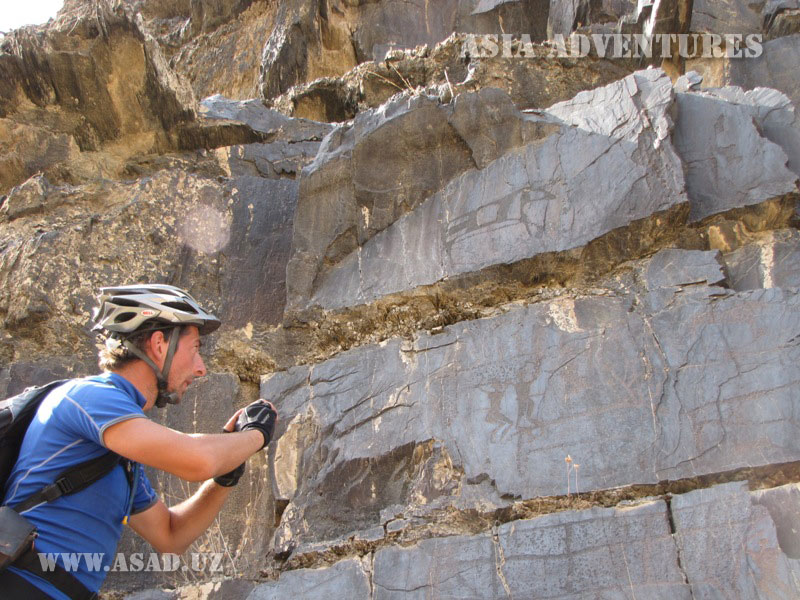 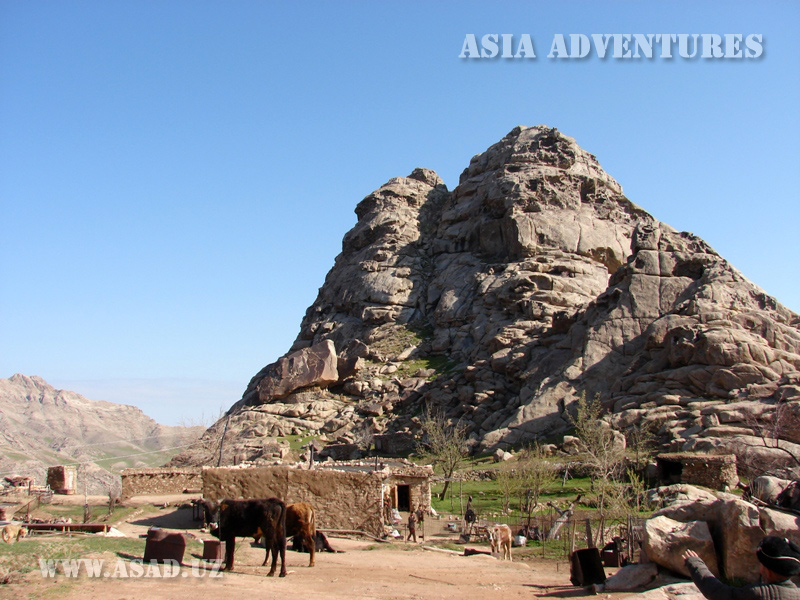 Arrival in Tashkent. Testing the bikes.

Upon arrival in Tashkent - meeting the group at the airport, transfer to the hotel. Rest. Free time for the rest of the day. Building bicycles or getting them for rent. Briefing with guide in the hotel lobby before dinner. Overnight at the hotel.
2

After breakfast transfer from Tashkent to the Pistalitau ridge (240 km, 4 hours) by bus. Lunch on the arrival. Preparing for the route. On this day, we start the bike route and slowly drive only 35 km (+523m, -126m ) through the picturesque hills in the Nurata Mountains. The road passes through a sparsely populated area, first asphalt, then a dirt road with a slight elevation difference. Overnight in a tent camp (680 m above sea level). In the evening, you can explore the surrounding area.

After breakfast, we will visit the popular pilgrimage site Bogbon-ata, it is a picturesque oasis in the Nuratau Mountains, covered with legends. Here, thousands of pilgrims come to the healing spring and the "magic" stone in the hope of healing and fulfilling their wishes. Then you will go for a bike ride through small exotic villages along the Ortacheku rocks - these rocks are whimsically shaped, reminiscent of dinosaur ridges. Overnight in a tent camp ( 920 m above sea level). In the evening, you can walk around the surrounding area and climb a small pass with a beautiful panorama (2 km, 1.5-2 hours).

Today, a simple but long bike route is planned, so an early start is preferable. The cycling part of this day begins with a long descent along a rural road along the Nuratau ridge to the district center of Bogdan. Lunch. Then a bike ride along the paved road to the village of Sob. During the day, tourists can observe the extensive panoramas of the Nuratau range and its surroundings. Overnight in a tent camp in the Sob gorge (700 m above sea level).

Today we leave the gorge and bike up the rocky road through the pass under the majestic Gaucum Peak (1516 m above sea level). During the ascent, tourists can see the picturesque views of the village of Sentyabsay, the peaks of the Nuratau range and the long shores of the lake Aydarkul. After a steep descent from the pass, the trail will take us to the vast southern slopes of the Nuratau range. Then we will go up to the lake Fazilman (1640 meters in length). Here tourists can relax, have lunch and then go to the area of the village Aktash. Overnight in tents near the village Aktash (1010 m above sea level).

Today we go by bikes to the Kingdom of giant rocks along an interesting dirt road between huge boulders, transformed by water and wind into prehistoric sculptures lying on green mountain fields. In the valley, behind huge stones, there are picturesque houses, the inhabitants of which live a peaceful life. After lunch, we will continue our bike ride along the dirt road, cross the valley, and head to the Aktau ridge. Overnight in tents at the picturesque cliffs under Mount Talizar (990 m above sea level).

Today we ride bicycles towards the Lyangar pass - to the marble quarry. We will have time to explore the local sights. From above, a beautiful panorama of the mountains, the valley and the unusual peak Talizar opens up, on top of which you can see the ruins of an ancient fortress of the Timurid era of the 15th-16th centuries. We continue the cycle tour along the upper part of the Aktau ridge, descend into the valley to the village of Maidan. On this part of the cycling route, tourists can enjoy the cool breeze while we ride through the gorge of the Maidansay River, with numerous fords across a small river. Overnight in tents on the river bank in Maidansay gorge (740 m above sea level).

Today we will drive along the southern slopes of the Aktau ridge, from here the road rises through small settlements to the plateau. From the upper part of the route, you can see a vast panorama of the Zeravshan River valley in the south, and in the north you can see the white steep cliffs of Khanaka-above them, in good weather, you can see numerous mountain eagles. Then the road descends steeply into a picturesque and exotic mountain valley, buried in the dense greenery of the surrounding trees - we will drive along a mountain river with shallow fords to the village of Chinar. Overnight in tents on the river bank (670 m above sea level).

The length of the bike ride today will be only 9 km. After breakfast, we will start climbing the mountain plateau and go to the heart of the Aktau Mountains. Here, thousands of granite rock sculptures are scattered over a huge area, looking like huge fantastic birds and animals. After lunch, we will make a fascinating ascent to the top of the Pagoda, 2km, + 200m, -200m, 2.5-3h. During the ascent, stops are possible for numerous photo shoots. From the top of the Pagoda there is a magnificent panorama-among the rocks you can see the entire bike route, which we will ride on bicycles tomorrow. Return to the camp. Overnight in tents (790 m above sea level).

This is the final day of biking. From the camp under the peak, we need to drive through three stone belts and go down the dirt road to the village of Chashtepa. If the tour is held in May or early June, then during the entire descent, tourists will be able to admire the vast fields of various mountain flowers. An asphalt road starts from the village of Chashtepa. Another 10 km of cycling, and we go to the highway, where the tourists are already waiting for the bus. Here we finish the cycling part of the tour and go to Bukhara. Overnight at a hotel in Bukhara.

Today we have a sightseeing tour of Bukhara for the whole day. Bukhara is one of the oldest cities in the world, located on a sacred hill, it is assumed that it was founded in the 13th century BC during the reign of the Siyavushids, who came to power 980 years before Alexander the Great. The city with 140 architectural monuments was once a major trade center on the Great Silk Road. The old city of Bukhara consists of a maze of narrow streets, lively bazaars and colorful historical attractions, mostly dating back to the Middle Ages. Today we will visit the mausoleum of the founder of the Samanid dynasty (XX century), the citadel of Bukhara-Ark (VI century), surrounded by massive defensive walls and overlooking the Old City. We will also visit ancient mosques, madrassas and ancient domed bazaars: Chashma Ayub mausoleum (XIV-c.), Poi-Kalon Square (XII-XVI c.), Ulugbek Madrassah (grandson of Tamerlane, an outstanding mathematician and astronomer), Lyabi-Hauz complex (XVI-XVII c.), Bolo Hauz Mosque, the summer residence of the last rulers of Bukhara, Sitora Mokhi Khosa, located in suburbs.
13

Today we will have a whole day to explore the sights of Samarkand, which were built 7 centuries ago. Registan Square is considered one of the wonders of ancient world. It is the "heart" of Samarkand and the main city square, surrounded by three impressive 14th-century madrasas with cozy courtyards. These huge buildings with domes and minarets are intricately laid out with charming azure-blue glazed tiles. We will also visit the grandiose Bibi-Khanum Mosque, the nearby Siab Bazaar and the Gur-Emir mausoleum - the resting place of the Timurid royal family. The remains of Ulugbek Observatory, the Shahizinda Necropolis, the resting place of the princesses and princes of the Timurid dynasty, as well as the aristocracy of that period, boasts unique architectural masterpieces of intricate tile patterns that turn this sanctuary into a real paradise of green turquoise and blue azure colors.
15 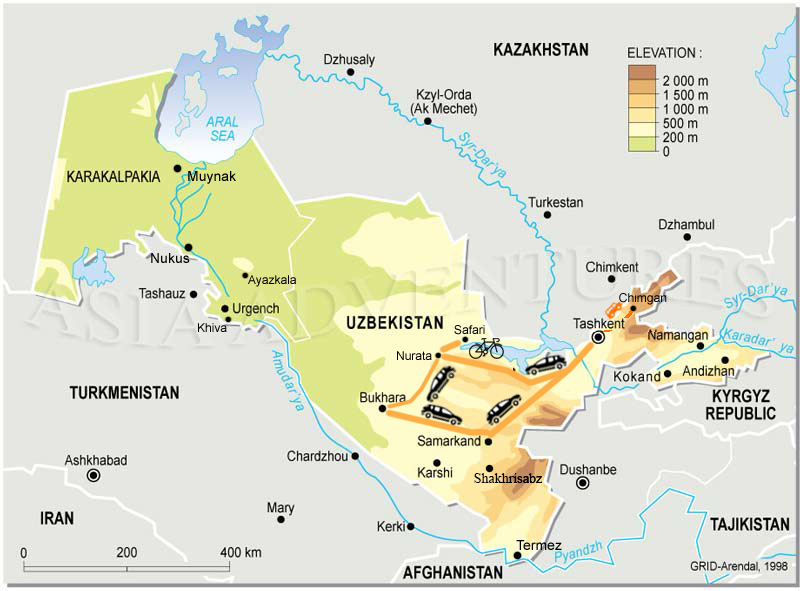