The Opera and Ballet Theatre is one of the most interesting tourist attractions in Tashkent. The theatre is located in the very heart of the city, next to the Central Department Store and Tashkent’s oldest hotel, in a historical building with an original design. The theatre’s history began in the 1920s, when M. Kari-Yakubov, a theatrical art enthusiast, organised an ensemble of professional musicians and dancers in Tashkent, which became the core of the State Uzbek Musical Theatre founded in November 1929. In 1939 the theatre staged its first opera Buran by Uzbek composer Ashrafi. After that the theatre gained a new status and was designated the State Uzbek Opera and Ballet Theatre. In March 1948, to commemorate the great Uzbek poet, its name was extended to Alisher Navoi State Opera and Ballet Theatre. In 1959 the theatre was awarded the title of ‘academic,’ and in 1966 – ‘grand.’ Since then the Alisher Navoi State Opera and Ballet Grand Academic Theatre has repeatedly justified its great name.
more...


The Alisher Navoi State Opera and Ballet Grand Academic Theatre deservedly ranks as Uzbekistan’s main theatre, the pride of the nation and the centre of the country’s musical and theatrical life. It has a long and glorious history marked by numerous wonderful traditions. The theatre has absorbed the whole diversity of the global and national heritage to create unique works of the Uzbek musical and dramatic art.

The theatre was designed by Soviet architect Academician Alexei Schusev, who was also the author of Lenin’s mausoleum in Moscow’s Red Square, and built in 1948. The building was decorated by People’s Artists of Uzbekistan Sh. Muradov, A. Khudaybergenov, Kh. Boltayev and others. Japanese prisoners of war were involved in the final construction stage. Stylistically, the theatre building is an original combination of European architecture and oriental elements, which places the construction quite apart from the rest of its kind. The tall and imposing arches rest on sturdy abutments and resemble in appearance iwans in madrasahs. The high portal ornamented with a stalactite cornice is topped with turrets similar to the minarets of Bukhara. The diversity of architectural styles, galleries with arched ceilings and ornamental fretwork in polished marble do leave unforgettable impressions. Each of the 6 side foyers - the Tashkent, Bukhara, Khorezm, Samarkand, Fergana and Termez halls – is characterised by its personal style, reflecting the architectural peculiarities of each of Uzbekistan’s regions. The theatre’s halls and foyers are decorated all over with marvelous fretwork in ganch (gypsum) and wall paintings.

A fountain in the form of a cotton boll was erected in the square opposite the theatre. In 2010 the fountain was reconstructed: it was provided with an illumination system and musical accompaniment. 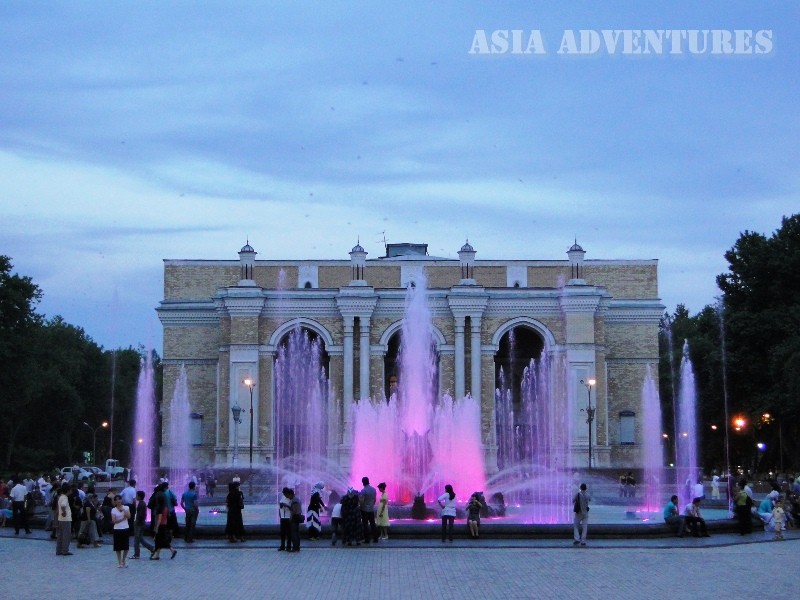 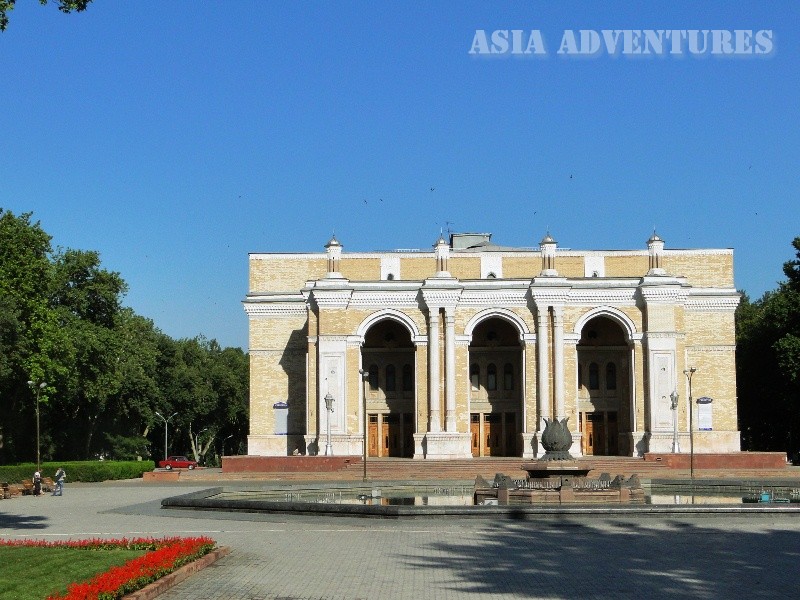 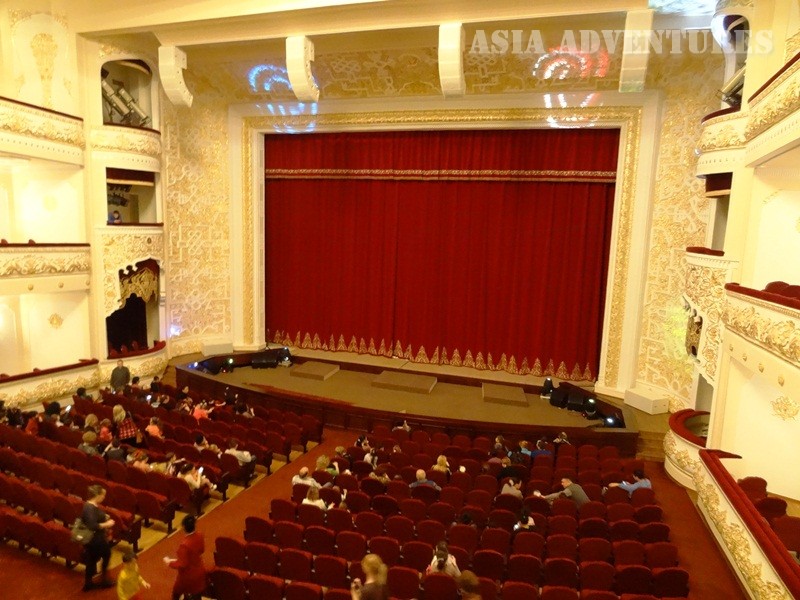 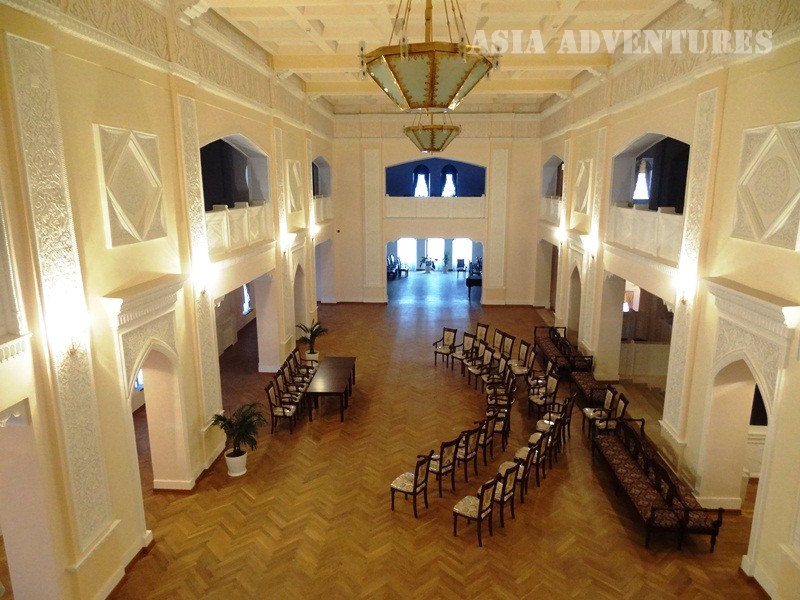 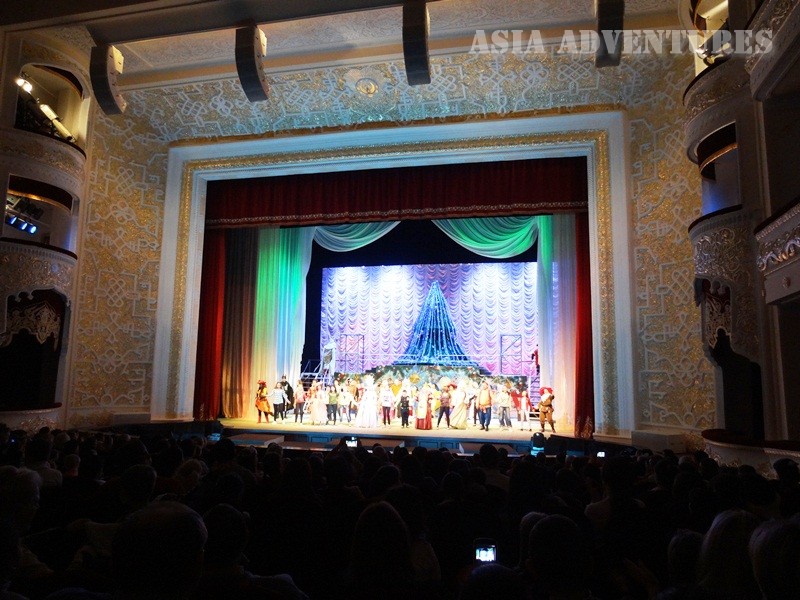 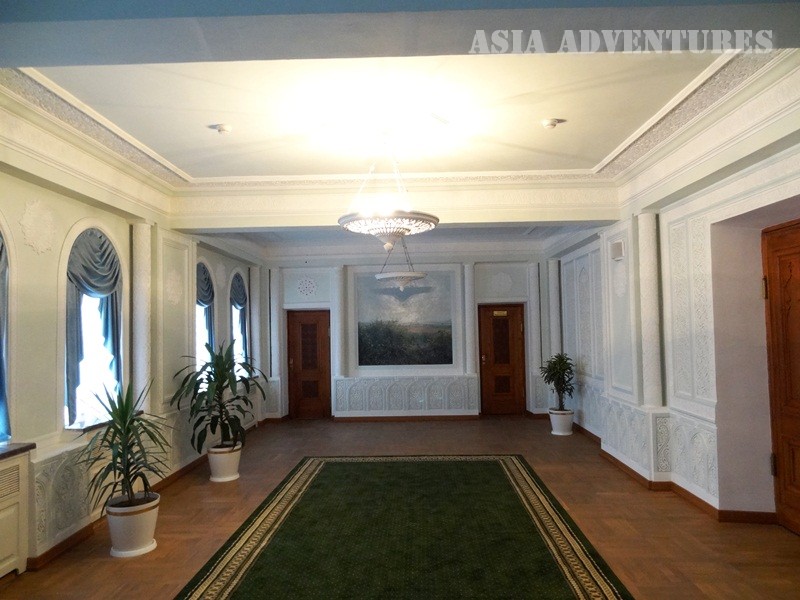 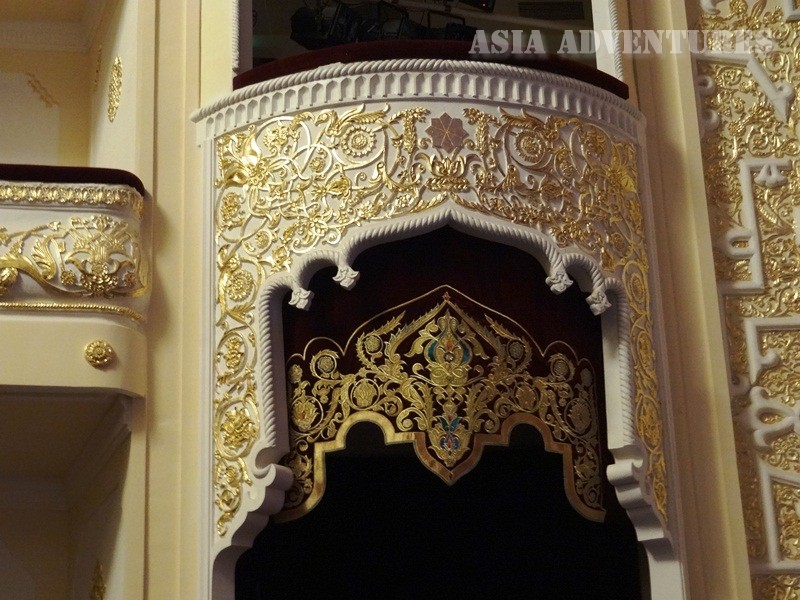