Artistic ceramics is one of the most ancient and interesting types of applied arts in Uzbekistan. The earliest ceramic items discovered by archaeologists in the territory of the country date back to very ancient times. The articles found include lagans (large plates), hemispherical pialas and kosas (bowls), vases, khums (large jugs), and jugs of various dimensions – from large to the tiniest, very delicate and convenient at the same time. Ceramic articles have always been in high demand in the region. Many of those items produced today in Uzbekistan are distinguished by high level of performance, beautiful forms, original ornamental patterns and soft and harmonious colours.more...

The works of Uzbek ceramists may be found in museums and private collections around the world.

Samarkand, Gijduvan, Shakhrisabz, Kattakurgan, Rishtan, Tashkent, Khanki and Khiva in Khoresm have been known as centres of potter’s arts of Uzbekistan since ancient times.

The forms potters from all these regions, cities, towns and villages use are more or less the same. These are a dish called a lagan, a kosa (a bowl on an annular bottom plate for liquid food), a piala (a small kosa for tea), a khurma (a vessel with a lid resembling a tureen), an oftoba (a narrow-necked jugs for water) and others. These are the forms spread widely across Uzbekistan, with peculiarities and variations in different regions though, and, therefore, with different names.

The ceramic kitchenware is made of local sorts of clay. Each sort has its own shades of colour and plastic properties, which makes the ceramic kitchen utensils of a particular region finely unique, though this uniqueness is sometimes barely sensible. In Uzbekistan before painting potters usually cover ceramic items with slip, a mixture of high-grade fire-proof white and red clays. Local ceramists call the slip ‘astar’, which can be translated as ‘underlayer’, that is, a background to the pattern. Usually slip and glaze cover about a half of the outer surface of a vessel, the lower part of the walls and the bottom remaining uncovered.

Pigments used in the Uzbekistan ceramics since ancient times are ferric oxide (a range from red to brown), manganese oxide (from black to pink-violet), copper oxide (green), antimony oxide (yellow) and cobalt (blue). Some of these pigments are still produced manually, from iron and copper chips, for instance. However, these pigments are replaced gradually by manufactured dyes. Glaze may be colourless – transparent – or with the addition of a pigment, usually green or yellow. In some regions, for instance, in Khoresm, potters use potash or alkali glaze (‘ishkor’), which is produced by burning of certain types of plants. Copper oxide added to glaze in combination with tin produces the beautiful turquoise colour. Regulating the amount of tin in the turquoise glaze various degrees of transparency may be achieved. A pattern cut on a clay surface and seen through semi-transparent glaze looks particularly amazing.

There are three traditional types of decoration technique used in our days: kalami – free painting with a brush, various types of stamping with dye easily absorbed by the surface, and chizma – engraving of ornamental patterns on the slip. The décor of the Uzbek ceramics is largely characterised by plant and geometric ornaments, which have been developed to a very high level in the local art.

Each region favours it own combination of colours. The schematic division into two principal colour ranges, the various shades of blue constituting the first range and colours from brown to green the second one, that existed in the potter’s art in the 19th-early 20th centuries, is still actual today. The former is more characteristic of the Fergana valley, Khoresm and Karakalpakstan, while the latter - of Gijduvan, Jizzah, Samarkand, Kattakurgan, Shakhrisabz and Tashkent. Though the ceramics from Rishtan and that from Khoresm and Karakalpakstan are very similar in colour, their principles of decoration differ a lot. This difference is connected with the local peculiarities in the arts of these regions, as well as with the different ways of historical development. 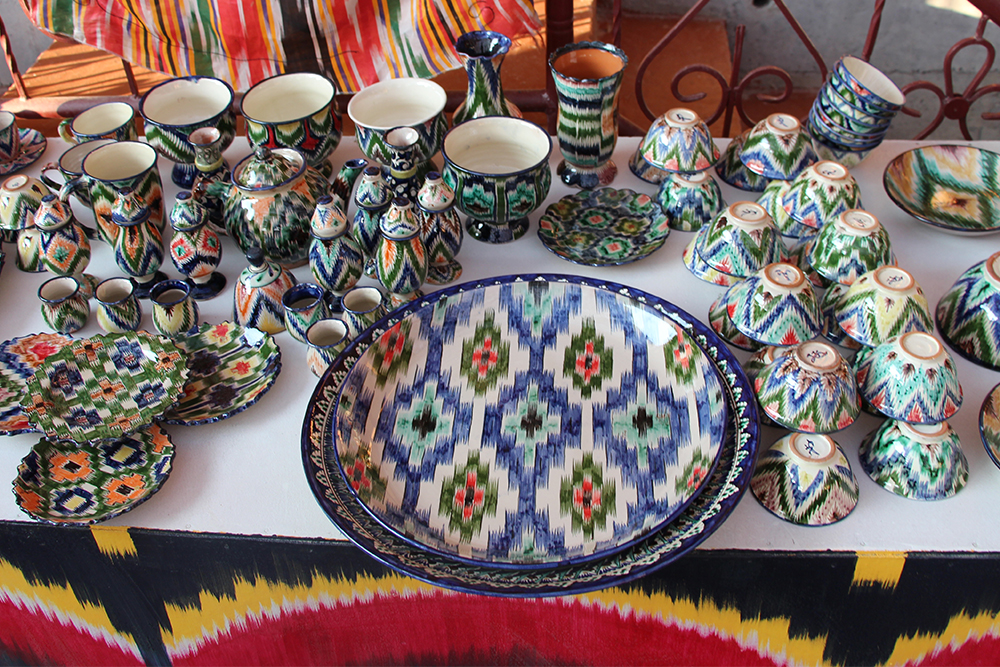 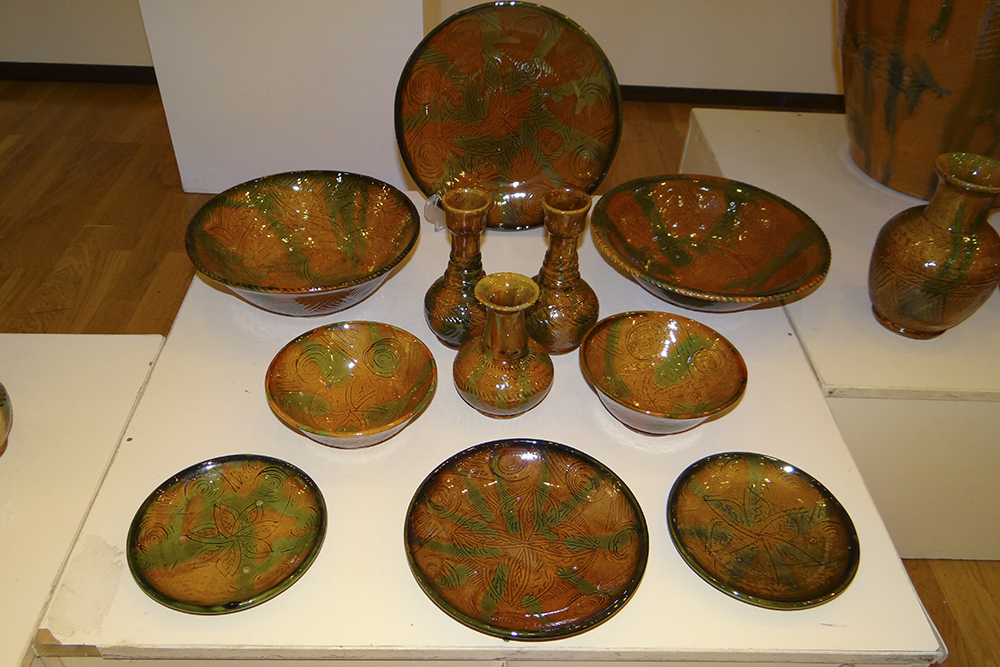 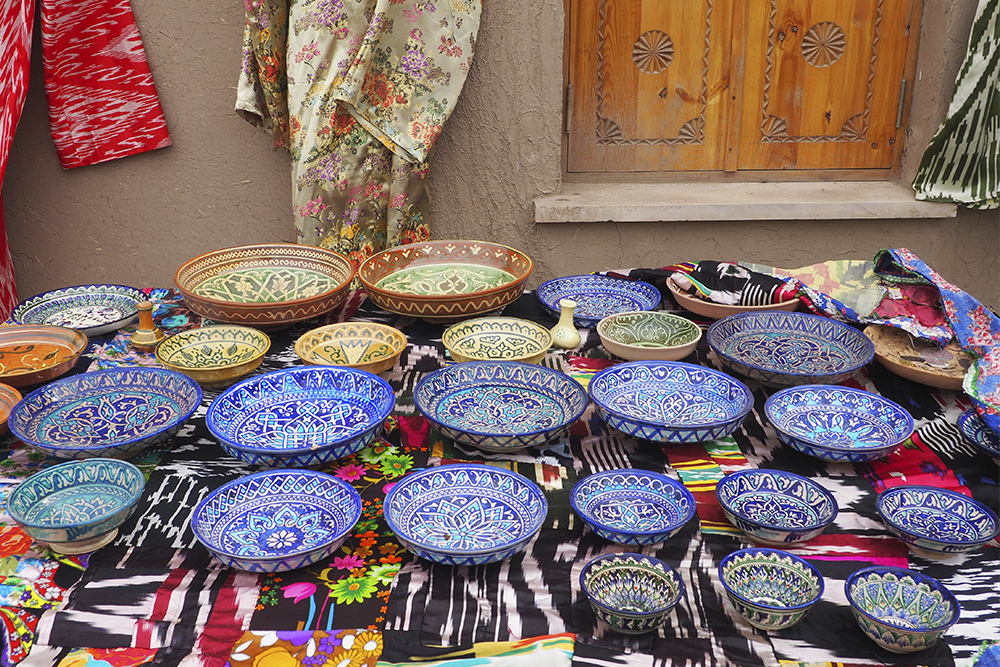 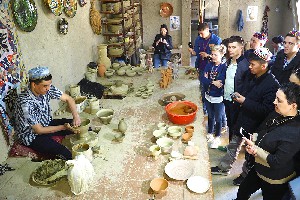 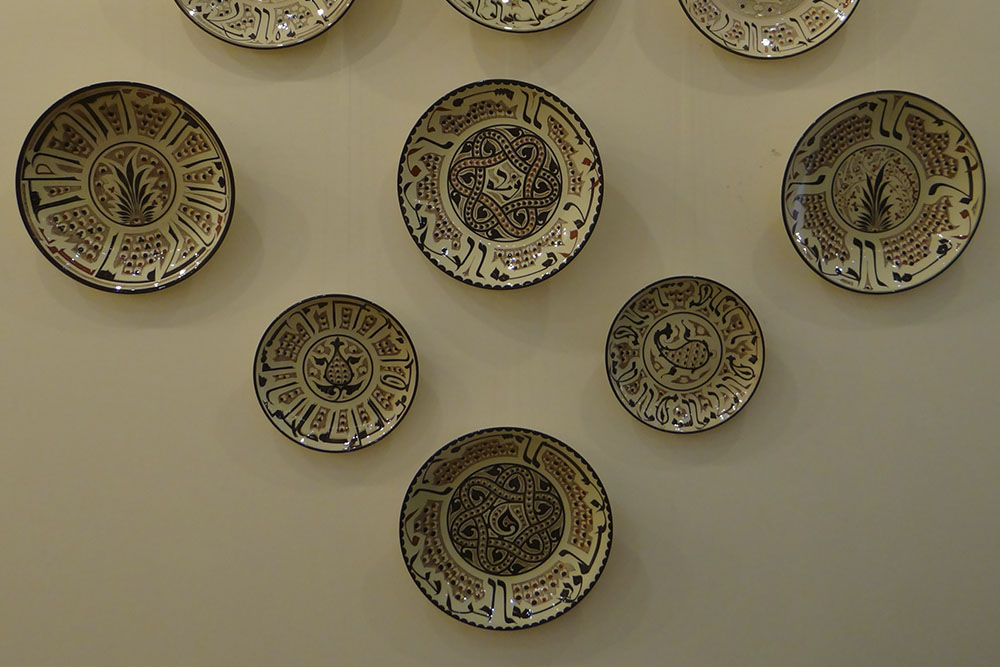