The Hissar National Reserve is situated in Kashkadarya province, Uzbekistan, on the western slopes of the Hissar Range, at an altitude ranging from 1,750 m to 4,349 m above sea level. From the east and southeast the reserve is bordered by Surkhandarya province, Uzbekistan, the borderline running along the ridge of the Hissar Range, from the north – by Tajikistan. The Hissar Reserve was established in 1983 through joining two independent mountain reserves – the Kyzylsuy Reserve and Miraki Reserve. As the territories of the two reserves were quite significant in area, the present-day Hissar Reserve is the largest in Uzbekistan with a total area of 80,986.1 ha.
more...


Geographically the reserve is divided into 4 territories.

The Tashkurgan section is situated in the basin of the Kyzyldarya river at an elevation between 1,800 m and 4,000 m above sea level and occupies a territory of 30,094 ha. Outcrops of many-coloured rock formations – red sandstone and various clays and shales – are among the most characteristic features of the section along with a huge tectonic fracture running along the left bank of the Kyzyldarya from the source of the river to the reserve boundary near the village of Tashkurgan.

The Miraki section is situated in the northwestern part of the reserve at an elevation from 1,800 m to 4,300 m above sea level. Its total area is 11,821 ha. The territory is deeply cut by numerous barely accessible river valleys with steep walls and a lot of screes and covered by a large number of alpine meadows and snow-patches.

The Gilan and Tankhyz sections are the most elevated and are situated in the basins of the Aksu, one of the largest rivers in the territory of the reserve, and the Tankhyzdarya, at an elevation ranging from 2,500 m to 4,300 m above sea level. The total area of the sections is 30,094 ha. The predominating types of landscape in the territory are alpine meadows, rocks and taluses. The high-altitude part of the section features the Severtsov Glacier, the largest one in Uzbekistan.

The climate in the Hissar Reserve is sharply continental. The spring is rather long lasting from March to May, with much rain and unstable weather. The summer comes late in May or early in June; however, in the subalpine zone and on the treeline patches of snow remain till June and even July, with flowers visible between them. In summer the weather in the mountains is cool, but generally with much sun and little precipitation. On the adjacent plains the temperature in summer may reach +(35-40) °C, while at high altitudes the temperature during the day usually does not exceed + 25 °C with snowfalls occurring even in summertime. During the night the air temperature may drop below zero even in summer. The average temperatures in January are –(10-15) °C, in July – +(10-12) °C. The total amount of precipitation during a year is 700-800 mm, the largest portion of which falls in winter and spring. Summer is characterised by thunderstorms, torrential rain and, rarely, snowfalls. In the upper zones of the reserve snow lies all year round, with tongues of the Severtsov Glacier with a thick layer of ice extending into the territory of the Hissar Reserve.

The flora of the reserve, represented by a great number of species, is quite typical of Central Asian mountains. The plant world of the western part of the Hissar Range includes about 1,500 species, more than half of them growing in the territory of the reserve. Forests in the Hissar Reserve are mainly composed of two subspecies of juniper. The western Hissar Range is rather poor in wood and shrub species, with only about 60 growing in the territory of the reserve. Apart from the junipers (Juniperus seravschanica and Juniperus semiglobosa), the reserve features several maples (Acer turkestanicum, Acer pubescens and Acer semenovii), an ash (fraxinus sogdiana), a hawthorn (Crataegus pontica), a rowan (Sorbus turkestanica), an apple (Malus sieversii), a cherry plum, an oleaster, the Wild Almond (Amygdalus bucharica) and a pear (Pyrus regelii). Other species are either shrubs or are represented by shrubby forms. The underbrush consists of Crataegus pontica, Sorbus turkestanica, the briar, honeysuckle and barberry, which grow there in large quantities. The oxytrope, geranium and Cusinia are also quite common for the reserve together with the groundsel and Aconogonon, which are the favourite food of wild goats and marmots.

The Hissar Reserve is a habitat for 2 species of fish, 19 reptiles, 169 birds (with 103 species of nidifying birds) and 28 mammals. The reserve features a number of animal species included in the Red Book of the Republic of Uzbekistan, among which are the Tien Shan brown bear, Central Asian otter, snow leopard, Turkestan lynx, booted eagle, golden eagle, bearded vulture, Himalayan griffon vulture and saker falcon. Almost all large streams with clean water intersecting the territory of the reserve are inhabited by the marinka (Schizothorax intermedius MC Glell); the trout lives there in smaller quantities.

Tourist objects and attractions in the Hissar Reserve and its neighbourhood.

The territory of the reserve includes a number of tourist objects. The most interesting of them are:

- the holy mountain of Khazret-Sultan;
- the Tamerlane cave;
- Petrified dinosaurs" footprints;
- the Suvtushar waterfall;
- the karst plateau of Kyzylshavar;
- the high-altitude plateau of Hojakarshavar;
- a series of high-altitude lakes Janka;
- the grandiose Kalasay canyon;
- the Zarmas canyon;
- picturesque panoramas with the peaks of Hojaakchaburun (3,855 m) and Hojapiryakh (4,425 m);
- the Severtsov Glacier;
- the unique villages of Gilan, Zarmas and Kul;
- the pastures of Kyzylgaza. 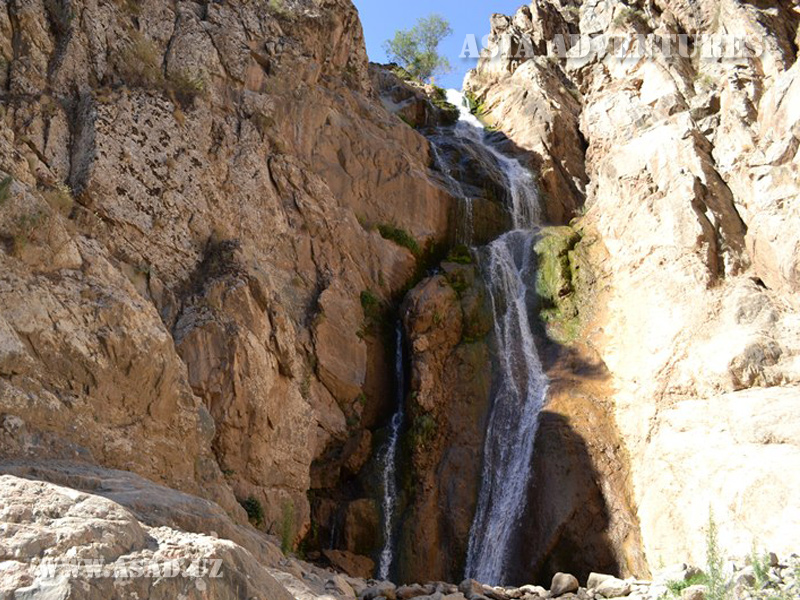 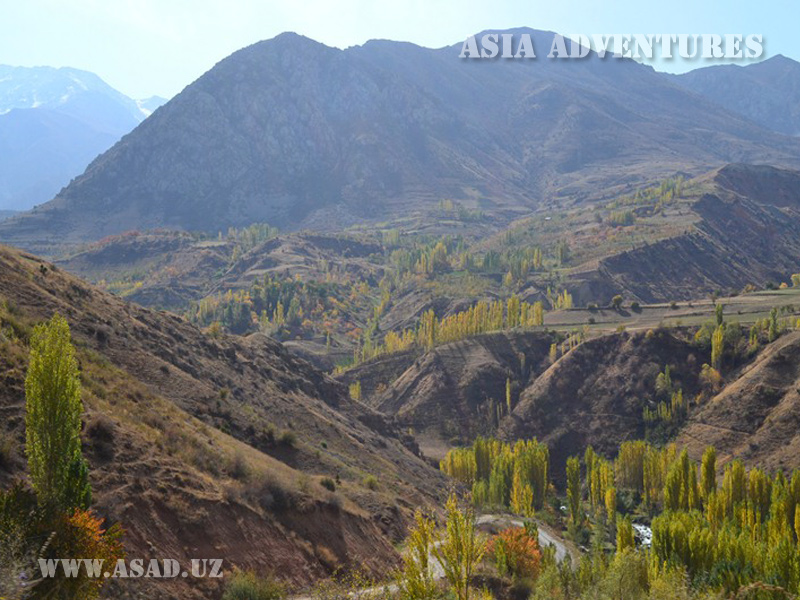 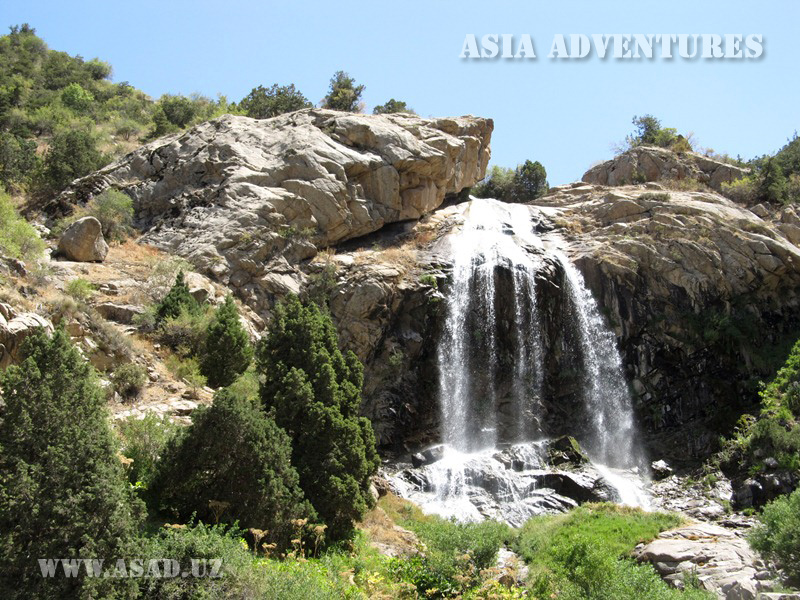 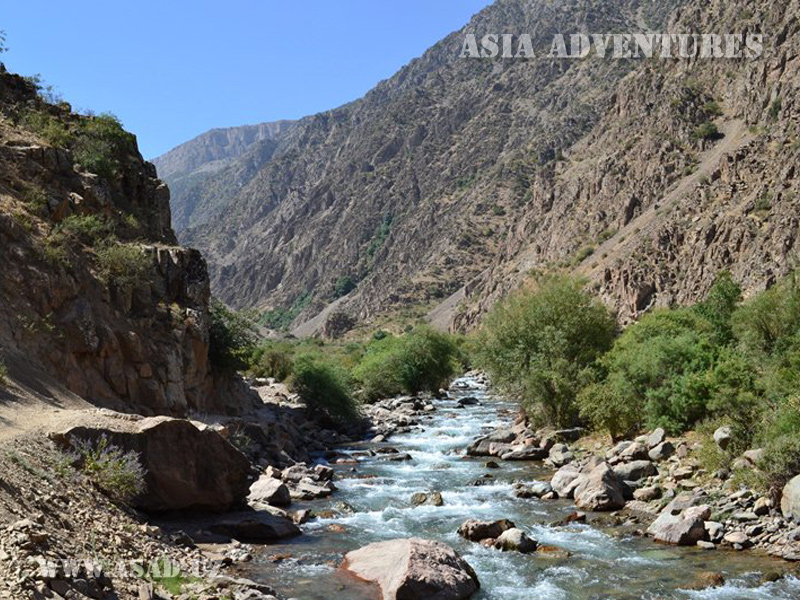 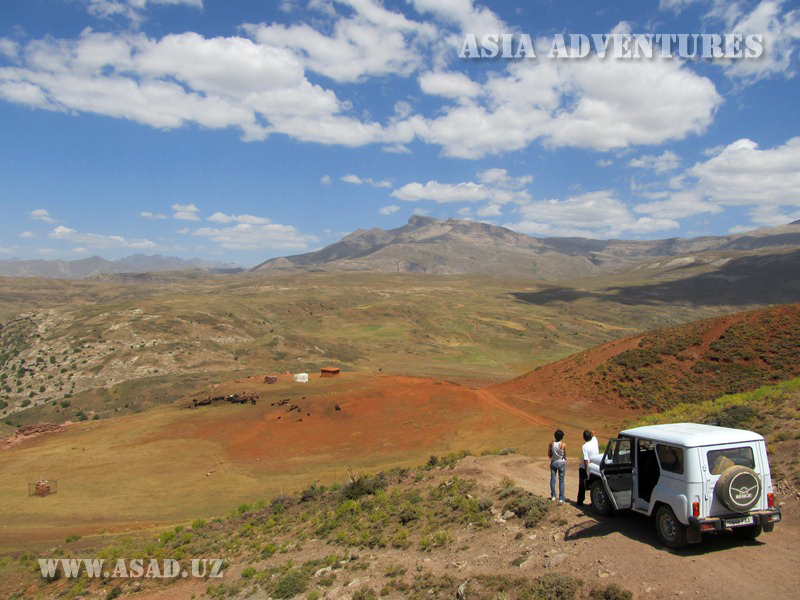 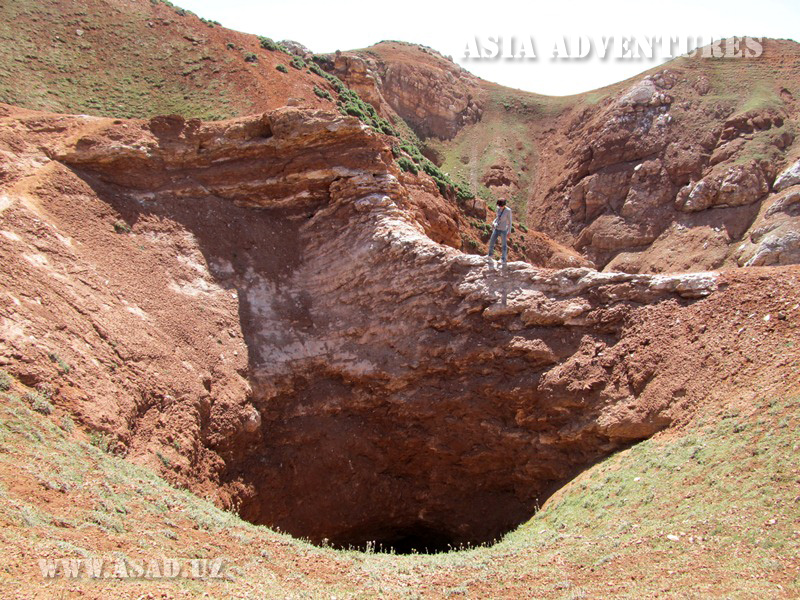 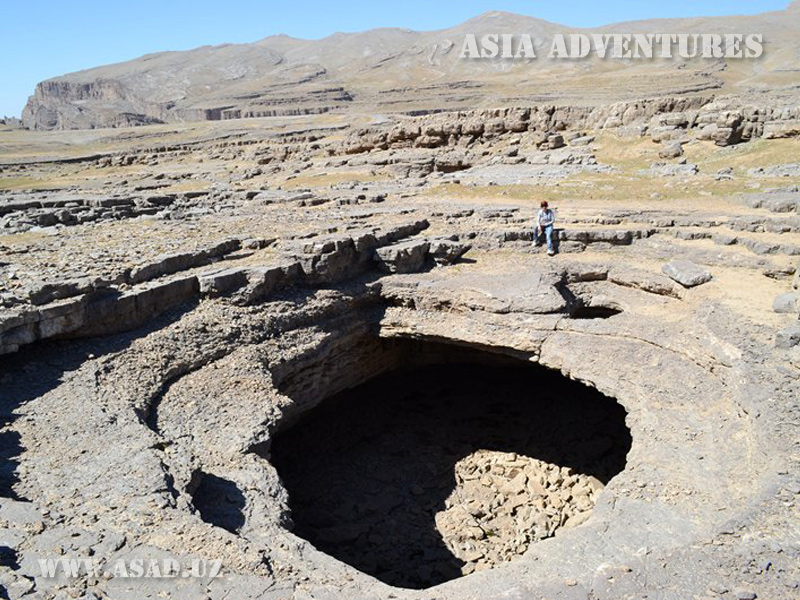 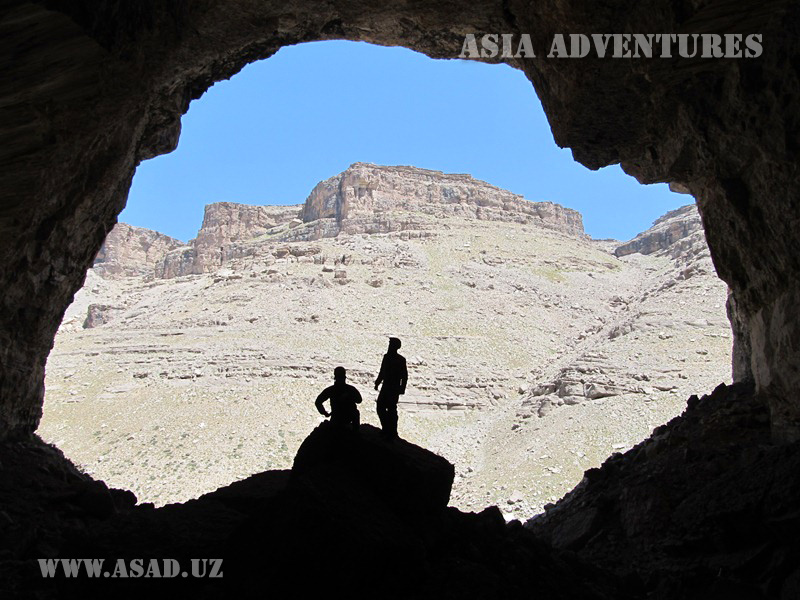 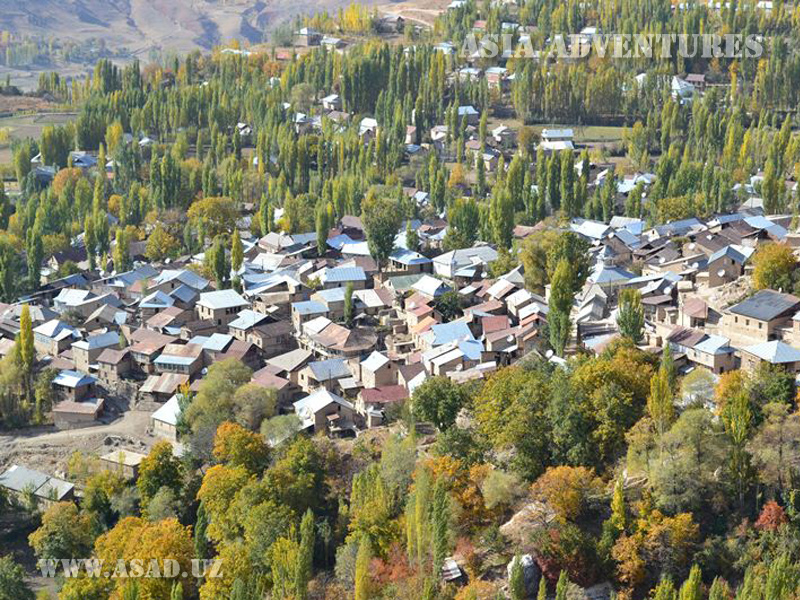 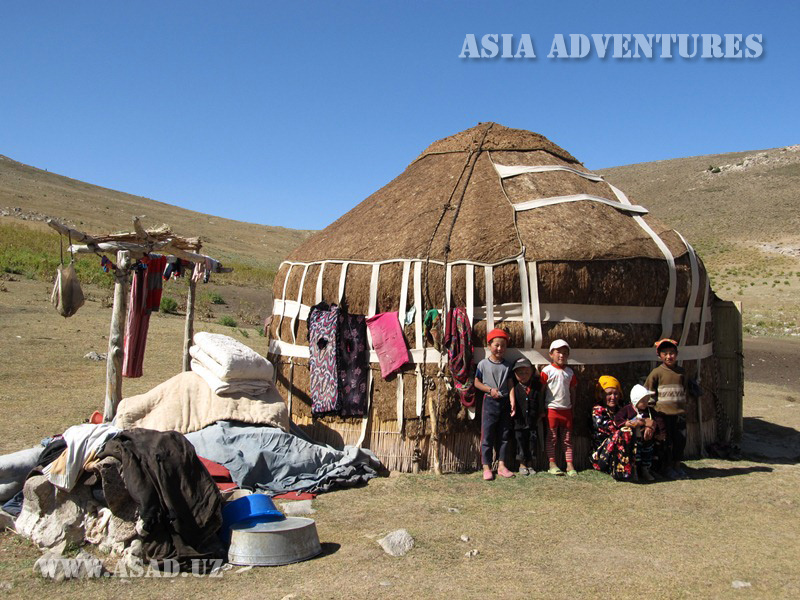 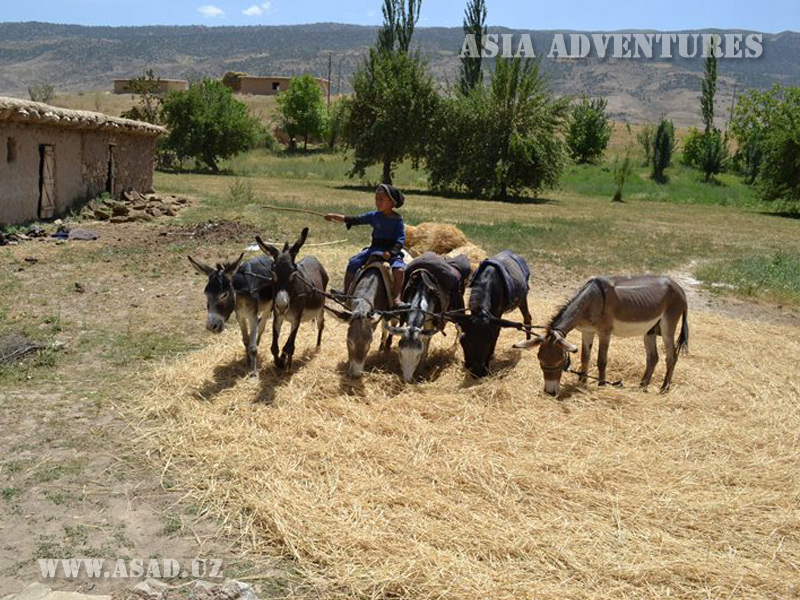