Religious – memorial complex of Imam Al-Bukhari is located in kishlak Khartang of Payaryk district of Samarkand area in Uzbekistan in 15 km from Samarkand city. The complex was built in 1998 on ancient kubba (burial place) of famous Islamic religious figure Imam Abu Abdullakh Mukhammad ibn Ismail Al-Bukhari on the occasion of 1225-years from the date of his birth. The best national masters of Samarkand, Tashkent, Bukhara, Khiva, Shakhrisabz, Andijan, Kokand and Namangan took part in its building, which had been finished by October in 1998. As a result, a new complex took in the best traditions of some architectural schools of Uzbekistan and legally, it became one of the brightest model of modern Central Asian art.

Abu Abdullakh Mukhammad ibn Ismail Al-Bukhari – a famous theologian, scientist, Khadis-studying (Khadis-study is a science about Khadis, information about statements and actions of the Prophet Mohammed) and the second author by value after the Koran – Muslim book “Al-Jomiy as-Sakhih” (“Authentic collection”). Imam Al-Bukhari was born in 810 in Bukhara. His father was one of the narrators of Scriptures. Mukhammad was penetrating, quick-witted, was possessed of an extraordinary memory for his age. When he was 7 years old, he studied the whole Koran, at 10 years old he knew by heart few thousands Khadises. In 825, when he was 16, Al-Bukhari with his mother and elder brother Akhmed made a hajj to Mecca and Medina. After going pilgrimage, Al-Bukhari had been travelling a lot to Muslim countries, where he apprenticed with famous theologians of that time. According to legend, he collected hundreds of thousands Khadises, and many of them he knew by heart. He spent 42 years of his life in the research. Sixteen years more he spent for writing a book. 7275 of the most authentic Khadises (from 1080 experts, who were direct witnesses of the Prophet acts) were included into his book. Mukhammad Al-Bukhari died in 870 in Khartang settlement near Samarkand. His grave became the most respected and sacred place for the pilgrimage. In ХVI century a small mosque was built near Imam Al-Bukhari’s mausoleum and there are a lot of plane trees.

During Soviet time, this sacred place for Muslims was fallen into oblivion, and there were no divine services. Step-by-step, the mosque had been becoming dilapidated, but in 1945 it was destined to relive due to visit of the president of Indonesia Sukarno, who asked the government to bow down to remains of Saint Al-Bukhari. Ever since the mausoleum and mosque of Ismail Al-Bukhari have been passed to the Religious Board of Muslims of Central Asia and Kazakhstan, and ever since worshippers have visited the mosque again.

A modern complex stretches on the territory of 10 hectares and consists of the mausoleum, mosque, administrative building, ayvan and other buildings. The entrance is carrying out across intake portal, rigged with carved gates. There is Ismail al-Bukhari’s mausoleum in the centre of complex, in form of right-angle prism, square in the base, its area is 9x9 meters, its height is 17 meters. The dome of mausoleum is double, ribbed, and decorated with blue tiles. Walls are decorated with mosaic, majolica, clay, onyx, granite with vegetable and geometrical design. There is a monument in the center, made from light-green onyx.

On the left side of the yard, there is a mosque, khonaka and gallery with the area of 786 sq.km, where 1500 believers can pray at the same time. On the right side, there is a library and a museum with rare samples of handwritten and lithographed books of Islamic theology, gifts of statesmen of different countries, including the part of “kiswa” – the Holy carpet from the Caaba in Mecca. It was presented to the memorial by the king of Saudi Arabia.

Today, the memorial complex of Imam Al-Bukhari is a place of Muslim divine services and pilgrimage. The visiting of this place is equal to small hajj for Muslims. 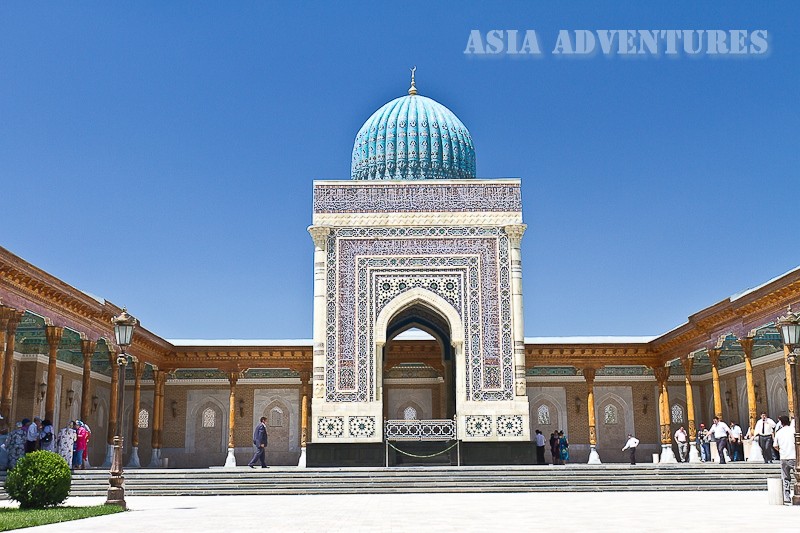 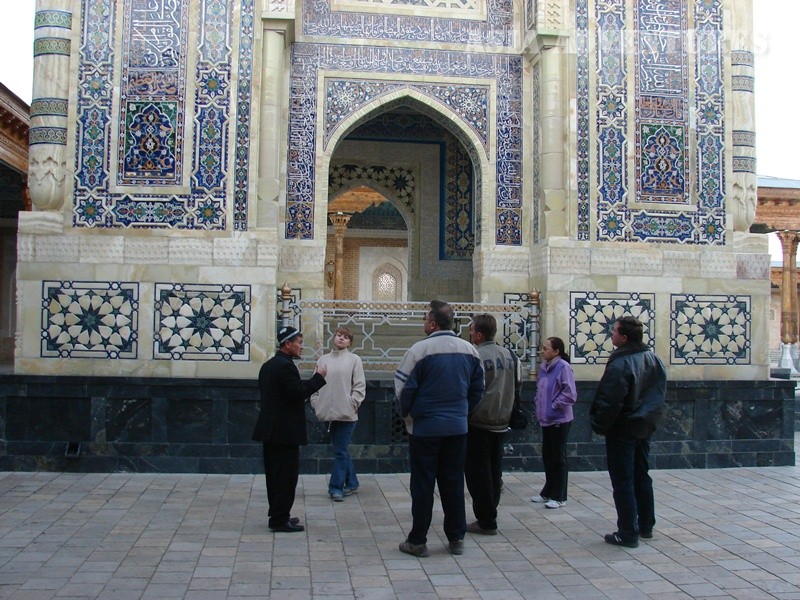 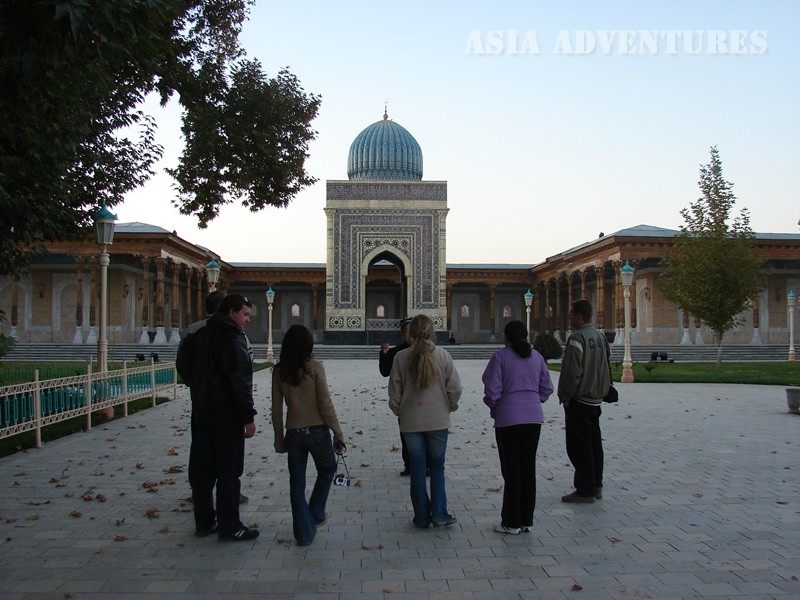 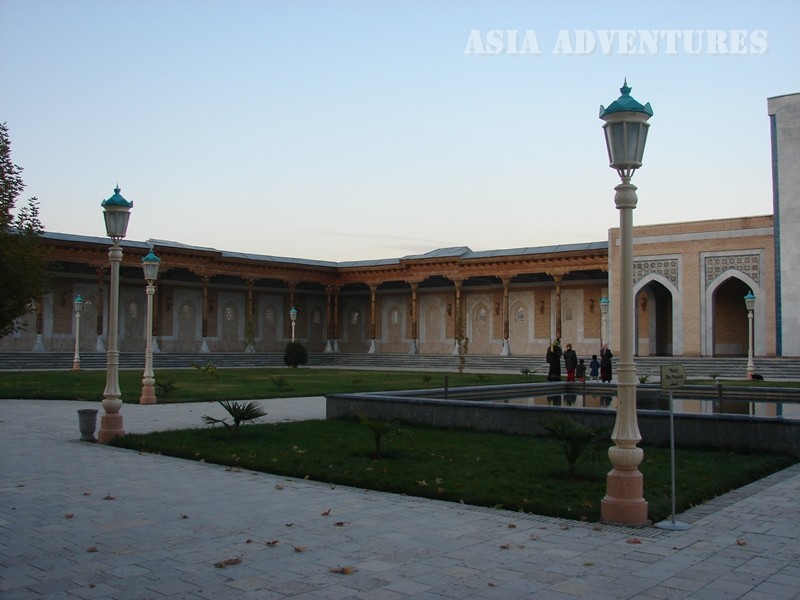 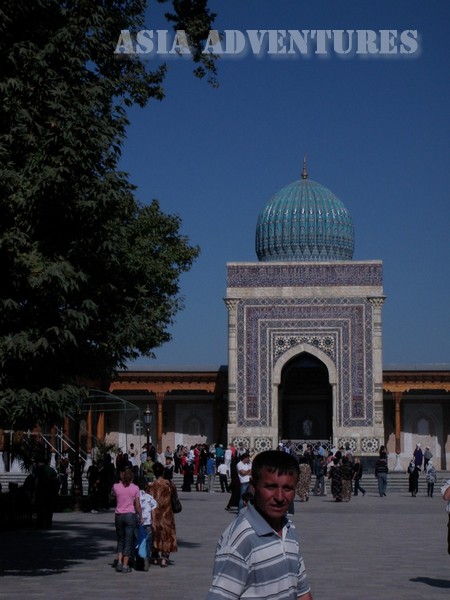 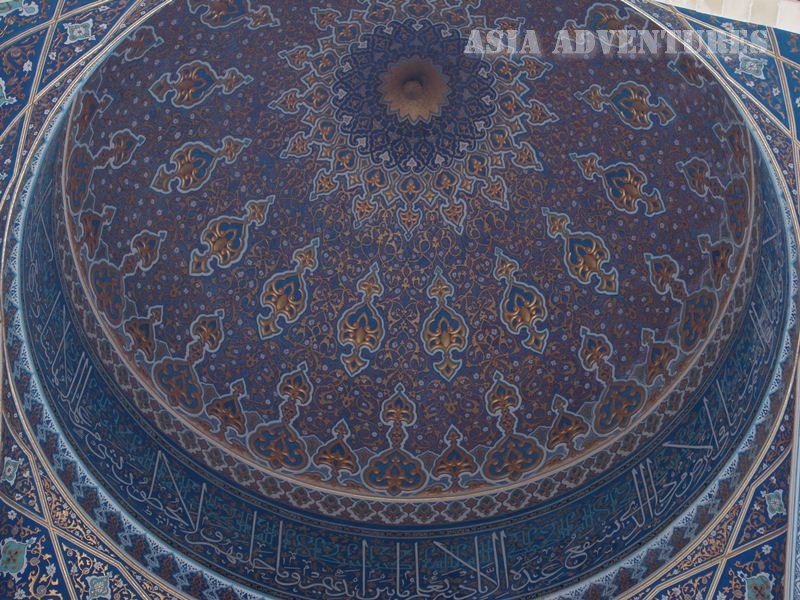 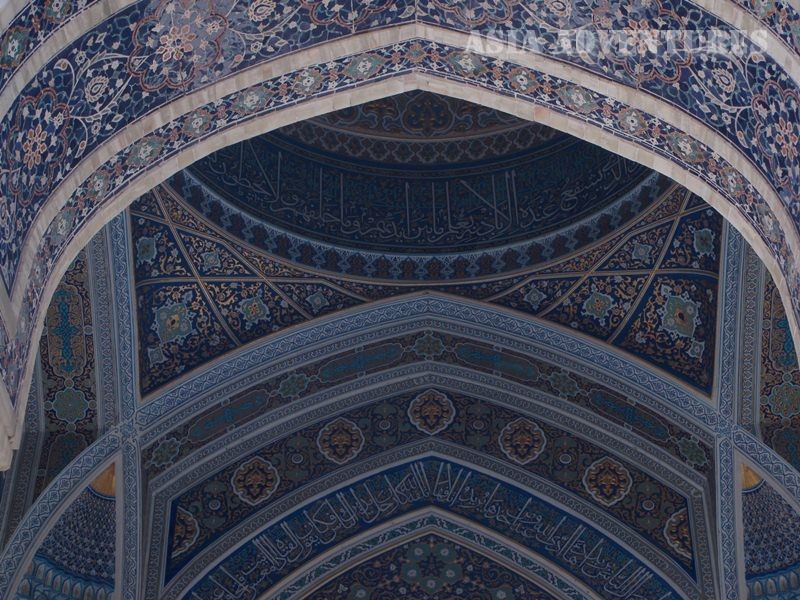 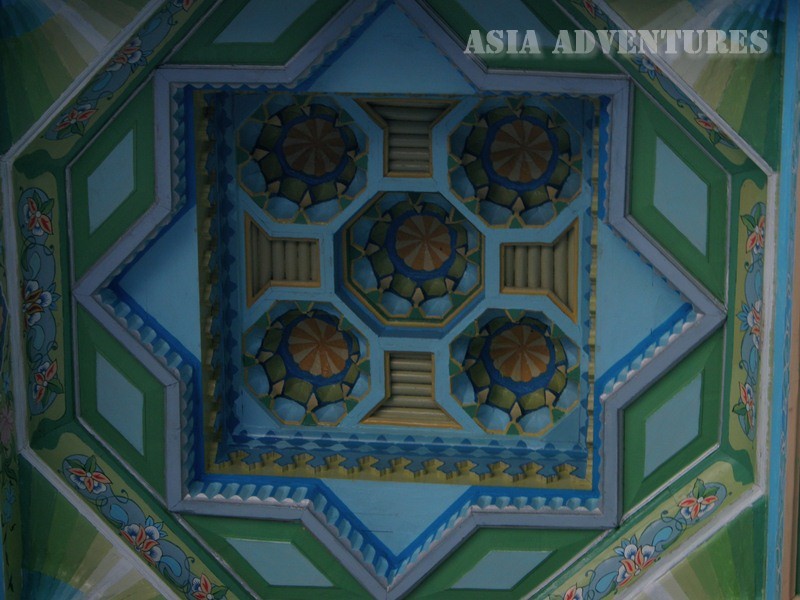 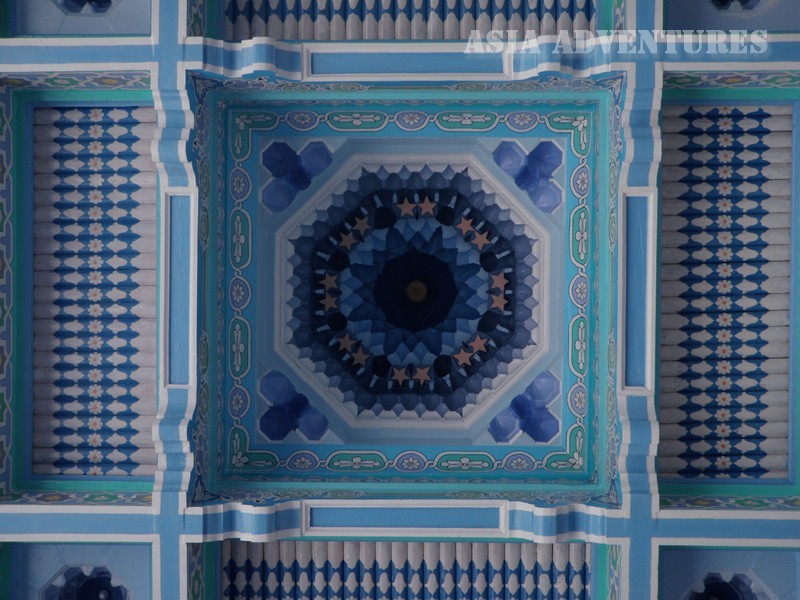 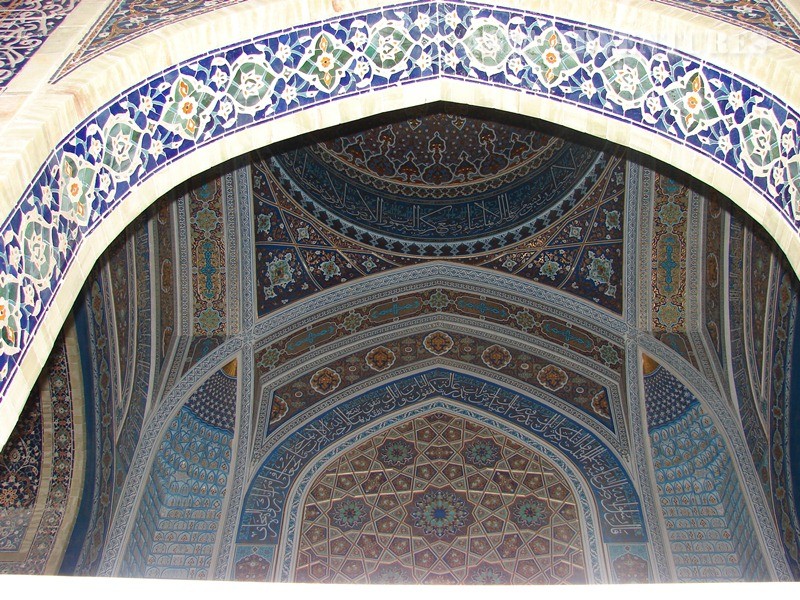 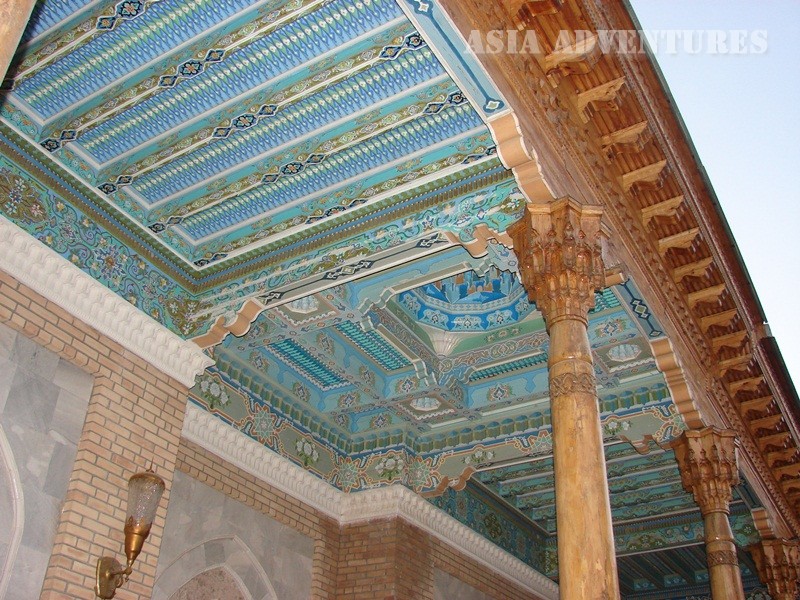 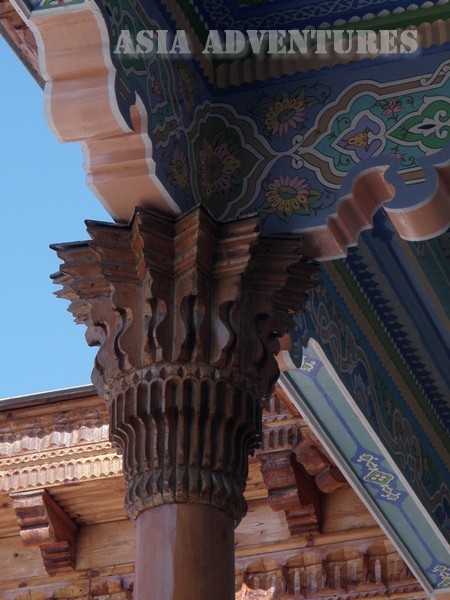