The whole world knows about the architectural miracle called the Taj Mahal. The emperor Shah Jahan built it to immortalise his favourite wife Mumtaz Mahal, whom he loved deeply. Several centuries before, Tamerlane the Great constructed the Bibi-Khanum mosque in commemoration of his favourite and beloved wife. This is a truly epic construction, so magnetic it is impossible to take one’s eyes off it. You should only see the dome of the mosque, which in ancient times was compared to the skies, and the arch of the portal, which was called by the lofty name of Milky Way.
more...


The Bibi-Khanum mosque (which translates as ‘the senior wife’, as, according to a legend, it was constructed by Tamerlane’s eldest wife Saray-Mulk-Kanum) was Samarkand’s central mosque, which on Friday received thousands of male Muslims. In reality, the building was constructed in 1399-1404 by Tamerlane’s order, after he had returned from his Indian campaign. The construction of the mosque, the site for which was chosen by Tamerlane himself, was begun in 1399. Masters from various countries, such as India, Iran, Khoresm and the Golden Horde, were involved in the construction. By September 1404 the main part of the complex had been completed. The court of the mosque had enough space for 10 thousand preying Muslims.

‘On Sunday, on the 4th day of the month of Ramadan, 801 (1399 by our calendar), skilled engineers and experienced masters laid the foundation of the building at an hour, which was determined by the stars as happy. About 200 stonemasons from Azerbaijan, Persia, Hindustan and other regions worked in the mosque, 500 persons were engaged in cutting the stone in the mountains and about 100 Indian elephants carried it to the city’. This was the description given by Ruy Gonzales de Clavijo.

Tamerlane ordered certain minor rulers and emirs to supervise the construction. Each of them was responsible for his own construction section and each was hurrying to demonstrate his ardour. The portal, the main building of the mosque, the walls and the arcades were being constructed by teams of masters directed by the chief builder, who used a three-dimension model of the construction. This can be seen in old miniatures. Tamerlane watched the construction process for several months, but then was detracted for several years by a new military campaign, this time aimed at conquering the Ottoman Empire. The construction continued in his absence. As he returned to his capital, he immediately went to the building site to see the new mosque. Grandiose constructions surrounded a court 130 x 102 m in size. The western side of the court was bordered by the huge main mosque, the southern and northern sides – by minor mosques. The extensive court was paved with marble slabs and surrounded by a roofed gallery for preying people. The entrance to the court had the form of a tall portal flanked by two round minarets, which were 50 m in height. The façade of the main mosque was also decorated with a majestic portal with two minarets. The walls of all the buildings were decorated on the outside with many-coloured glazed bricks forming intricate decorative patterns and religious sayings. The interiors were richly and beautifully decorated with majolica, mosaics, fretted marble, papier-mâché and gilding. Today in the centre of the court one can see a marble rest for a large Koran with Arabic inscriptions carved on it, which in the 19th century was taken out of the main building.

Opposite the mosque was the madrasah of Saray-Mulk-Khanum, Tamerlane"s senior wife. Both these buildings facing each other formed a square. A small octagonal domed mausoleum with a burial vault, known as the Bibi-Khanum mausoleum, is what remains of this madrasah, the size and beauty of which once rivalled those of the Bibi-Khanum mosque.

Time did not spare this wonderful monument: the construction was heavily damaged. However, for the last 30 years it has received repair and restoration works which have made the monument look as beautiful as it once was. 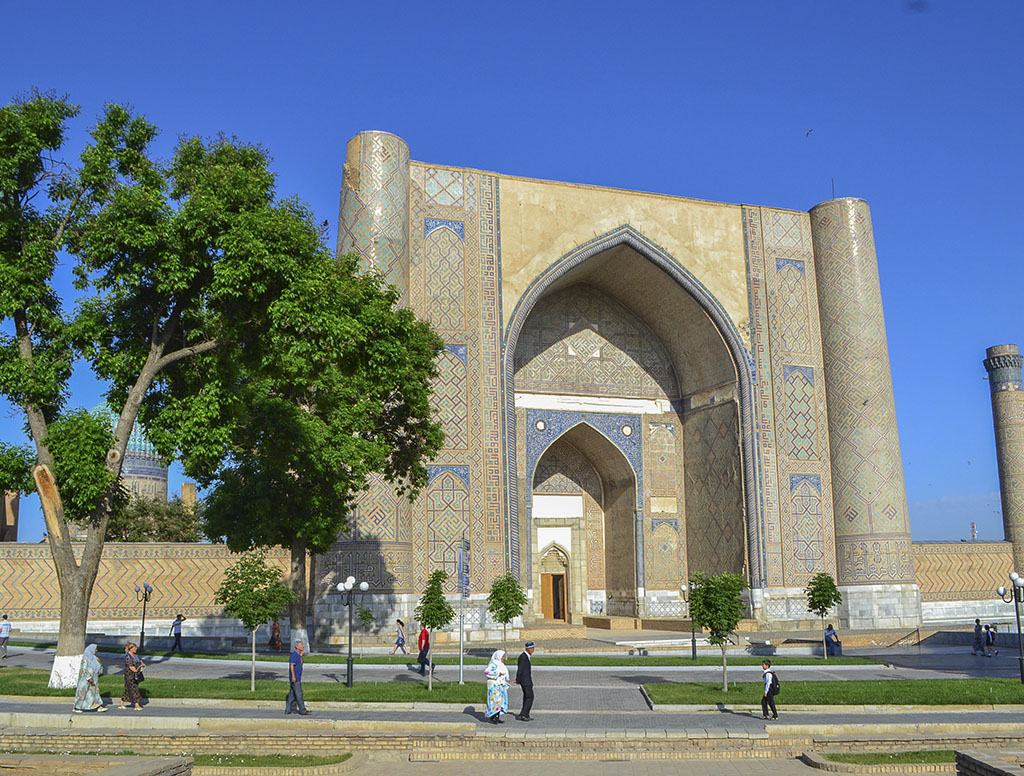 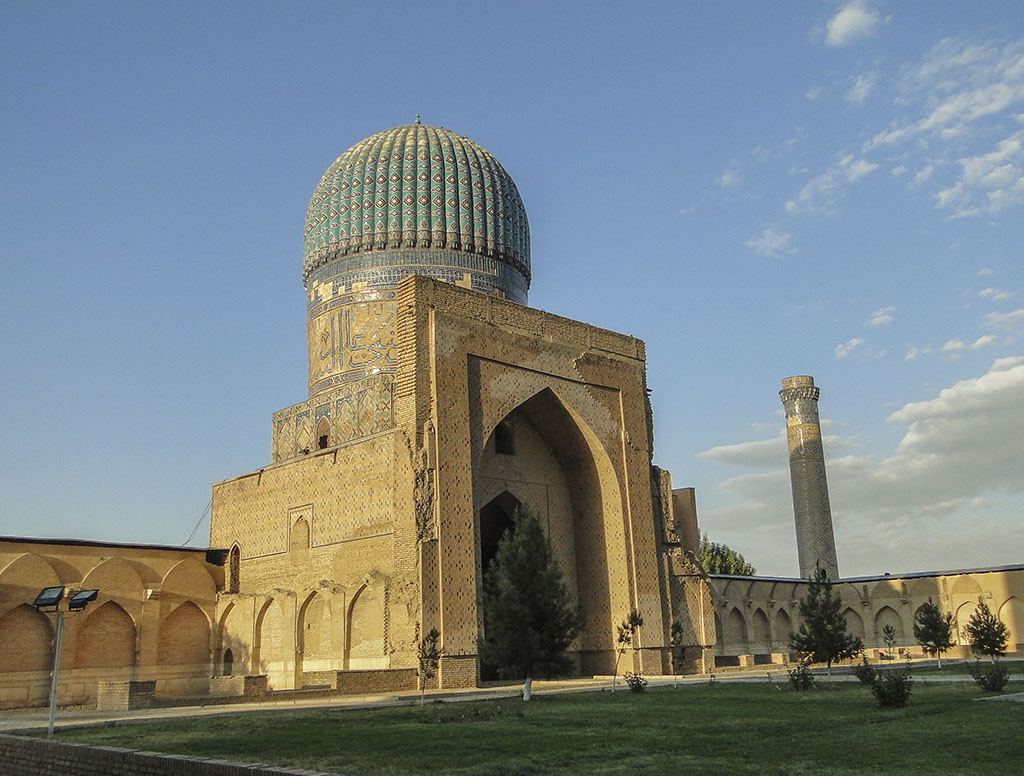 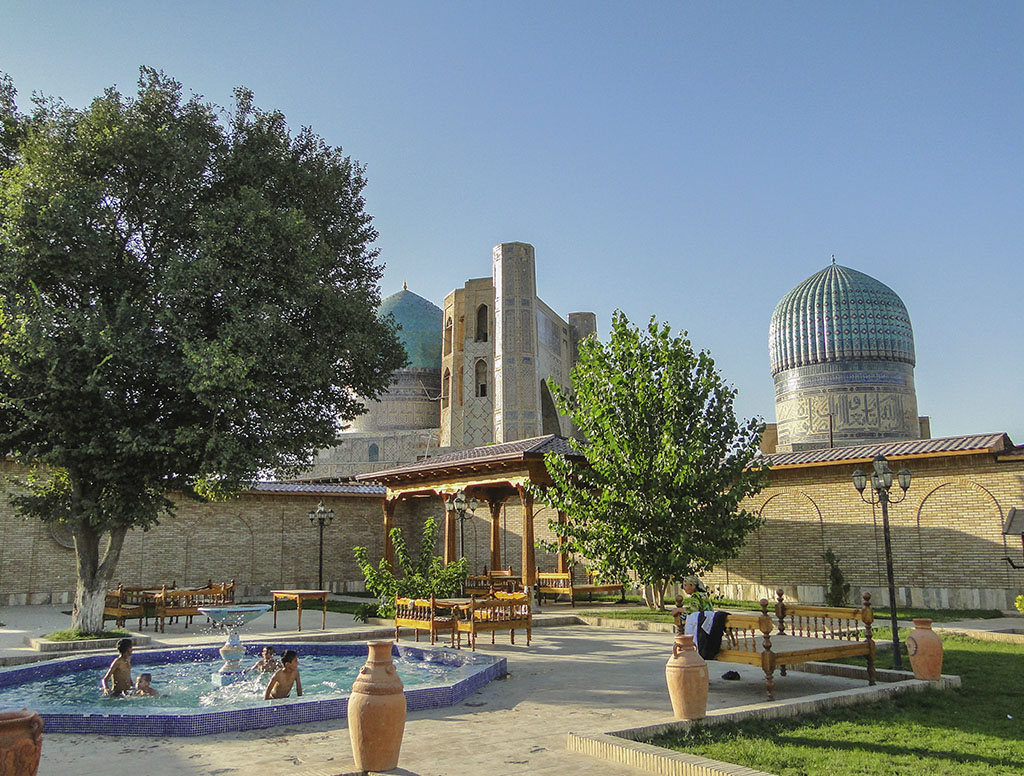