Bearing the name of ‘the pearl of Central Asia’, the Registan Square is regarded as one of the most beautiful squares in the world. The place gained fame through unique medieval oriental monuments surrounding it on three sides and forming a beautiful architectural ensemble: the Ulugbek madrasah (1417-1429), the Sher-Dor madrasah (1619-1636) and the Tilla-Kori madrasah (1646-1647). This ensemble occupies a place among the most significant constructions of the Islamic world.

All the three madrasahs (ancient oriental religious institutions) face the centre of the square forming a harmonious composition. Each construction is distinguished by its unique décor – stone-carved filigree patterns decorating the walls and portals. Blue domes upon the madrasahs are made of baked brick and covered on the outside with glazed tiles, which glitter in the sun whatever direction it shines from.

According to a legend, the name Registan is derived from the sand (’reg’ – sand, ‘stan’ – place, that is, ‘Registan’ – sandy place), which once covered the whole area of the square and soaked the blood of executed persons, public executions having been carried out there up to the early 20th century.

The formation of Registan as the main trade and craft centre of Samarkand began in the 14th-early 15th century. It was Ulugbek (1394-1449), Tamerlane’s grandson, who started the construction of monumental buildings in the Registan Square.

At the time of his rule the first building of the complex, the Ulugbek madrasah (1417-1420), was built. The madrasah consists of a rectangular court surrounded on four sides with constructions. In the back side of the madrasah there is a mosque, the corners of the construction are flanked with four minarets. Two tiers of arches face the court on three sides, and behind the arches are fifty khujras (small rooms), which once accommodated over one hundred students studying at the madrasah. The most prominent oriental scientists of the 15th century, among whom were Kazi-zade-ar-Rumi, Jemshid Giyas ad-Din Al-Kashi, Ali-Kushchi and even Ulugbek himself, delivered there lectures in astronomy, theology, mathematics and a number of other subjects.

After Ulugbek’s death, the emir of Samarkand, Yalangtush, continued the construction in the square. During his rule (first half of the 17th century) two more monumental buildings, the madrasahs Sher-Dor and Tilla-Kori, were constructed. These constructions are distinguished by large sizes and beautiful decoration; however, they are inferior to their prototype, the Ulugbek madrasah, in terms of architecture and artistic design.

The Sher-Dor madrasah (‘sher-dor’ – lions’ abode) was built two centuries after the Ulugbek madrasah, on the site where in Ulugbek’s time a khanqah (Sufi convent) was situated. The building was designed by architect Abdul Jabbar and was being constructed for almost 17 years, from 1619 to 1636. The Sher-Dor madrasah is almost a mirror reflection of the madrasah of Ulugbek, but having different proportions, however. The walls of the building are covered all over with quotations from the Koran. Visible in the centre of the arch of the entrance portal are swastikas. The outer facades and those facing the court are decorated with great skill and imagination. The architectural décor features ornamentation of glazed bricks, mosaics and gold painting. The mosaic panels of the arches in the court contain numerous flowers and sprouts interweaving in a complex decorative pattern. Unlike the exterior décor, the interior decoration of the khujras (rooms) is austere and ascetic.

Ten years after, in 1646, the construction of the Tilla-Kori madrasah started on the site of a caravanserai that had stood in the Registan Square before. The construction lasted fourteen years and was finished in 1660. This building closed the Registan Square from the north, thus finalising the formation of an integral architectural ensemble. Apart from its main task of teaching students, the Tilla-Kori madrasah also served as a cathedral mosque. On the inside the walls and dome of the mosque are covered all over with gold painting performed in the kundal technique. The mihrab indicating the direction of Mecca and the eleven-step minbar (a pulpit in the mosque) are also decorated with gold. The large amount of gold used in the ornamentation determined the name of the Tilla-Kori madrasah, which translates as ‘gilded’ or ‘decorated with gold".

Thus, the present-day appearance of the Registan Square was ultimately formed in the 17th century.

In 2001 the Registan ensemble, together with other ancient buildings in Samarkand, was included in the UNESCO World Heritage list. 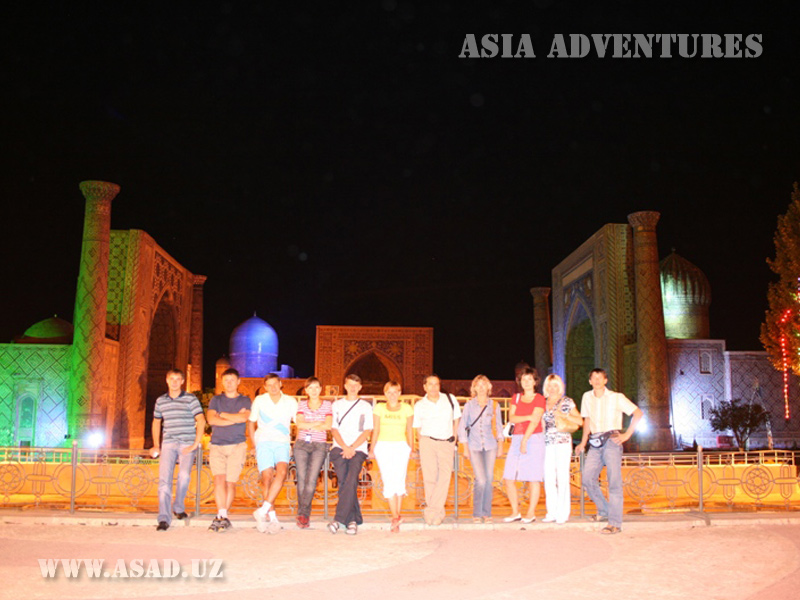 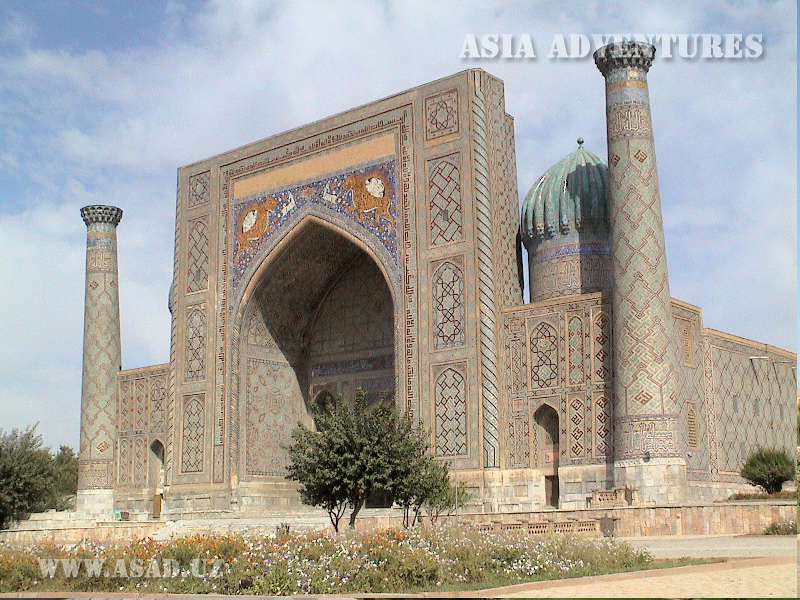 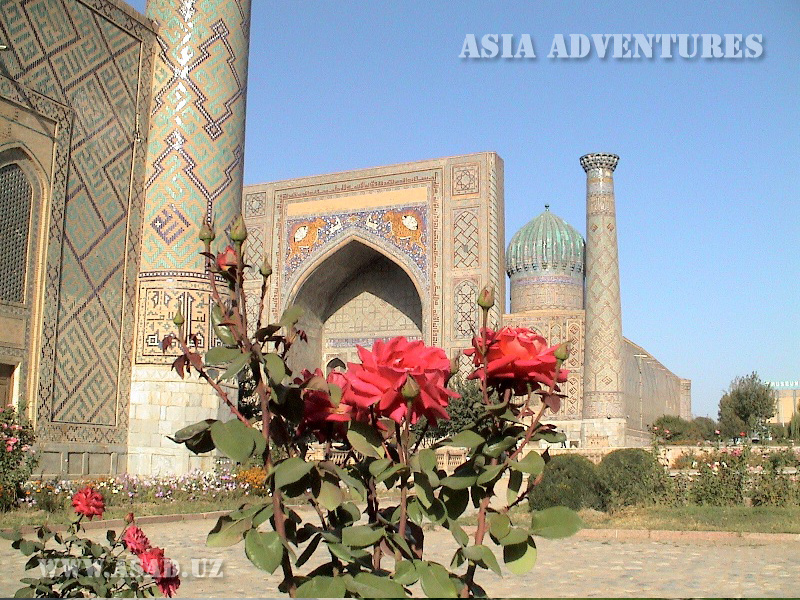 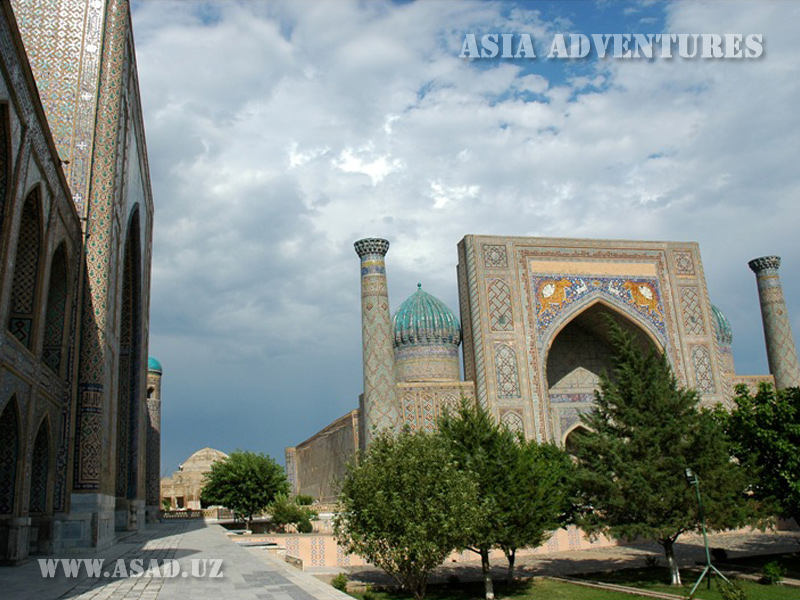 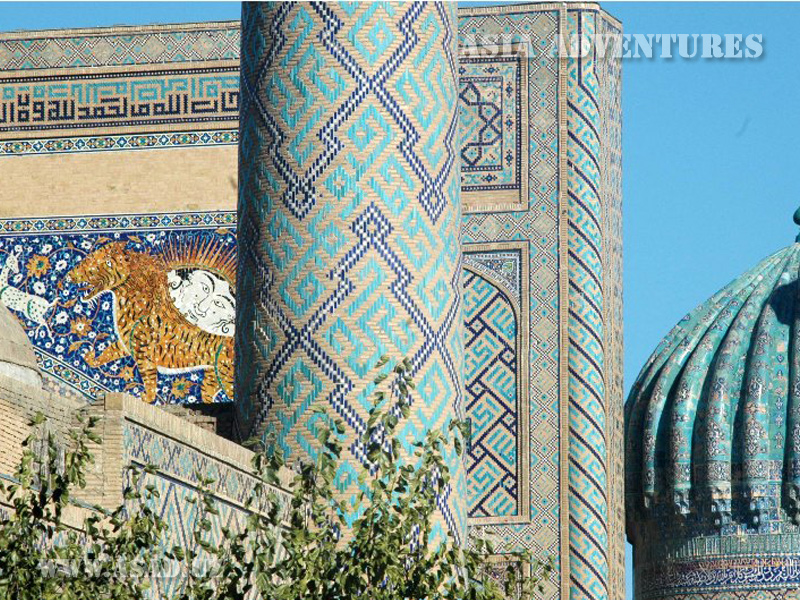 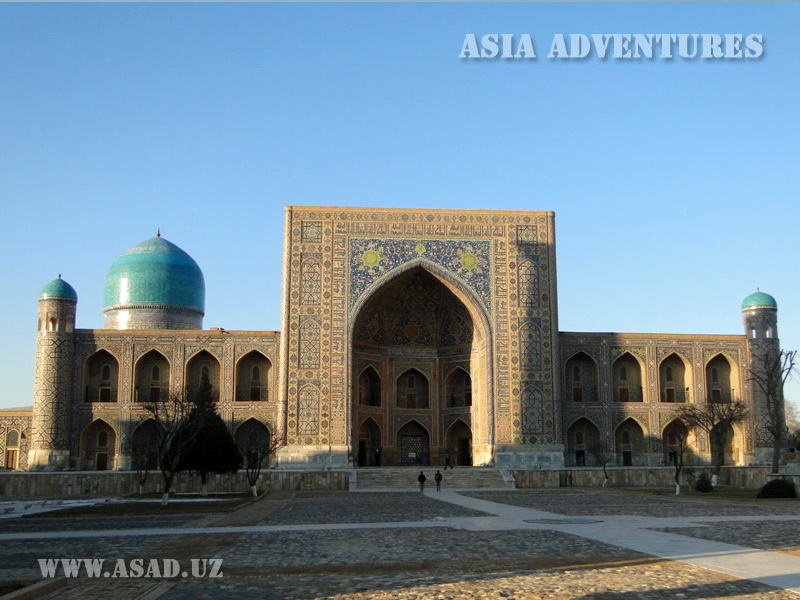 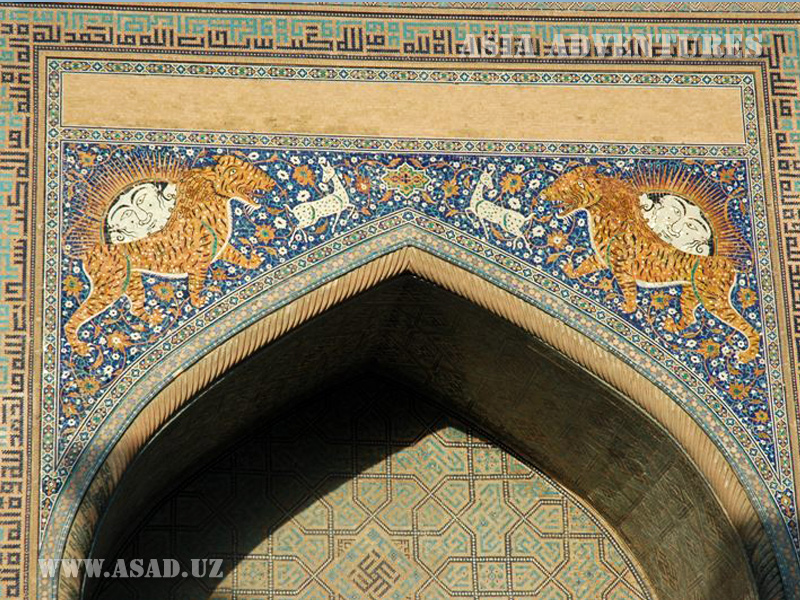 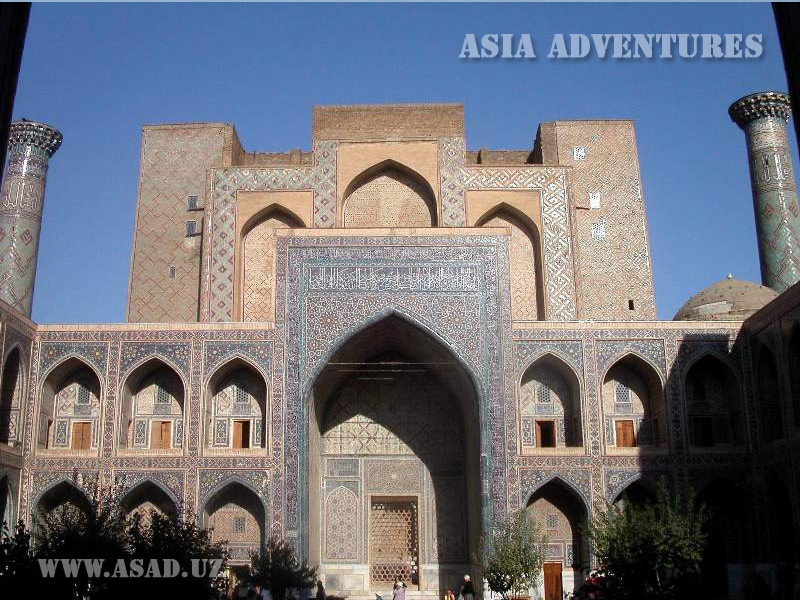 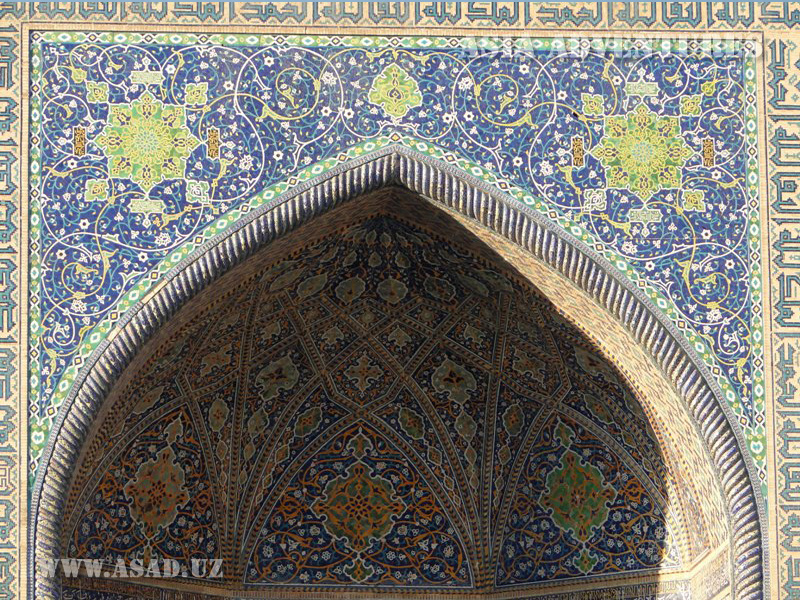 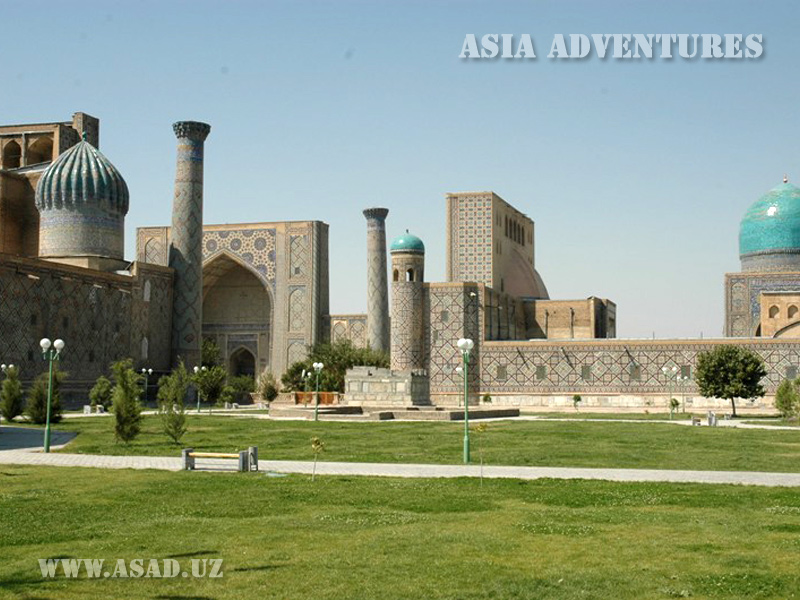 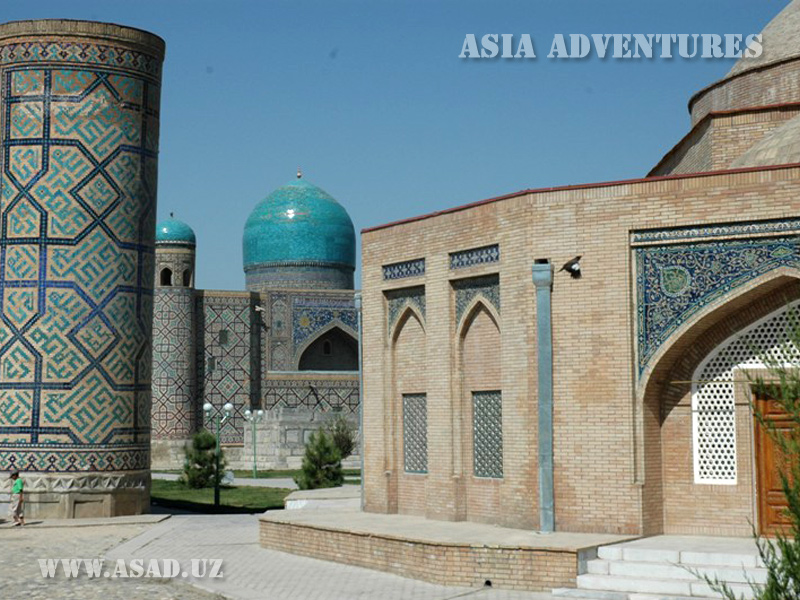