Khast-Imam (Khazrati Imam), a cultic architectural complex and the religious heart of Tashkent, is located in the old part of the city amidst ancient wattle-and-daub houses.

The complex formed around the grave of outstanding Muslim scholar Khazrati Imam (full name Abu Bakr Muhammad Kaffal Shashi), who was one of Tashkent’s first imams. Khazret Imam was born in 903, in Tashkent, which at that time had the name of Madina ash Shash, into the family of a skilled kaffal (craftsman specialising in making sophisticated door locks). The boy was named so after the first caliph and the Prophet’s senior companion. Abu Bakr is recognised as a talented poet, mystic and theologian, who was an expert in the Koran, Hadith, Islamic Law and lexicology. Khazrati Imam died in 976-77. According to a 12th-century biographer of Abu Bakr, ‘no other scholar could rival him in Maverannahr in that period…’

Kaffal Shashi's tomb is the complex's main element, which has become a place of pilgrimage. In the 16th century, when the region was ruled by the Sheybani dynasty, a majestic mausoleum was constructed over the grave, which at that time was one of the city’s principal objects of worship. Later, an extensive cemetery with numerous shady trees spread southward of the tomb. In the mid-16th century the complex included the mausoleum and the Barak Khan madrasah, which, together with two other tombs – those of Suyunji Khan and an unknown person, formed a singe ensemble. In 1579 a new mausoleum was constructed over the grave of Sheikh Babakhoji.

In 2007 the eclectic set of old buildings was reconstructed into a new architectural complex, uniform in idea and style, occupying an area of 2 ha. Currently, the complex includes the Barak Khan madrasah, Tilla Sheikh mosque, Muyi Muborak madrasah, Kaffal Shashi mausoleum, Namazgah and Shash Imam mosques (the last being the largest mosque in Tashkent) and the Administration of the Muslims of Uzbekistan. The current name of Khazrat Imam (Khast Imam) was given to the ensemble in honour of Sheikh Kaffal Shashi.

The Muyi Muborak madrasah was built in the 16th century. The name ‘Muyi Muborak’ (‘a holy hair’) derives from Prophet Muhammad’s hair kept at the madrasah. Currently, the madrasah houses the library of the Administration of the Muslims of Uzbekistan, which contains rare manuscripts and the Koran of Caliph Osman (7th century) – the world’s oldest manuscript consisting of 353 unusually large parchments with the earliest version of the Koran. Tamerlane brought this Koran to the territory of present-day Uzbekistan after his Turkish campaign. The manuscript was first placed at the Bibi Khanum mosque in Samarkand. Many centuries later it was transferred to Saint Petersburg’s Hermitage and then to the Administration of the Muslims of Russia in Ufa, after which it was returned to Uzbekistan.

The Barak Khan madrasah was built in the 16th century. Between 1950 and 2007 it housed the Spiritual Administration of the Muslims of Uzbekistan. Today the building is occupied by craftsmen, who produce there their original souvenirs and sell them right in the place.

The Namazgah mosque built in 1965 ranked at the time as one of Tashkent's largest mosques, a place where the main prayers of the Ramazan Khait and Kurban Khait holidays were organised. Since 1971 it has housed the Tashkent Islamic Institute.

The large Khast Imam cathedral mosque was built in 2007. The construction continued 4 months to be completed to the date when Tashkent was proclaimed as the city of the Islamic culture. The mosque is a symbol of the unique Tashkent architectural style: a terrace with twenty fretted wooden pillars near the main entrance adorns the front of the building. The mosque features two large blue domes decorated inside with gilded ornaments, like those at the Tilla Kari madrasah in Samarkand. The apertures in the domes are arranged in such a way as to admit sunlight inside the mosque throughout the day, from sunrise to sunset. The main entrance of the mosque is flanked by two minarets 53 m high. Over 10 thousand people can simultaneously prey inside the mosque.

A park with exotic trees, shrubs and flowers brought to Uzbekistan from all over the world was organised within the complex. In spring, summer and autumn storks can be observed sauntering across the territory of the ensemble. In the night time the architectural monuments illuminated in a special way make one feel as if they are in the world of oriental fairytales. 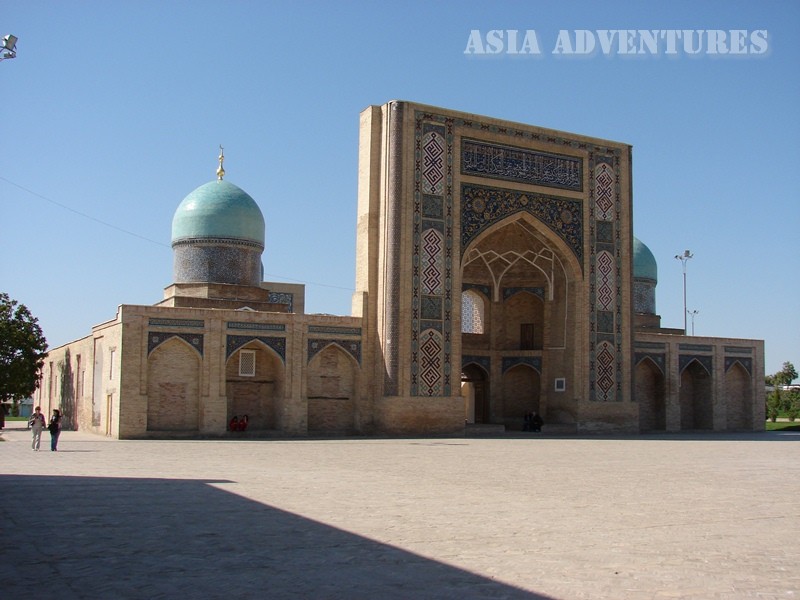 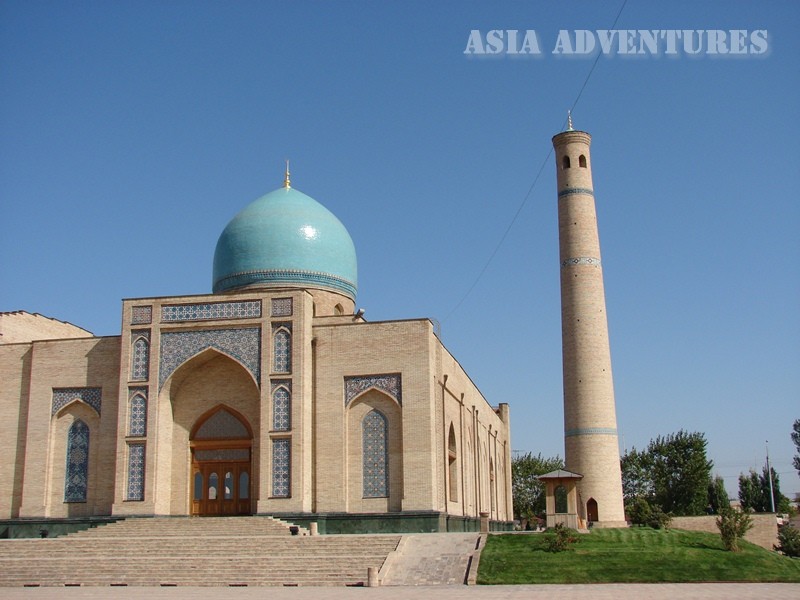 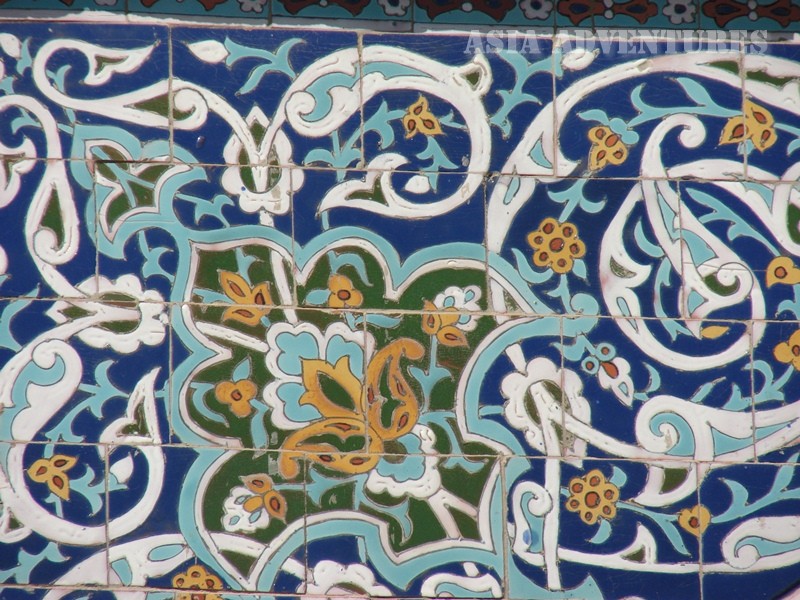 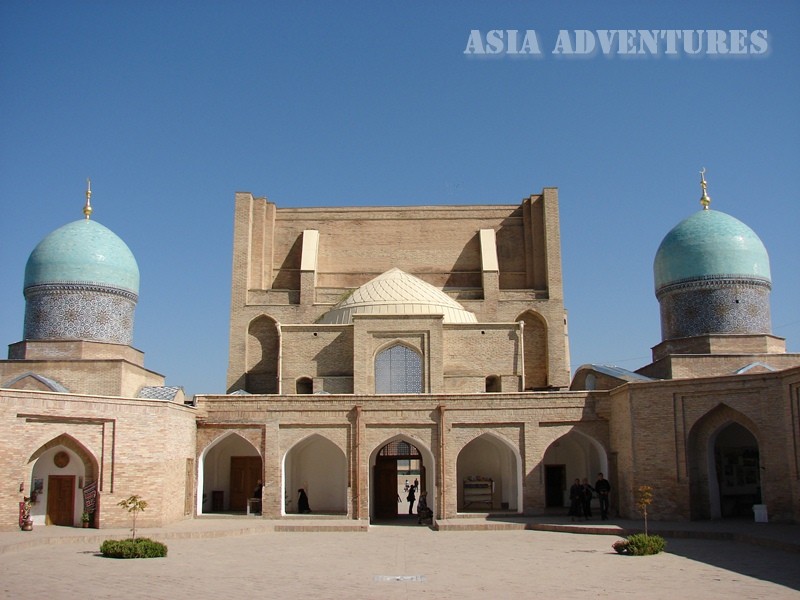 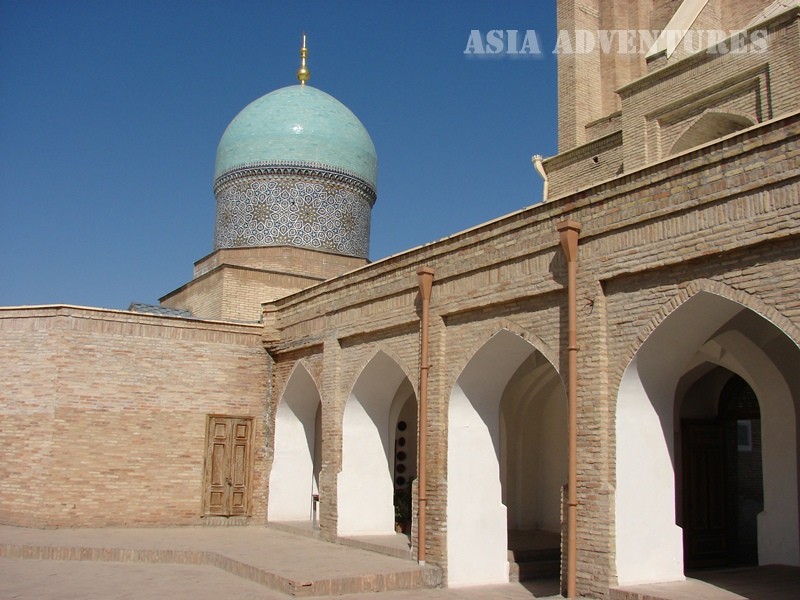 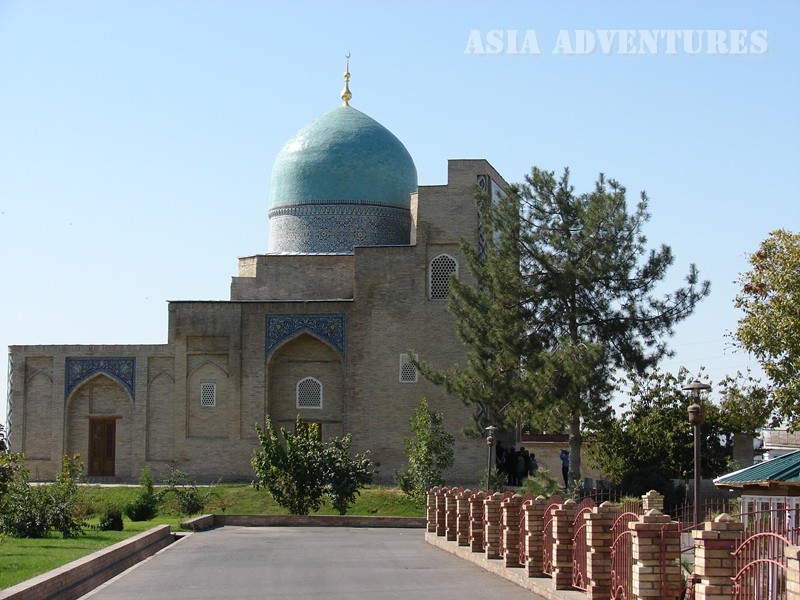 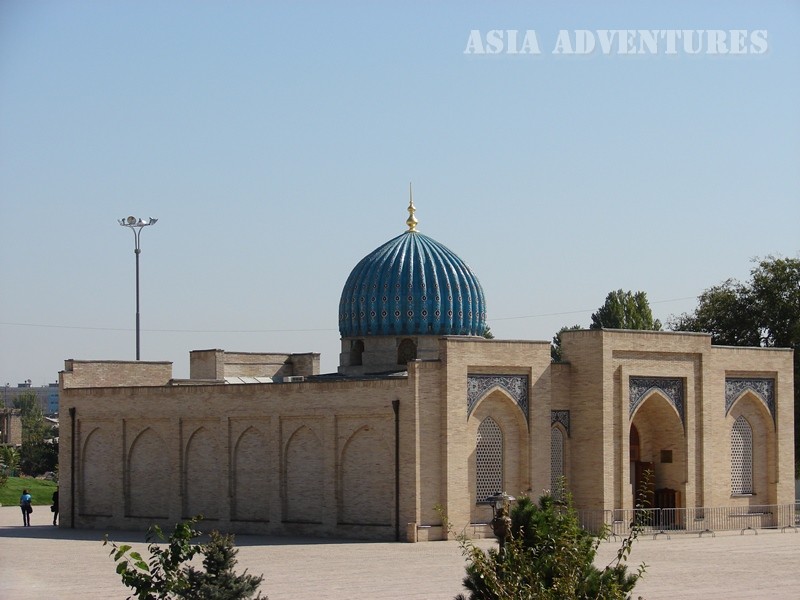 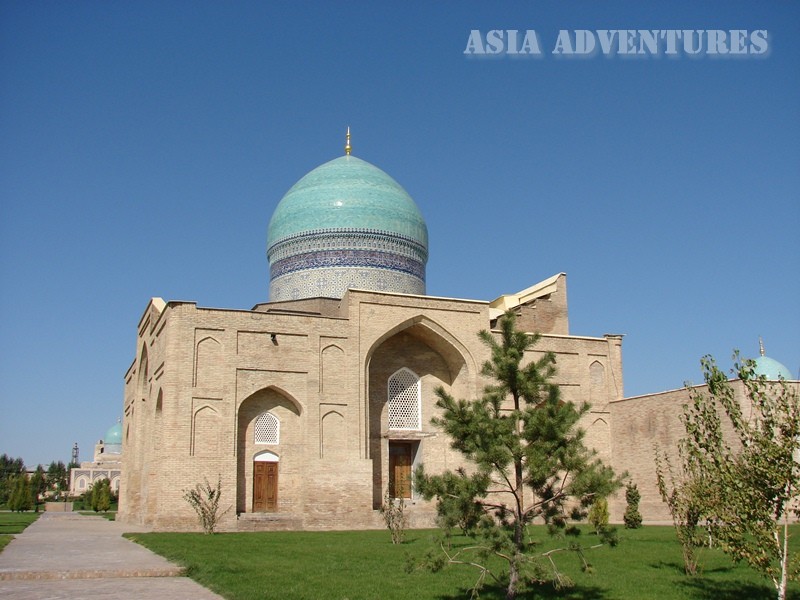 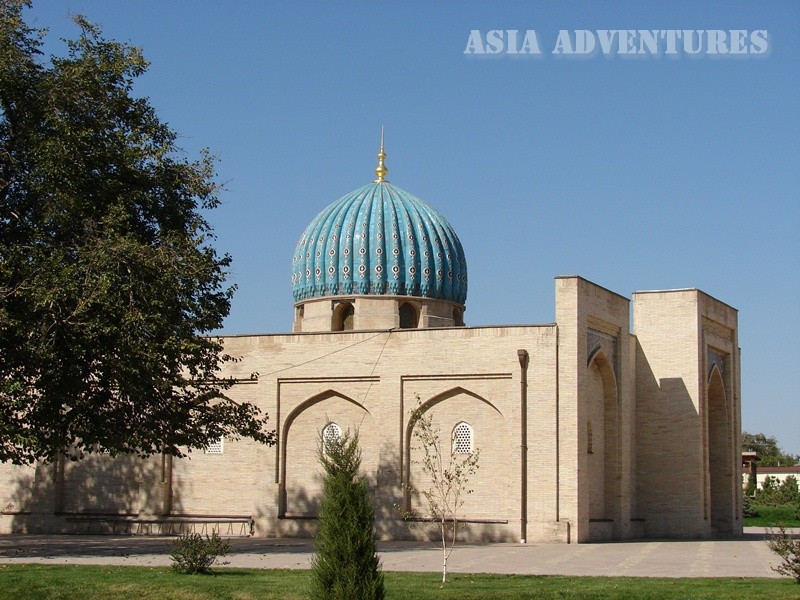 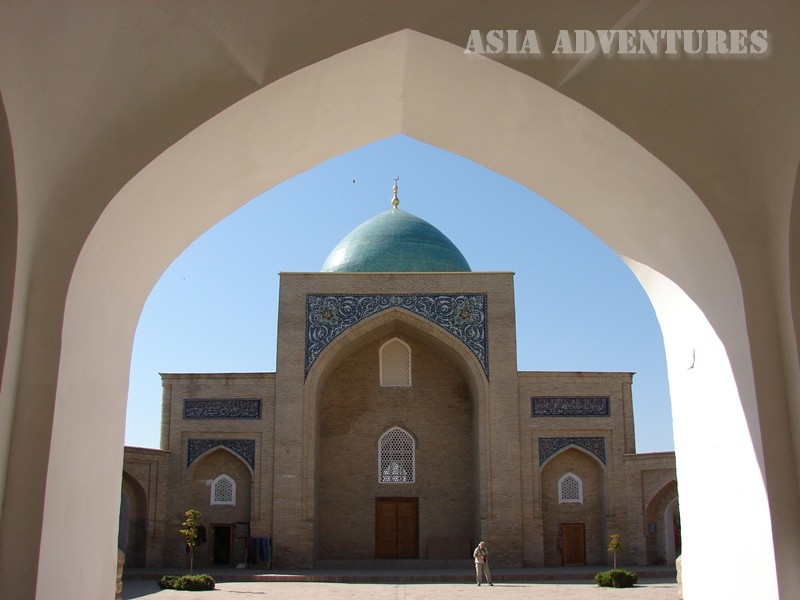 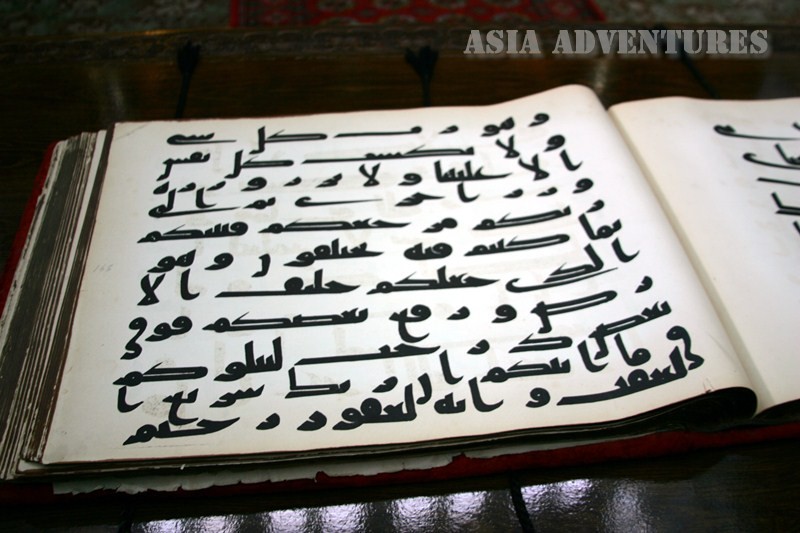